John L. Walters on the break-ups and tearful reunions of Rock Family Trees 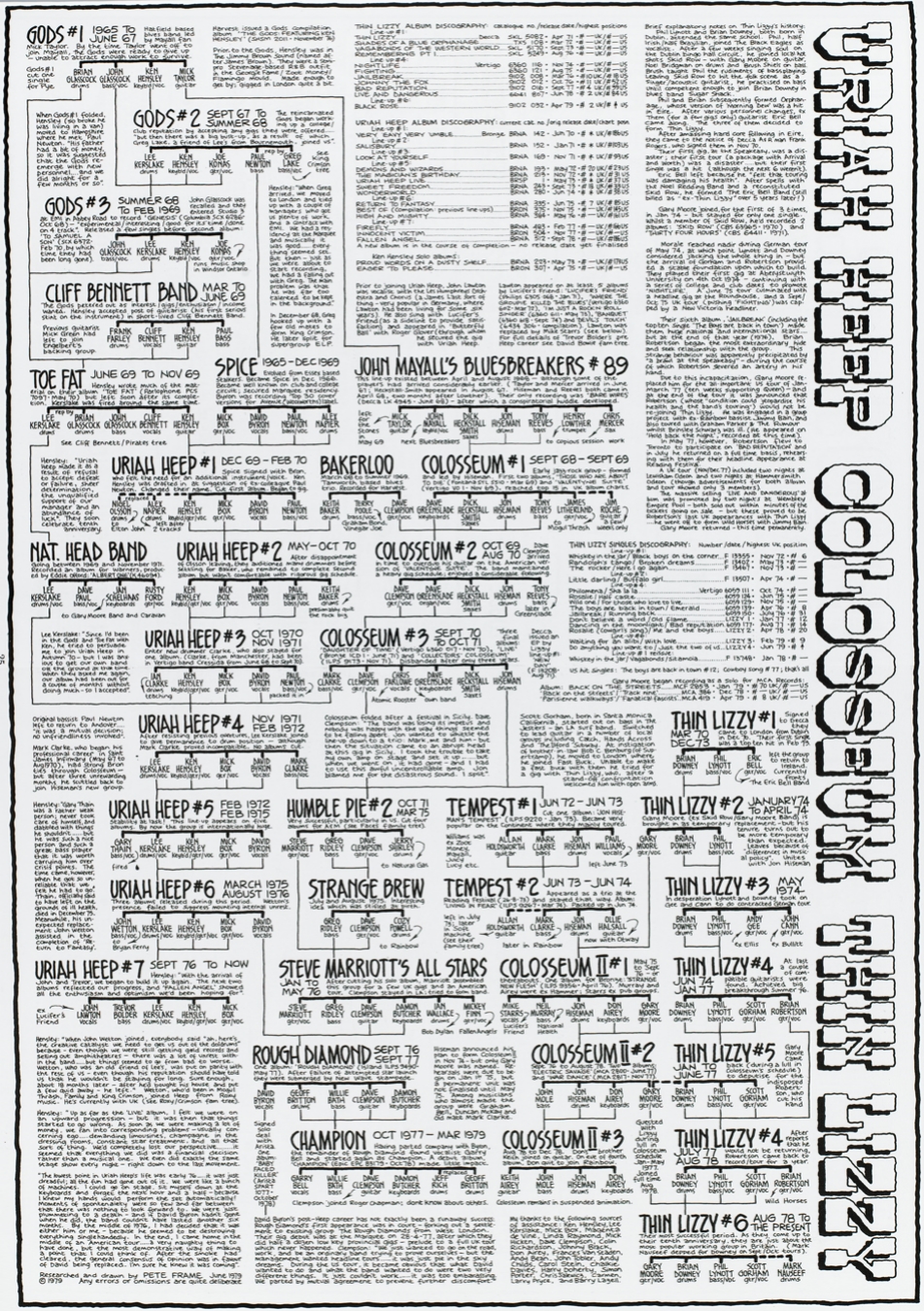 Pete Frame’s Rock Family Trees have been part of the music design landscape since the late 1970s, when Frame – previously founder, editor and self-taught designer of Zigzag magazine – started making them for the UK’s music press, and for album sleeves and concert brochures.

For Frame, the family trees were a graphic solution to an editorial problem, a compact way of showing the often tortuous progress of bands and supergroups through bust-ups, firings and reunion tours.

‘They started as a result of my obsession with detail,’ he says. ‘Before I interviewed a musician I would write copious notes on a big piece of paper, with arrows and asterisks all over it, and over a couple of years, these developed into rudimentary family trees. The first attempts were pretty crude and spindly but gradually they became more convoluted and detailed. Doing it pictorially seemed like the perfect way to explore the history of a band or a scene.’

Each family tree required immense amounts of research and legwork. A careful design would sometimes be thwarted at the last minute by band break-ups: ‘I’d have almost finished a tree, only to get a phone call saying that some twat had left and a new guy (inevitably with a long pedigree) had replaced him. You can’t just tack a bit on to the bottom: you have to start again.’

Frame did most of his work clambering and crawling on a home-made table, surrounded by scraps of paper covered with information. The lettering was a modification of traditional architectural lettering, which he knew from his time as a trainee surveyor.

His meticulous constructions are flavoured by a love of the music, human curiosity, a powerful critical sensibility and, in the case of some charts, righteous indignation about the commercialisation and dilution of authentic music.

Frame’s own favourites tend to be the ones with the least popular appeal: ‘The Folk Music Revolution in Greenwich Village’; ‘Surf City Here We Come’; and a Merseybeat series, some of which are on display at the Museum of Liverpool Life. He notes ruefully that these are the ones ‘which take longest to research and draw’. His format works best for working bands – Fleetwood Mac, AC / DC, Soft Machine – slogging their way around the live circuit from pubs to clubs to stadiums (and often back again) with occasional pauses to record new albums.

In the 1990s, his trees became the backbone of a BBC TV series narrated by John Peel. Earlier this decade, novelist Jonathan Coe commissioned a bathetically truncated tree for Ben Trotter, the main character in The Rotters’ Club.

The tree structure has not adapted well to our current era of producer-dominated pop; nor to reality show kids who rise without trace. Yet Frame has retained his love of the music through three decades of trees, and an admiration for ‘anyone who’s having a go, irrespective of whether or not I like their music’. He dedicated the first Rock Family Trees book ‘to ‘anyone who ever climbed into a van to go and do a gig’, and I suspect his heart is still there, in the back of a band’s battered Transit.