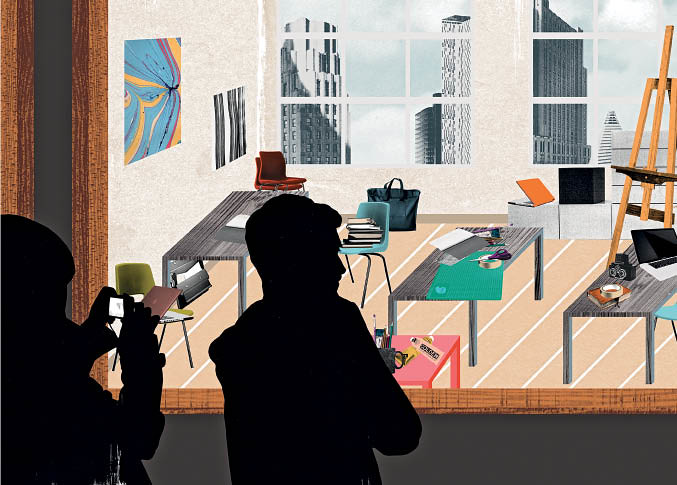 A few years ago, I found myself in one of those academic workshops geared to speculate on ‘future models’ of course delivery in higher education. The territory was all very familiar: lots of talk of credit transfer and flexibility, of synergies, abrasions and temporal collaborations; the kind of stuff that excites some educators and terrifies others. And then, from one colleague, out it came: ‘What about one-year degrees?’

At first it seemed absurd, hilarious in fact: the pedagogic equivalent of fake tan or a stick-on beard.

Then I realised this was a serious proposal. He went on to describe how a friend of his – a doctor who held ambitions to become an artist – would be ideally suited to such a course. Unlike the average school-leaver he wouldn’t need to labour through unnecessary projects and essays, he would have experience and maturity!

Fighting the temptation to enquire whether my colleague would be willing to be diagnosed by an artist with a one-year medical degree, I looked around the room for objections, someone to shoot the suggestion down before it made it into the minutes of the meeting. But no, it met only with a silence located somewhere between recognition and dread.

Republic of ideas
A couple of years on, and this proposal no longer seems so ridiculous. Indeed, global recession has created what appears to be an ideal climate for AIRs (Accelerated and Intensive Routes of delivery).

A recent funded study in England [1] confirmed that ‘fast-track degree’ students outperformed those on three-year degrees ‘by an average of two thirds of a degree classification’. And it seems that in the future, fast track will be one of many routes on offer. As the chief executive of BPP, Britain’s newest private-sector ‘university college’ recently noted, ‘The education landscape is changing, and over the next decade we will see a different picture emerging, where both students and employers will drive demand for their preferred method of study and training.’ [2] So what is driving this change?

Currently the issue of what actually constitutes a degree is lost within arguments of who should pay for it. In England, the recent, highly controversial rise in tuition fees enables universities to charge up to £9000 per year.

Those applying to study art and design subjects in England will be equally dismayed by the relocation of their teaching budgets into ‘Science and Technology’. And so, from 2012, the survival of ‘low-priority’ courses such as graphic design will depend entirely upon tuition fees, which will need to be raised without incurring a loss of ‘customers’.

Some observers see the severity of these measures confirming a shift in higher education leadership from the west towards the east Asian or ‘Confucian’ zone, an area that includes China, Japan, South Korea, Singapore and Taiwan, and which blends private investment with tighter state control. [3] One characteristic that distinguishes the Confucian model is the expectation that families will readily invest in a child’s education from school right through to university, leaving the state to focus funding upon the elite and high-end research institutions. In contrast, western families expect some form of state support as a means of supporting the greater public good.

Depending upon age, people in the UK have different ideas of what higher education actually is. Some may still have an image caught somewhere between the sherry-addled dons of Lucky Jim and the prowling lefties of The History Man – both occupying a privileged, high-altitude space paid for by the state and made available – mainly through grants – to the higher-end achievers. Back then the ‘art school’ existed either as a distinct institution or as part of a larger polytechnic.

Those like myself, who studied during the Thatcher years, will recall the effects of spending cuts as many art schools were swallowed up into new and ambitious universities, leaving bewildered staff to conform to alien management structures and modes of course delivery.

And, more recently, the Blairite ambition to widen access has driven a huge increase in student numbers, with bloating bureaucracy and, sadly, for many design courses, a subsequent crippling loss of studio space and teaching budgets.

While increased access has partly compensated for the lack of opportunities in other UK employment sectors – such as manufacturing – it has also raised the expectation that higher education is both accessible and affordable. With the sharp rise in fees, this expectation has been cruelly snatched away from many.

For those who see education merely as a route to employment, the fast track will seem an attractive alternative. And for those wishing to become graphic designers, why bother with a degree? With an absence of a recognised charter anyone can practice. Shillington College – which operates in the US, Australia and the UK – supports its claim that ‘a world class education needn’t take forever’ by pointing to a host of well placed alumni from its three-month and one-year part-time courses. These cost a fraction of an undergraduate degree course, and in return offer studio space, a Mac for each student and contact with industry professionals. Students looking to the traditional degree for something deeper may find the environment not as they expected, since, in the shift to embrace instrumental and quantitative values, the promise inevitably begins to warp.

Art school has traditionally offered a kind of breathing space, a region described by Francis McKee as a ‘mental “free-state”’ and a ‘republic of ideas’. Yet for the cash-strapped student, mindful of future tax obligations, time becomes an enemy rather than a friend. The space to speculate, to daydream, to get things wonderfully wrong has to be carefully budgeted, since it comes at a price. Similarly, the investment required to hone and refine skills, to do a job well for its own sake, needs to be balanced against future employability in an industry that does not always share such concerns.

When buying time the element of risk – which is necessary to all genuinely creative endeavour – becomes magnified, curiosity is stunted and fear can creep in. Professor Simon Marginson of the University of Melbourne notes how in the most mature Confucian systems the sudden-death competition ‘brutalises adolescents’ [4] and it is hard to imagine how creativity can survive under such pressure.

The expectation of the UK government is that standards of tuition will be raised to meet the demands of the market. But in graphic design this quickly becomes problematic, since the range of activities bundled into the term contains all manner of practice, scale and intent, and this is reflected in what employers look for in a graduate portfolio. Some want immediate payback; others are prepared to invest time in raw and original thinkers. Some look for something specific, to suit the focus of the studio or to address a gap in skills; others prefer good ‘all-rounders’ with the flexibility to adapt to different situations. The challenge to educators is not so much to meet the needs of industry but to maintain a learning environment that recognises professional diversity.

If the hope is that an intended rise in standards of tuition can somehow be accurately measured, then the grounds for optimism are questionable, to say the least. Under the constant threat of litigation, how easily can genuine academic rigour be applied within a culture increasingly fixated upon league tables, surveys and RateMyProfessors.com? To apply the principles of the supermarket is to undermine the time and trust necessary to build any genuinely successful learning environment. As Professor John Sutherland of University College London concludes, in an education market where the customer is always right, ‘the cash nexus will, over time, rot the system – the delicate balance of authority and intellectual submission that makes education, at any level, work’. [5]

Space to think, space for culture
So it is hardly surprising to find that some of the most exciting developments are emerging outside institutional strictures. When describing their aims in recently setting up the virtual Parallel School (parallel-school.com), Samuel Bonnet and Mael Fournier-Compte talked of the need to create a ‘hiatus where everything is permitted, where mistakes and weird ideas are a necessity … where education becomes once again a place of elevation, and not an answer to hierarchically defined standards and market needs’.

The irony in Britain is that when art schools have operated with this kind of freedom they have made an unquestionable and huge contribution to the economy. As if to confound the auditors and performance indicators, much of this success cannot be measured in the short term, often coming through those who might barely scrape a degree but who flourish in the only space available to think with any degree of independence. Without them where would the British music industry be? And then there’s Brit Art and Cool Britannia, both championed to exhaustion in recent years.

If the auditors were to look at the bigger picture, the Nation Brands Index [6] recently confirmed that Britain is still recognised as both an excellent place to study and one of the world’s leading providers of contemporary culture. The connection seems obvious, but sadly not to those who make policy.