Colour is the new black

For the past decade or so, Mark van Wageningen has been investigating the possibilities of adding colour to the conventional black-and-white universe of digital type design, resulting in work that is both thrilling and evocative 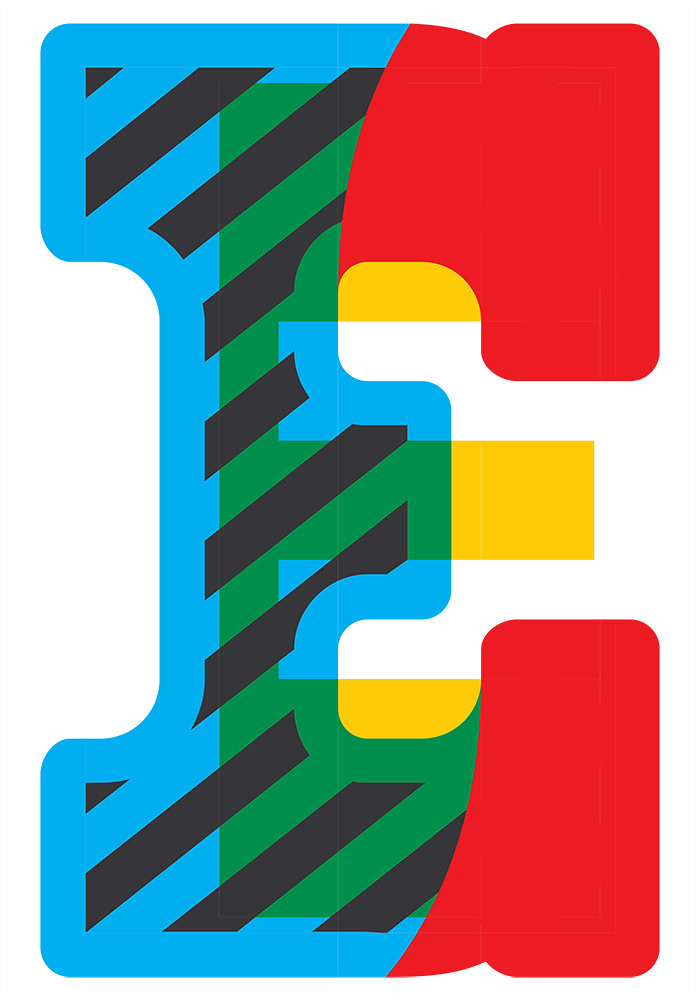 Mark van Wageningen of the Amsterdam foundry Novo Typo recently caught the international type scene’s attention with a handful of projects featuring inventive and innovative colour fonts. He is, however, by no means a newcomer. During the past two decades he has been a book designer, identity designer and type designer, often seeking highly personal solutions to pedestrian problems, making irreverent work that challenged the viewer (and the client) with charming, unusual, yet approachable results. Now that he has decided to focus on what is also known as chromatic type, his long years of broad unorthodox activity are paying off.

The term ‘chromatic type’ is now mostly used to denote digital type families designed to create multi-coloured designs by layering frames in layout programs. Many of the designs lean heavily on the aesthetics of the mid-nineteenth century: trompe l’oeil effects galore, with bevels, 3D-shapes, inlines and shadows. Van Wageningen’s work has managed to shake off those nostalgic elements. Eschewing Victorian ornamentation and third-hand Modernism, his Novo Typo project explores ways to deconstruct letterforms, rebuild them from multi-coloured fragments, and present them as something surprisingly usable. Not just that: the fonts are also in a format that allows all colours to be packed into a glyph, resulting in multi-coloured web fonts. When it comes to suggesting new ways of using colour in typography, Van Wageningen is suddenly miles ahead.

It hasn’t always been that way. In the 1990s and early ’00s, Van Wageningen designed mildly unconventional book covers and posters, often adopting self-designed typefaces in grunge-like styles that digitally represented the handmade. Several of these were subsequently published at Linotype and Montreal’s 2Rebels. There were some avant-garde elements in his most unorthodox typeface project of the period, Gagarin (published 1998-2003). Van Wageningen’s presentation of the face was typical of his tongue-in-cheek approach: ‘Compared to a real family, a typographic family is usually a rather dull show. Where is the criminal nephew? Where is the uncle who knows all kinds of tricks?’ With a wide range of styles designed within the same geometric grid, Gagarin aimed to provide all that and more. The series even included two ‘female’ fonts with incongruous calligraphic contrasts, created at Van Wageningen’s request by left-handed designer Nele Reijniers.

Throughout the 2000s, Van Wageningen’s urge to experiment and push back frontiers grew stronger. The cookbook Kook is a case in point. The recipes are typeset as dense type constructions, intriguing yet verging on illegibility, built with a rounded, square sans serif designed especially for the book.

The moment, however, when Van Wageningen began to venture where no type designer had gone before was when he discovered colour fonts. In the mid-2000s he began exploring the possibilities of chromatic type, both from a design point of view and on a technical level. He designed a number of digital fonts that could be used to create multi-colour typography by layering various versions of the ‘family’, including fonts offering coloured fills, shadows and bevels. Van Wageningen was exploring this route with attractive display faces that could be layered, such as Guru, Wolf and Fata. These were conventional stackable fonts, to be used with frame-based applications such as InDesign and Illustrator.

His earliest attempt to create all-in-one colour fonts was a series of fonts made of pixel images – composed of flowers, or colourful strokes with a 3D-effect. He sees these photo-font attempts now as a valid phase in the process, but ultimately a dead-end street. ‘Working within the experimental, cutting-edge field of coloured type design,’ he says, ‘my work has a high trial-and-error factor … failure is always an option.’

In the early 2000s, design software companies developed formats that allowed type designers to pack colour into single glyphs, originally to support the use of full colour emoji icons. Noticing that phenomenon, Van Wageningen began to speculate about adding colour to the black-and-white, positive / negative universe of conventional (digital) typeface design. He was not interested in the decorative function of colour: to him, colour is a way to analyse or display the construction of each letter. And as a typographic tool to create distinction within a text, it was given a greater complexity than ever before.

‘My first serious attempts to design coloured typefaces, using a pixel-based design, yielded some nice typefaces, but their usability was very limited. The designs became too illustrative, too decorative; also, for various technical reasons this approach was not working out. The other technique, which is vector-based, is way more interesting, has much wider support, and the visual and technical quality is much higher.’

On the strength of his early experiments he was approached by typographically inclined front-end developer Roel Nieskens, who subsequently solved technical issues and created a project website. Nieskens had embraced Adobe’s new OpenType-SVG format, the most flexible of the formats that enable the use of colour fonts on the web.

Van Wageningen is convinced that the new technologies to design and use type are introducing new approaches and ushering in ‘a renaissance of type design’. While the type community has embraced technologies that streamline type design and production, or work magic with family structures as in the new format of ‘variable fonts’, their attention is largely limited to the black-and-white realm of conventional type design. Van Wageningen’s Novo Typo project is taking a different path. ‘If you are able to construct a character from its basic elements, then it is also possible to deconstruct a character into its basic shapes. These deconstructed parts can be divided over different layers, to which you then assign a colour.’ Working within this idea of colour-constructed type allows users to adopt colour for emphasising or lending distinction to parts of the text, replacing or expanding the more traditional text formatting. Van Wageningen boldly states: ‘Colour will be the new Italic. Colour will be the new Bold.’

With Nieskens’ help, Bixa, a stackable all-caps display typeface, designed as separate layers, was taken into the new realm of multicoloured web fonts using OpenType-SVG. Bixa was one of thirteen winning typefaces at the 2016 Type Directors Club (TDC) competition, and was immediately developed into a new project: Novo Typo Typewood. The various layers of the Bixa typeface – many of which only contain a part of each character, like a left or right vertical stroke, or a fill – were produced as large wood type fonts. The painstaking process of selecting the wood and the production technology was guided by Van Wageningen’s quest for a natural appearance. Testing a laser-cutting process on plywood yielded wood type that was too clean and smooth: ‘The results were too perfect and the experiment failed,’ he said. Testing with a CNC (Computer Numerical Control) router on three types of wood resulted finally in what Van Wageningen likes to call ‘the perfection of imperfection’.

‘Perfection is nice but perfection is also a bit boring. I like it when there is something that somehow looks wrong. Technically everything should work perfectly, but in the design I like to see happy mistakes. Things you cannot design on purpose, that happen just by accident.’ The Typewood-Bixa project resulted in an oversized brochure that combined offset and letterpress technique, as well as a series of posters showcasing multi-coloured overprinting of the various wood type fonts.

The latest phase in the quest is the typeface Ziza, demonstrated in Novo Typo Color Book, which features a preface by legendary type designer Gerard Unger (see Eye 40), who writes that ‘it may take a century or more for colours to become mainstream … Meanwhile [Van Wageningen is] coming up with some extraordinary work involving type and colour. It’s thrilling and evocative.’

Based on Bixa, the new Ziza font is a likeable family covering upper and lower case. It contains dozens of fonts of loose letter parts in a wide range of varieties, all compatible in some way or other: a mono-linear sans serif from hairline to black; a contrasted sans with calligraphic overtones; a stencil version. The book shows about a hundred of the infinite ways of combining these elements. Van Wageningen calls it a ‘visual investigation’ of the ways chromatic typography can be used in an editorial context. ‘If a designer wants to emphasise a word in a sentence, a sentence in a paragraph or a paragraph in a chapter, it is standard practice to use the italic or the bold version of the chosen typeface. Would it not be much more interesting if the designer [used] the chromatic version of the typeface? Colour will then constitute a key element within the organization of text and layout.’

Certain samples are somewhat bland, but many are very attractive. What counts is the experiment, and the research into the usability and readability of this innovative way of constructing text. Eric Gill’s dictum, ‘Beauty will take care of itself’, clearly resonates with Van Wageningen: ‘I am not interested in decorative type design. The designs may look beautiful or ugly, that’s a matter of personal taste … the initial goal is to start a discussion about the organisation of text combined with the use of chromatic type.’

Is legibility a concern? ‘Of course, but I try not to think about it too much,’ he says. ‘My approach to design implies that legibility in contemporary type design is a bit overrated. Every character is legible. If not, it is not a character anymore. Ruminating about conventions will keep you on the safe side of the line; it makes you conservative and conventional in your design decisions and will impede progress.

‘As for the acceptance of chromatic fonts,’ he continues, ‘I think it’s only a matter of readers getting used to it. It may take time, but this is not a reason not to design fonts like this. Typography is subject to constant change. The same is true for browser or software support: do I have to think and design within the possibilities offered by the major software companies? If some technical option is not available yet, you have to design it yourself.’

Van Wageningen would like the whole industry to adopt his new approach, so that the palette of a typographic designer will become much more interesting. ‘Wouldn’t it be nice if everyone could use chromatic fonts?’ he says. ‘Please consider my work as an invitation.’