Andrew Losowsky on the ‘nonsensical authority’ of the Approval Matrix 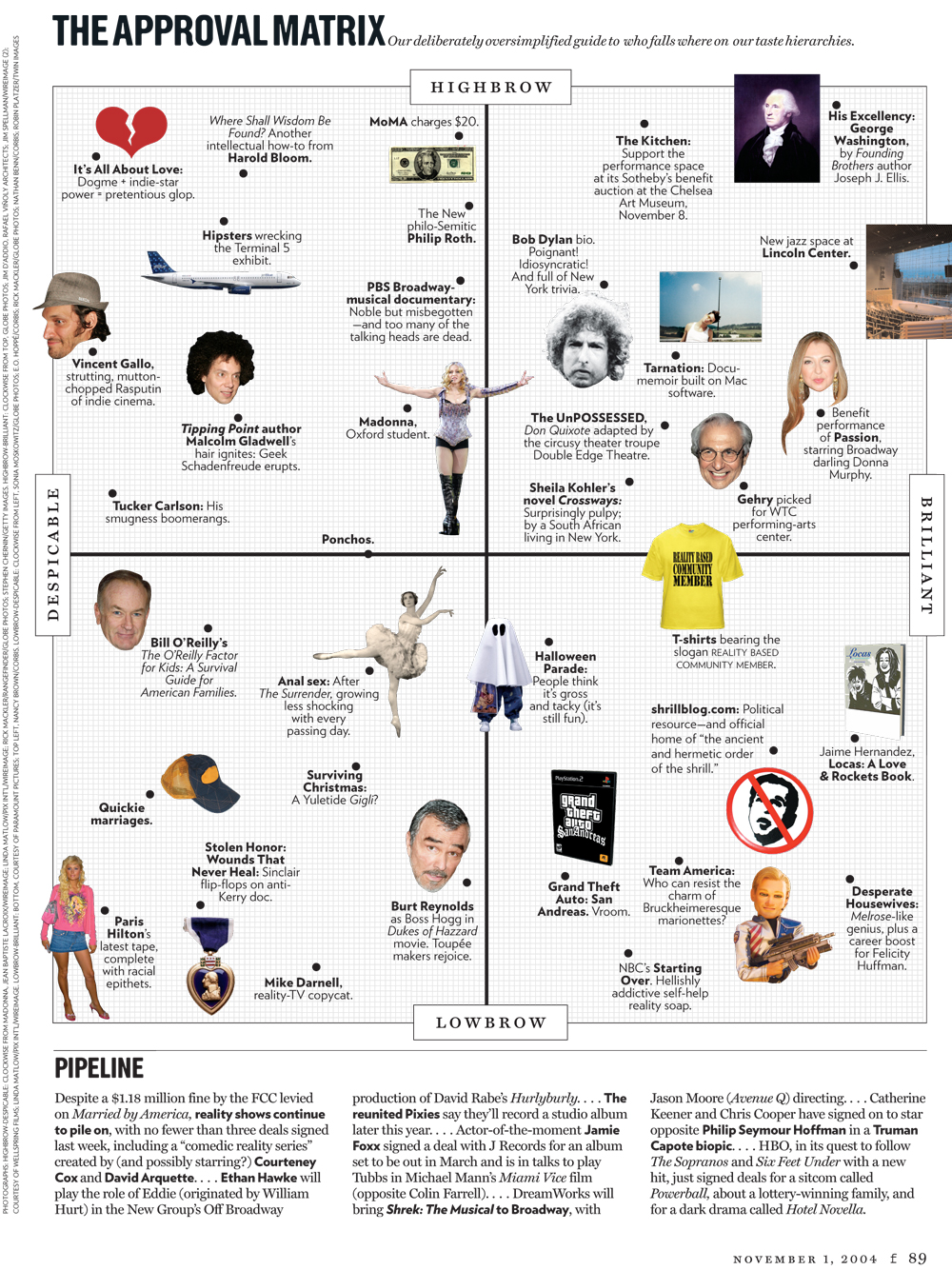 Every week for the past six years, the inside-back page of New York magazine has looked the same: two black lines and lots of simple cut-outs with short captions, laid out on a graph-paper grid.

This is the Approval Matrix, which has its own fan blog (behindtheapprovalmatrix.com) footnoting entries and is soon to spawn a spin-off pop-culture show on United States TV. As meaningless infographics go, it’s one of the most contentious: refreshingly simple, gloriously portentous and a must-read in Manhattan.

Much of the Matrix’s appeal comes from its basic design. There are four axes, with four labels: Highbrow to Lowbrow, Brilliant to Despicable. Somewhere between these four compass points sits anything and everything. An obscure breed of octopus is brilliant (yet lowbrow). A young Chinese refugee who used a latex mask of an old man as a disguise: despicable (and highbrow). Kanye West’s new album? Brilliant plus despicable.

A typical week’s Matrix might contain a fashion item, some New York gossip and a reference to global politics, alongside some must-see art exhibits and terrible TV. And so it goes on.

Subtitled ‘Our deliberately oversimplified guide to who falls where on our taste hierarchies’, the Matrix first appeared as part of Luke Hayman’s redesign of New York in November 2004. It was suggested by Emily Nussbaum, then an editor at the magazine (she is now an editor-at-large, and a frequent contributor), and it was inspired by a chart in Wired that rated items according to their geek value.

‘I was looking for a light, funny, visual concept to balance out the first thing in the section, which was a serious essay,’ she says today, describing the Matrix as ‘nonsensically authoritative’. She adds: ‘The aim was also to combine the genres usually ‘ghettoised’ into ‘art’, ‘movies’, ‘music’, etc.’ (The actual content of that first Matrix was written by Nussbaum, Adam Sternbergh and Chris Bonanos, overseen by editor Adam Moss.)

The Approval Matrix is situated just after the in-depth What’s On guide, and is the perfect weekly summary for busy urbanites who want to know what the key cultural talking points are, and what they should think about them. Though the placement of items is somewhat tongue-in-cheek, and often positioned to generate amusing juxtapositions of one-line stories, there is a serious point to its serendipity: opera might be labelled despicable; a graphic novel could be highbrow.

A basic grid with everything you need to get through those awkward cocktail party silences (‘I hear the new Daniel Clowes graphic novel is brilliantly highbrow’), the Approval Matrix has now spawned its own imitators, including one on the fashion pages of The Times.

Lowbrow and despicable, highbrow and brilliant, Approval Matrix, we salute you.

Andrew Losowsky is a writer and editor based in the US.