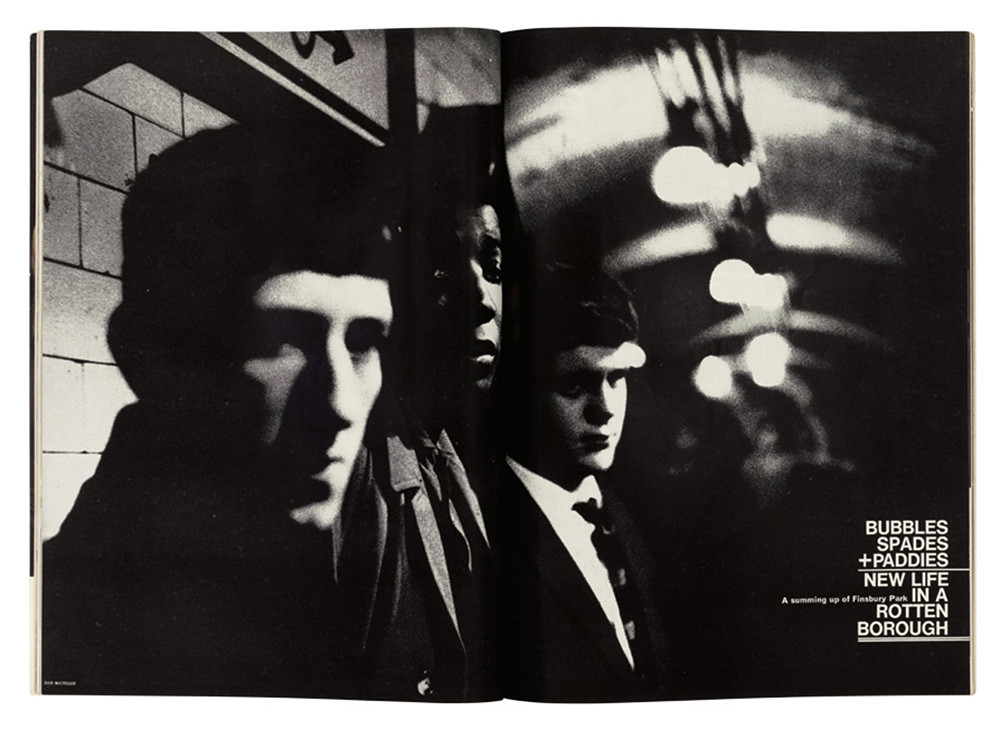 Don McCullin (b. 1935) grew up poor in Finsbury Park, a tough northeast neighbourhood of London. When his father died he was forced to forfeit an art school scholarship.

Called up in 1954 for National Service in the RAF, he served in Egypt, Cyprus and Kenya as a photographic assistant and bought his first camera. Back in London, he photographed his old neighbourhood. After his portrait of the Guv’nors, a local gang in their Sunday suits posed menacingly on a bombed-out building, was published in The Observer in 1959, the enthusiastic response enabled him to turn professional.

A new 35mm SLR camera suited his unerring eye for dynamic composition; a wide-angled lens offered intense relationships with his subjects. The melding of formal beauty and palpable compassion became a hallmark of his visceral work.

Wolsey first encountered McCullin in 1960, at a formative moment for them both. McCullin’s first feature for Town was published soon after. ‘You need disciplining when you are young,’ McCullin has said. ‘Tom shaped my thoughts … he trusted me as a photographer and gave me credibility.’ Wolsey responded by saying, ‘I never directed. People have to learn.’

For more than two decades, McCullin photographed almost every major world conflict, including the raising of the Berlin Wall, Cyprus, the Congo, Biafra, Lebanon, Vietnam, Cambodia and Northern Ireland. He won multiple awards for his harrowing stories and unforgettable single images. He was wounded, captured and threatened. Between 1966-84 McCullin was working with The Sunday Times Magazine, a benchmark for outstanding photojournalism.

McCullin tends to resist easy categorisation as a war photographer. Throughout his career he has also documented humanitarian themes; recently he has shot sublime landscapes in the UK and internationally. He continues to exhibit, publish, and print his work for an archive of more than 5000 prints.

Top: April 1962. Photograph: Don McCullin. This portrait of Finsbury Park immigrants, posed in a pedestrian underground tunnel in McCullin’s home borough, echoes the anxiety of the feature. By processing his film and printing the grainy image himself, McCullin retained control over the intense tonal range of his work – a response to Wolsey’s demand for good, strong, punchy black and white. Wolsey’s ‘cornered’ stack of white type and rules leads elegantly into the next spread.