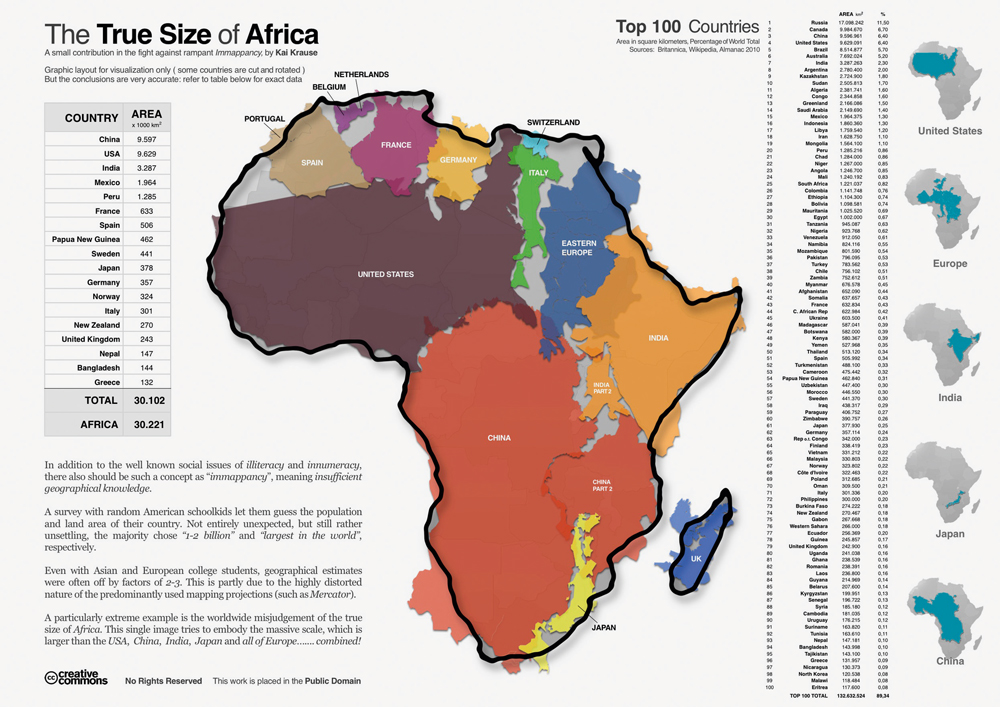 I love this map for one simple reason: it sets the record straight conclusively.

I once asked a multiracial group of twenty Zimbabwean design students which continent they thought was the largest. Twelve said Asia, five suggested Europe, only three named their own. When I showed them Kai Krause’s map they stared in open-mouthed silence.

Krause, a German software and user interface designer best known for founding MetaCreations Corp and Kai’s Power Tools, was moved to create this map as a reaction to what he terms ‘immapancy’ (insufficient geographical knowledge).

His map shatters a lot of misconceptions, which are largely due to older approaches to map-making, notably the Mercator projection – which was created in the sixteenth century solely for nautical navigation purposes, and greatly distorts the land masses. Mercator’s portrayal of Afrika as being smaller than Europe has contributed much to the aforementioned immapancy.

One of my students summed it up beautifully: ‘I’m not surprised by Krause’s map – Afrika has always been referred to in negative terms: “the Dark Continent”, “backward”, “primitive” and so on.’

Is there any more maligned continent in the world? I (and a growing legion of Afrikan intellectuals) prefer to spell Afrika with a ‘k’ because there is no ‘c’ in any Afrikan language, to the chagrin of western editors who ‘correct’ our spelling. This attitude permeates most fields Afrikans find themselves in – our work is always greeted with scepticism and undergoes a scrutiny not extended to others.

Krause’s map illustrates how persuasive information can be when presented in a stunning graphic and visual manner. I have always argued that countries like mine would benefit immensely from information design, especially in the battle against HIV / aids. There is no need for explanation. Information design could stop the scourge dead in its tracks.

Saki Mafundikwa is a writer and film-maker based in Zimbabwe.