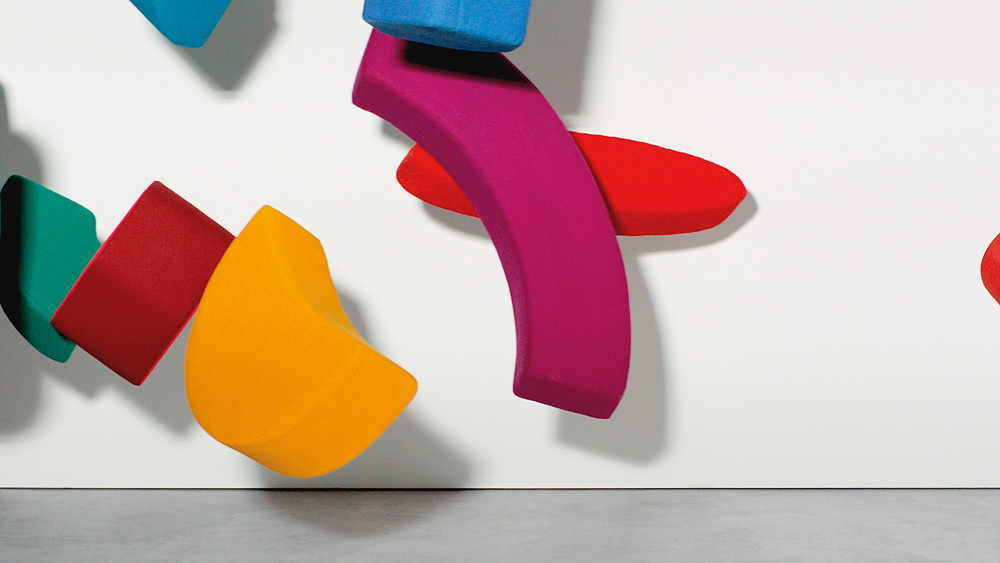 In a cavernous sound stage at Pinewood Studios, a little band of grown-ups are busy picking up giant, cloth-covered play shapes and passing them to a man atop a stepladder who bundles them into a big wooden box. Once the box is filled, an electronic winch lifts it up to the ceiling.

We’re here for a high-speed photography session, a motion picture ‘still life’ for the fabric manufacturer Kvadrat, whose range of upholstery – in all its different colours and textures – is displayed on the shapes. 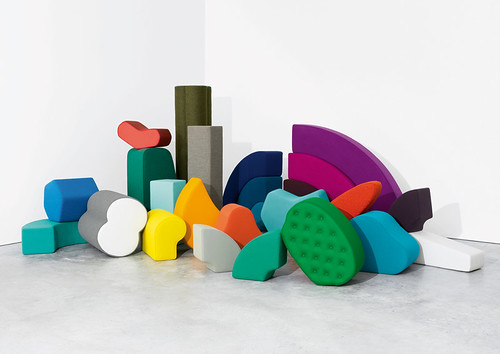 Someone shouts, ‘Watch your eyes,’ and blinding light illuminates the backdrop. An electronic catch releases the trapdoor at the bottom of the box, and the heavy, colourful shapes tumble to the floor.

It’s over in four and a half seconds – and we hardly saw a thing – but photographer Matthew Donaldson rushes to a monitor to see what he’s captured at 1000 frames per second. What emerges, slowed down to 25fps, is an aerial ballet of upholstery as Jason Berman (of Love High Speed), operates the playback.

The slow-moving tableau (like applied Bill Viola) is the logical, new-media extension to a campaign devised by designers Graphic Thought Facility (GTF). They wanted to show the client’s fabrics neither on rolls of cloth nor on items of furniture, so they commissioned a series of shapes, each of which was upholstered in a different material.

GTF’s Andy Stevens art-directed the original still life photo session at Donaldson’s studio, where they arranged the shapes on the concrete floor. Now Stevens has had to bundle them all into a hired van and bring them to Pinewood for the day so that they can add the dimension of time – Donaldson’s place isn’t tall enough. The canvas backdrop is a photographic reproduction of the original scuffed studio floor, and the massive 99kw lighting rig is there to replicate the flash used for the stills photography.

Donaldson has been working with moving images for a while, as a logical extension of his studio practice, which includes portraiture and travel as well as still life. ‘It’s very hard for us as stills photographers to move into moving image because suddenly there’s a narrative in front of you.’ He relishes the use of high speed photography as ‘a chance to see things you wouldn’t otherwise see … it’s almost like one of those exploded view diagrams you see as a kid.’

His portrait of Nacho Figueras for Nowness.com shows the polo player riding a favourite horse in slo-mo, again with Berman’s camera. ‘There’s a moment of inertia when everything is stopped and the horse comes round and you see it accelerate and you see the rider being left behind and then his reactions.’

Above: ‘Throwing Shapes’ for Kvadrat, directed by Matthew Donaldson.

But such work may depend upon the way new media develops. ‘When the era of the iPad really starts, you’ll be reading your New York Times Magazine and there will be an ad for Rolex or whatever and it will move – there’ll just be a little bit of that world,’ says Donaldson. But he thinks it would be a mistake for the single shot to turn into a complete moving commercial. ‘I’m here to photograph a glass of whisky … and sometimes I wish I could just make it move a little bit, but I don’t want to direct Arnold Schwarzenegger! That’s not why we read newspapers or magazines.’

On Berman’s monitor we can see the fruits of the day’s labours, as the objects float gracefully from left to right and back again, and Donaldson and Stevens select the best takes. ‘I know what I want it to look like,’ says Donaldson. ‘How do I get there? … You’re not controlling it – you’re working your luck.’