… there was a Big Bad President. How satirists use children’s tales to puncture the huffing and puffing of politicians 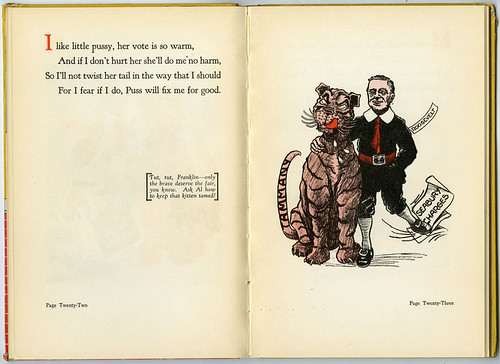 On Lil’ Bush: Resident of the United States, on the Comedy Central cable channel, George W. and his cronies are reduced to pint-size animated caricatures who, like unruly children, wreak havoc on the nation. In one episode, noting that ‘American awesomeness’ has plummeted and ‘we are now the most hated nation in the world’, Lil’ Condi Rice introduces a plan to re-brand the entire country as ‘The Land of the Funsies’ and replace the ‘scary old bald eagle’ with ‘a funny wisecracking unicorn’ called ‘Larry the Fun American’.

Sound silly? You bet, but it also derives from a venerable tradition of satire dating back to the nineteenth century, when kings, queens, prelates and presidents were transposed onto characters from children’s literature for the sole purpose of ridicule. Classic children’s tales with characters that reflect the comédie humaine are perfectly suited for parody. With just a twist of wit and irony, the Brothers Grimm, Mother Goose and even Dick and Jane provide ready-made vehicles to attack the foibles and follies of any leader or political entity.

One of the most admired of this genre is a 1941 British parody of Struwwelpeter (Shockheaded Peter), the German fable about a nasty and unkempt little boy whose misbehaviour has disastrous consequences. In Struwwelhitler, written and illustrated by Robert and Philip Spence, Hitler and his henchmen are thwarted at every turn, or punished for carrying out their evil deeds. And when not being thwarted or punished, they are ridiculed, as this rhyme vividly illustrates:

Just look at him! There he stands

With his nasty hair and hands.

From each dirty fingertip:

And the sloven, I declare,

Never once has combed his hair;

Piecrust never could be brittler

Than the word of Adolf Hitler.

Infantilising those in power does not rely on parodying specific characters: sometimes it is enough to place the target in a children’s context. In the Italian Mi Chiamo Adolf (Giannino Stoppani Edizioni, 1995), written and illustrated by Pef, Hitler is portrayed as a creepy child (complete with moustache) who dreams of nightmarish acts of cruelty and pays the moral price. While not always the most effective satire, it is nonetheless an unsettling portrayal.

Cover of Struwwelhitler. Robert and Philip Spence were ‘Doktor Schrecklichkeit’ (the name comes from the Nazi Campaign of terror in occupied Europe).
Top: Roosevelt is portrayed as a schoolboy befriending the mean Tammany Tiger - the Democratic political machine in New York, from A Political Mother Goose. 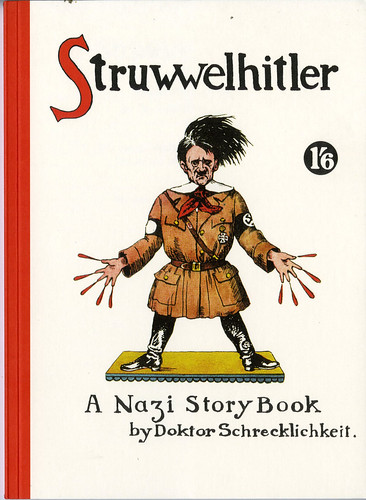 In the United States one of the best received send-ups of 1931, just after the start of the Great Depression, was A Political Mother Goose by Paul Johnson (The Non-Partisan Press). Here, as in Struwwelhitler, rhyme is expertly crafted to bring out the venal sensibilities in politicians of both Republican and Democratic parties. A good example is the verse that accompanies an illustration of future Democratic president Franklin Delano Roosevelt walking with his arm around a corrupt Tammany Tiger (Tammany was the powerful New York City Democratic political machine):

I like little pussy, her vote is so warm,

And if I don’t hurt her she’ll do me no harm,

For I fear if I do, Puss will fix me for good.

Many caricaturists have used children’s characters to great effect, though few in recent memory with sharper wit than Robert Grossman. In his Snow White strip (published in New York Magazine, 1973), President Richard Nixon, then under investigation by the Senate Watergate Committee, happily dreams of himself as Snow White with Congressional elves at her beck and call. But when the elves turn nasty and disrobe her, the president awakes in a panic, exclaiming, ‘Oh my!’ The strip continued for many weeks, following the president’s protestations of innocence with great glee. More than a third of a century later, Grossman is still stabbing at power and the powerful, with strips pitting the ‘superhero’ O-man against Flyboy McPlane in the battle for the White House.

The most pitch-perfect of current political parodies is Goodnight Bush by Erich Origen and Gan Golan (Little, Brown, 2008), based on Margaret Wise Brown’s classic, Goodnight Moon. For any parody to live up to its promise, every nuance of the original must be precisely copied, here in the flat colour drawings of George W. in bed in his ‘situation room’ – with the presidential red phone by one bed-stand and lines of cocaine on another – and the black and white details that were a key conceit of the original. The text superbly follows the singsong cadence of Wise’s version, as in:

And the flight costume

And goodnight balance of powers.

‘Where is Dad?’ asks George.

He holds out a flag.

‘He does not want that flag, George,’ says Bar.

‘If he did he would have gotten one himself.’

But I will put it in the den with all the other chazerai [garbage].’

The pièce de résistance of Bush-era parody is, however, not a send-up of a specific book but rather of a particular genre of biography for juveniles: Young Dick Cheney: Great American by Bruce Kluger and David Slavin (AlterNet Books, 2008). The rather lengthy text, punctuated by Tim Foley’s smart line drawings of a pudgy young vice-president, includes his first encounter with oil: ‘a small, sparkling black puddle, creating the most beautiful rainbow Young Dick had ever seen. He was drawn to it, like a kitten to a dish of really dark milk.’ It ends with his rigging of the ballot for his high school pageant:

‘After reviewing the votes,’ Dick told the committee, casually setting fire to the pageant ballots and tossing them into a small wastebasket, ‘I regret to inform you of a voting irregularity. It appears that art student Chad Broward’s unique “horsefly ballot” confused many students, and now we have, uh ... a three-way tie for the winner.’

Though ham-fisted at times, the humour is a tonic for those who have endured Bush-Cheney for eight years. Parody may never actually change the political world, but it does provide a welcome vent for frustration. Using children’s images and stories also makes the critiques more accessible and, in a curious way, more human.