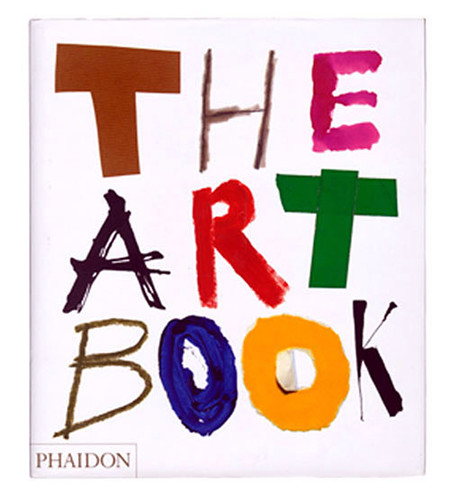 Above: The Art Book, 1994. Cover and book design by Alan Fletcher.

The first time I met Alan Fletcher was in the early 1970s. I was just nineteen or twenty. I had started an electronics company and needed a logo. I had no idea where to go so a friend, Tony Kaye (later famous in the worlds of advertising and film) suggested I should see Pentagram. I met Alan who said ‘I can do a logo for you,’ but when he told me how much it would cost I was blown away! It was more money than I possessed at that time. So he kindly introduced me to someone else and the logo was designed elsewhere. Our paths would not cross again for twenty years.

When I acquired Phaidon Press, at the end of 1990, though I had an eye for design, I didn’t know much about it formally. But it was clear to me that Phaidon’s books didn’t look as good as some of its rivals. So I interviewed several top designers, including Pentagram’s John McConnell. John was involved with Faber so he suggested that I meet his partner David Hillman, who soon started working for us, commissioning book designs from a whole range of designers, including Alan.

In those early days of the ‘new’ Phaidon, David’s contribution was considerable but, for reasons I am still uncertain of, he soon decided to leave. John suggested I meet Alan who, at that time was just about to retire from Pentagram in order to concentrate on his personal work and a more select range of clients, so that he could focus on the type of work he really enjoyed. I knew that Alan was a hero to many people and thought that this might be an opportunity for us.

Alan’s first days at Phaidon were a complete culture shock. In the past, when I had needed a new book concept, David would just deal with it and present a new proposal a few days later. Alan’s approach was quite different. He would ask: ‘Why are we doing this book?’ ‘What’s it about?’ ‘What’s the point of it?’ You couldn’t get a concept out of him without him asking a million questions. Weeks could go by. I soon realised that Alan’s major concern was communication, and he could not act until he fully understood all the editorial aspects. He was a true editorial designer – concerned with ideas, content and communication.

The germ of the idea for The Art Book emerged thanks to a typically simple Alan idea: ‘Why don’t you use the material from the archive and package up an A-Z with a single page for each artist?’ Together we developed this and ended up with 500 artists, a definitive work for each and an extraordinarily low price point. It was a great success and it is still one of our best-selling titles. The jacket design was 100 per cent Alan; it was brilliant because it pulled in so many people who might otherwise have been put off.

He was a graphic artist, of the type that hardly exists any longer. He had his own language, which incorporated handwriting, cutting things up, and found objects and collage. That was where he really came into his own. I don’t know anyone who can give you a hand-crafted cover of the sort that Alan could produce. It looks easy to just cut up a few letters and lay them out, as he did for The Art Book, but actually it is very hard; some of the publishers that we licensed to publish foreign editions of The Art Book attempted to copy Alan’s style for their own language editions. These were, without exception, a disaster – their designers were incapable of imitating Alan.

One of the things David Hillman had mentioned to me was that Alan had been working on a book for years, but in David’s view he might never finish it. When Alan first showed me the material I knew it was highly original and completely fresh. I also knew that, if handled correctly, it could be widely popular and transcend the design community. I encouraged Alan to finish it, and several years later The Art of Looking Sideways appeared. It turned out to be enormously successful, and brought Alan’s spirit to a very wide public. I am certain that the book will go on selling for many years and is a marvellous lasting testimony to this unique creative force.

Spirit of generosity
As far as his own work was concerned, Alan was a perfectionist. The most recent book he finished for us was his own Picturing and Poeting. He was adjusting the position of the barcode two or three days before he died.
Alan was a highly original thinker with an unusual thought process. He overflowed with ideas. If you listened to ten of them, five or six would be of no use, somehow missing the point, three or four would be extremely good, and one would be sheer genius that could only have come from Alan. He was one of the few people I have encountered who had the ability to make me look at things in a completely different way, even though I was fairly certain of the answer. He could turn your mind 180 degrees. Alan was also a catalyst. He could say something to set you thinking on the right path.

Alan was never strong about ownership; he liked younger designers to flourish. Now and again he could be gruff, but he never alienated anyone, even though he may have had to tell them that what they were doing wasn’t making the mark. He always had a very generous spirit. He cared about the design community at large and was concerned that it was thriving.

How do we fill the void? Obviously there are countless good graphic designers, even some great ones, but there is no other Alan, or anyone like him. For us, he is irreplaceable.