A modest dictionary of print terms has been a source of inspiration for 60 years. 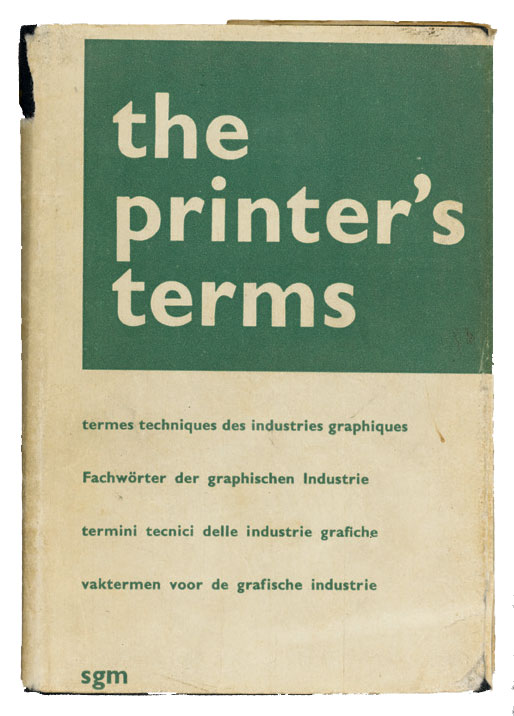 The Printer’s Terms is an illustrated dictionary of typography and printing specification. First published in 1949, the modest appearance of this compact volume belies the scope of its content and the scale of the editing and design achievements of its Swiss author and designer, Rudolf Hostettler.

Pocket-sized (15 x 10cm) and originally just over 200 pages, the book comprised three sections: a preface describing how to use the book; a picture section in three languages (English, French and German) that sets out some 250 annotated visual explanations relating to composition, reproduction, press work, paper, bookbinding and comparative measurement tables; and a five-language index (as previously, with Italian and Dutch) of some 1200 technical terms. Instructive in approach, the book offered both translation and explanation of listed terms – the provision of a visual aide-mémoire was designed to aid comprehension and memorisation, and in so doing, reduce the margins for error in practice.

Changing terminologies were then a common concern in much trade literature and the origins of the information-gathering for The Printer’s Terms seem clear in Hostettler’s work for the long-established monthly magazine Schweizer Graphische Mitteilungen (SGM). It was as an SGM book that The Printer’s Terms was initially published and printed by the Swiss printer Zollikofer. Yet, what Hostettler proposed in The Printer’s Terms is immediately distinguishable from the existing material available as it redefined both the scope of a technical typographical vocabulary, and the systematic and visual emphasis of its presentation.

Hostettler was an eminent and expert typographer practising at a time of heated typographical debate. And while associated more with a classical style than with the new visual voice of Swiss Modernism, his sympathies to both are clear in the restrained yet incisive arrangement of The Printer’s Terms. 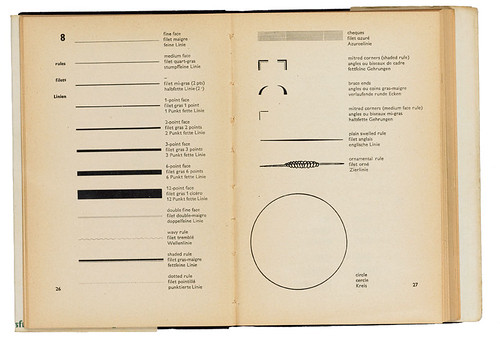 His representations of practice established a precedent for typographic description and illustration for years to come. And, as Richard Hollis notes in his book Swiss Graphic Design, the ‘practical elegance of its typography, in varying weights of Gill type, illustrated with line drawings and photographs, helped confirm Switzerland’s reputation for precision and clarity in dealing with technical information.’

Though the book provided a tool for translators and editors, Hostettler’s distillation of ‘trade’ knowledge into a simple, accessible volume facilitated circulation of its technical content to new audiences, including those beyond Switzerland. The clarity of explanation appealed especially to teachers, including Anthony Froshaug in London. There the book became an invaluable tool for print specification in the still nascent discipline of graphic design. Inspired himself as a student by The Printer’s Terms, Ken Garland would later marry further the pragmatics of print production with the ideas of the design studio in his Graphics Handbook of 1966.

For Hostettler, revision of The Printer’s Terms became a central preoccupation. Over 30 years he ordered nearly 12,000 A5 index cards of terms in preparation for the many revised and expanded editions of the book he produced until his death in 1981.

Copies are now much treasured. The content may be dated but the object quality of the book remains. Perhaps ironically, there is still plenty to inspire in a book so pleasing in execution yet un-iconic in ambition.