Unity and justice and …

Jason Grant, of Brisbane’s Inkahoots, explains why he brought his New Anthems project to Berlin to collaborate with Anja Lutz’s A–Z gallery and the Buchstabenmuseum 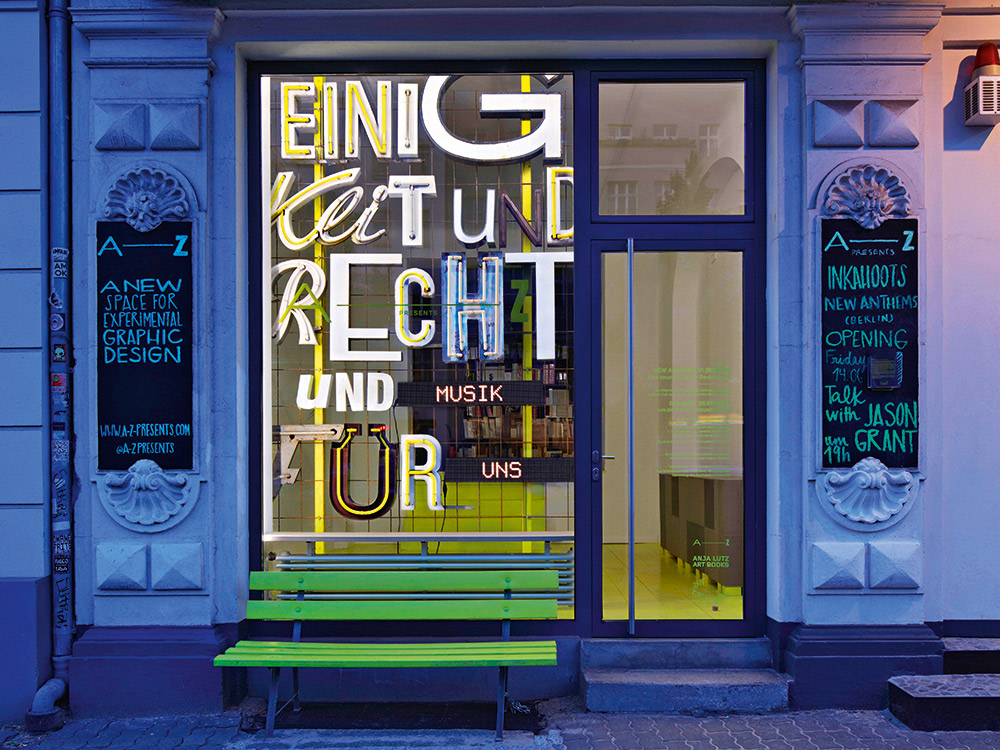 The last time Germany insisted its national identity was fixed and pure, it did not end well. National identity mutates into the grotesque ideology of nationalism while waiting to be uncovered or rediscovered.

New Anthems is a series of installations that my studio Inkahoots (see Eye 47) devised to affirm national identity as dynamic and constructed, rather than fixed and natural. We are based in Brisbane in Australia. To make the latest version of New Anthems, we travelled halfway round the world to Anja Lutz’s A–Z gallery in Torstrasse, Berlin. 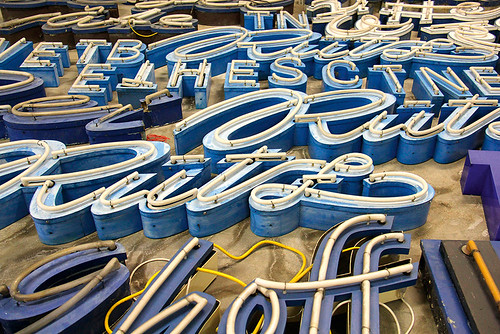 With the growing global resurgence of ultra-nationalism, social, cultural and religious stereotypes and symbols are being used to exclude and divide. Today in Germany, the successful postwar rejection of the radical right is in danger of being undermined by electoral gains of the anti-European Union, anti-immigrant, anti-Muslim Alternative für Deutschland, the serious violence of the Chemnitz riots, and now the Neo-Nazi murder of CDU politician Walter Lübcke.

In May this year Bodo Ramelow, an eastern German state premier, called for a new national anthem to reflect current values and embrace both sides of the two former Germanys, post-reunification.

This solemn task has been undertaken by an unlikely three-way collaboration: ourselves, a design studio from another hemisphere; A–Z; and Berlin’s Buchstabenmuseum, ‘the first museum in the world to collect letterforms from public spaces and display them as part of urban history’.

New Anthems I quotes the opening line from Australia’s official national anthem rendered in neon with internet-connected LED signs, at the Judith Wright Centre for Contemporary Arts in Brisbane, 2009. Photograph by Stefan Jannides. 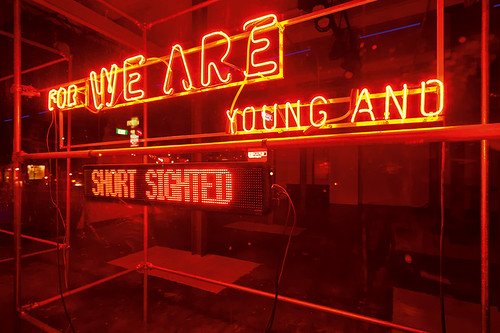 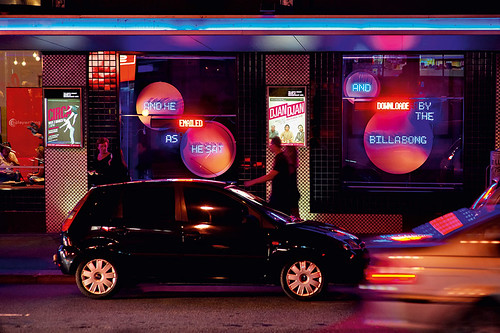 New Anthems IV presents a lyric from the Midnight Oil song ‘Beds are Burning’ and was commissioned for the Ideas Festival, at the State Library of Queensland in Brisbane, 2011. Photograph by Stefan Jannides. 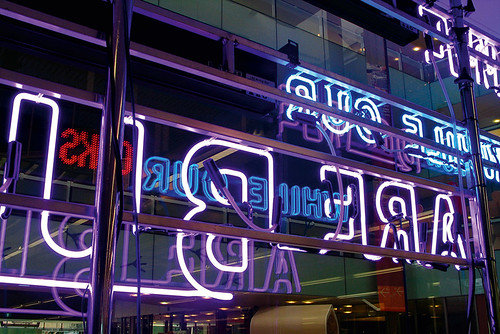 The A–Z gallery is a rare home for graphic design misfits. Lutz has built a project and exhibition space with a mission of ‘expanding the territory of graphic design by rethinking its limits … ranging from print, digital media, installation, performance, film, and a variety of other media and formats.’ With A–Z, Lutz is in some ways circling back from her publishing and book design practice to her earlier experimental magazine Shift!, (see Eye 37), an open platform for exploring a wide variety of people, ideas and formats. 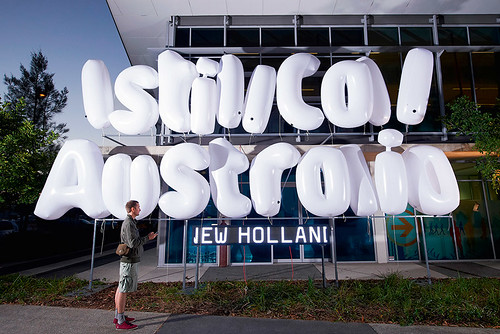 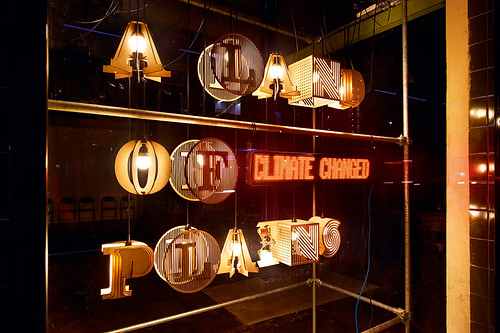 We followed Tinnes. For past versions of New Anthems we have made custom-designed sculptural typography using neon, fibre optics, recycled cardboard and timber, even giant helium-filled letter balloons. This time, our installation used historic letters from East and West Berlin borrowed from Berlin’s Buchstabenmuseum (the Museum of Letters). Working with these objects was a great experience for a typographer, especially since most work with letterforms these days is just pushing pixels and pulling vectors. Touching, and even smelling and hearing these letters, with their grime from the street, rust from the weather and individual material resonances should be prescribed practice for seasoned screen-bound designers.

And if a designer can fit a bootful of interlocked, fragile historical letters in the back of a small car and transport them across Berlin without damage, then they can kern anything!

The arch of the museum with letters packed and sorted by colour. Photograph: Alexander Steffen, vanishingberlin. 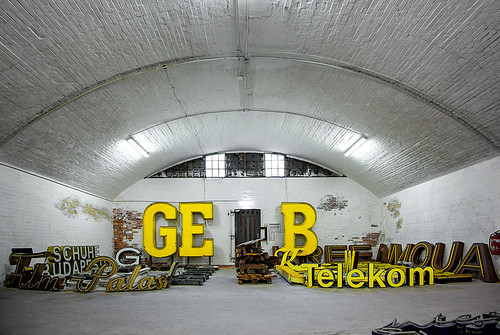 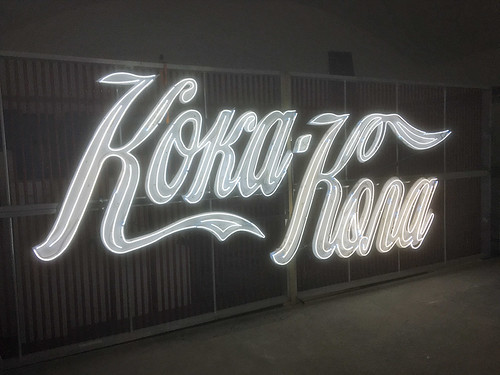 The words ‘Freiheit’ (Freedom) and ‘das deutsche Vaterland’ (For the German fatherland) are omitted and replaced with LED screens enabling participants to input their own words via SMS, and rewrite the text. A website enables real-time listing and archiving of all displayed contributions.

The ‘EI’ (‘egg’ in German) letters are from a SEIKO sign once installed at the Berlin Bahnhof Zoo. 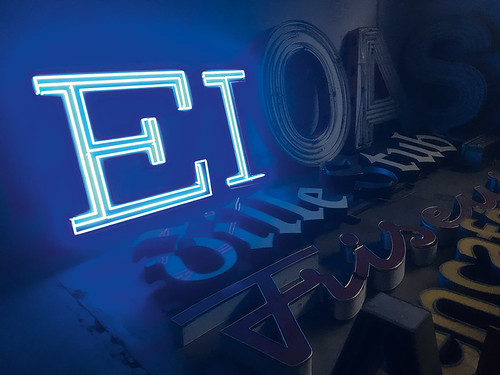 Letters from the former West Berlin, including ‘K’ and ‘tt’ from ‘Korsett Engelke’ (a corset shop), share the floor with letters from the GDR, including the orange-yellow ‘R’ from a ‘Sporthalle’ (sports hall) in Coburg. Photograph: Inkahoots. 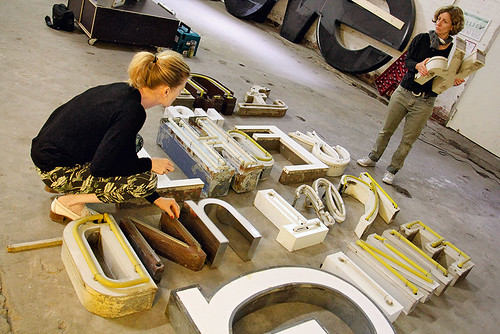 And maybe one day, as someone texted, we can even have Einigkeit und Recht und eine bessere Hymne für Deutschland (Unity and justice and A BETTER ANTHEM for GERMANY).

For future versions, we will continue to collaborate around the world with letters and code to promote creative participation from diverse communities as a democratic imperative. New Anthems is a little project with the big idea of accepting and reinforcing the complexity and pluralism of contemporary cultural life. It lives as an adaptive ongoing platform for the urgent international critique of resurgent nationalism and xenophobia. 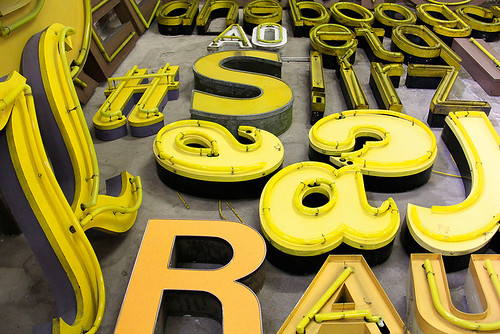