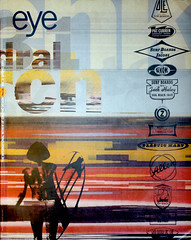 Editorial Eye 16
Rick Poynor
Is the education that graphic designers receive adequate to meet the changing role of the…
Why we should talk to our neighbours
Design education, Graphic design, Michèle-Anne Dauppe
Design education faces some important decisions. To what extent should it be about the study of the subject as well as its practice?
Critical spirit of a telephone book
Monitor, Robin Kinross
The all-lowercase Dutch phone book has yielded to the ‘Modern Traditionalism’ of Martin Majoor