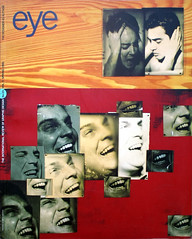 Go in at the top and redefine the project
Monitor, Nico Macdonald
What is the graphic designer’s role in production for the internet and how are studios changing?
Editorial Eye 20
Editorial, Rick Poynor
Since the beginning of graphic design there have been graphic authors. Jan Tschichold, whose 192…

Reputations: Tibor Kalman
Moira Cullen
Moira Cullen interviews Tibor Kalman
Gastrotypographicalassemblage
Lou Dorfsman’s mural for CBS’s cafeteria brought expressive typography to enviromental scale
Dreams that money can buy
The seamless fantasies devised by designers play a crucial role in the process of selling fashion
Form follows attitude
Ursula Held
Lars Muller’s dissatisfaction with design’s service role led him to set up his own publishing house
The designer as author
Michael Rock
Graphic authorship is taken for granted by many design theorists and it is gaining ground within practice, too. But the idea has received little sustained examination. What does it mean and what is really possible?
Darkness visible
Steven Heller
Amy Guip reconciles commercial image-making with a need to explore more personal themes
Remove specifics and convert to ambiguities
Rick Poynor
As designer, writer and educator, Jeffery Keedy is a committed proponent of postmodernism
Concrete poems just are
Peter Mayer
Concrete poetry never won full acceptance, despite the efforts of exponents all over the world. In the digital era its innovations are ripe for reassessment