Billions of miles from Earth and still travelling, this etched metal plaque is the furthest piece of design from our planet. Appreciated by Gary Benzel and Todd St. John of HunterGatherer 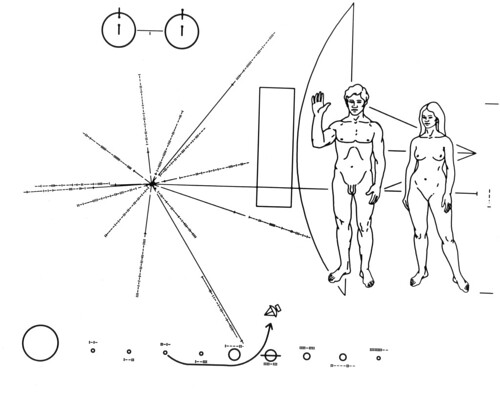 This image is etched into a six by nine inch metal plaque bolted to the Pioneer 10 spacecraft, which was launched in 1972 to explore the Solar System and beyond. Possibly the most ambitious piece of visual communication ever produced, it is designed to communicate what we are and where we are to the broadest target audience imaginable: any conceivable life form or mechanical intelligence, anywhere in the universe, at any time in the foreseeable future. Now located 7.4 billion miles from Earth and still travelling, it is also the furthest piece of design (made by humans, at least) from our planet. The plaque shows two figures in relation to the size of the spacecraft, a molecular diagram of hydrogen (presumed to work as a universal yardstick for time and distance) and Earth’s place in the Solar System and galaxy. While the design aspires to be representative and concise, there are some problems. Sagan originally claimed the figures were a visually averaged hybrid of all humanity, yet they look strikingly similar to European depictions of Adam and Eve.