Neither deco nor rational

Ben Archer
Letter to the editor

I have some comments with regard to the The Artcity 2005 poster El Otro Lado by Denise Gonzales Crisp and ‘The decriminalisation of ornament: the decorational’, by Alice Twemlow (Eye no. 58 vol. 15, pp.30-31).

Denise Gonzales Crisp’s poster is neither decorative nor rational in the true sense of either term, and the justifications offered in Alice Twemlow’s text illustrate just how far off-topic this project is. The poster is a bad piece of work exhibiting the kind of conceptual and mechanical flaws usually found in student work rather than on the pages of Eye.

I disagree with Gonzales Crisp’s observation (as reported by Twemlow) that ‘vector-based technology is key to contemporary pattern making’ and would argue that (contemporary) pattern making per se is inherent in any grid or pixel-based technology instead, just as it was with 1985’s MacPaint, in the Jacquard textile industry, and all the way back through human history.

As for thinking that ‘they probably intended step-and-repeat to be used for charts, a kind of work flow idea’ – any printer or prepress house should be able to tell Denise Gonzales Crisp that step-and-repeat is all about maximizing sheet yield on a press, an entirely rational (but not intentionally decorative) endeavour.

Some of us, as graphic designers, never lost ‘that connection to the making’ that Gonzales Crisp claims, and this serves to remind us how alienated she must be from the processes outside academe. If she bothered to read any histories of art and design, she would realise the fallacy of her arguments; traditional designs for ornamental decoration have always been metonymic. If Denise Gonzales Crisp is serious about the nexus of crafts-based complexity in contemporary decoration, she would do well to read The Grammar of Ornament by Owen Jones (Omega Books, 1986) which has recently been republished, and The Language of Pattern by Keith Albarn, Jenny Miall Smith, Stanford Steele and Dinah Walker (Thames and Hudson, 1974). She might learn something to her advantage. 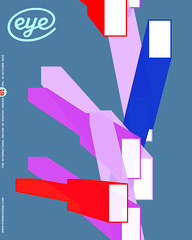