Are installations the new billboards? Or the twinkling face of corporate propaganda? Critique by Rick Poynor In Richard Hollis’s new book about Swiss graphic design (see Reviews, pp.78-85), he describes the moment, in 1958, when he arrived in Zurich’s main railway station. Above the platforms, he was excited to see a long billboard advertising cigarettes, an example of the Swiss typographic style. Black-and-white photographs of smokers’ faces in dramatic close-up alternated with panels bearing the brand name, Turmac. The rest of the copy was set in a plain sans serif. In the picture Hollis shows of the ad, designed by Josef Müller-Brockmann, a three-dimensional cigarette pack projects from the billboard above the passengers.

A few days after seeing this image, I happened to be in Zurich myself. On the journey home, I caught the train from the central station to the airport and, on arrival, ascended the escalator that takes you to the departure desks up above, by way of a shopping centre. Halfway up, I was confronted by a huge billboard for Orange much like the one Hollis had seen nearly 50 years before in Zurich. Fifty metres long, it dominates the concourse and curves round like a hook at one end to entrap the viewer.

The Orange campaign makes similar use of faces in close-up. The photographs show people in a desert, with distant mountains and bright skies piled with fluffy clouds. A young woman admires a feather in her hand, a girl extends her arms as though borne aloft by the desert wind and someone else is flying a kite. The people are adventurers, explorers of their own potential, their faces filled with delight and wonder. They look arty and sensitive and glow with self-satisfaction. Between the stretches of printed advertising, a video screen shows similar images. Beautiful people leap around on the salt flats. A man reaches for light reflected in a pool, picks it up tenderly and hands it to a woman.

All: Orange's 700m2 advertising installation at Zurich Airport features an 'Orange Lightscape' containing 475 individual LEDs. The project was developed and realised by Orange with GCGroup, which speacialises in three-dimensional communication. 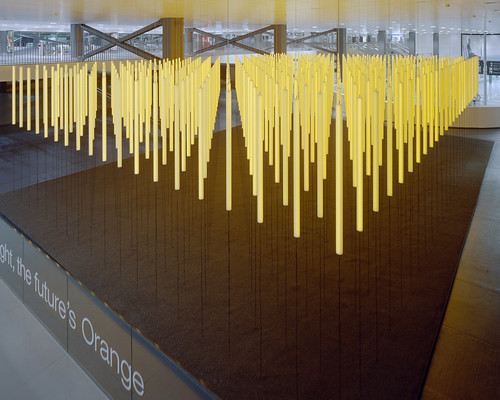 In typographic terms, nothing significant has changed since the 1950s. The lowercase Orange logo set in an orange box is ‘Swiss’ to the core – no different in essence from the Swiss International Air Lines logo in a red box. The logos in the ads take the form of orange lightboxes. Sans serif words composed of dots of orange light play across the images: ‘explore, listen, discover, share, enjoy, smile, communicate, relax’ . . . ‘Do you speak Orange?’ . . . and the inevitable ‘The future’s bright, the future’s Orange’. This is the kind of advertising that aspires to be a full-blown multimedia ‘experience’ and suspended light tubes glow, fade and flash with the brand colour. A legend in several languages says, ‘Welcome to an open, transparent and innovative world.’

In the 1950s billboard men and women smile with satisfaction as they hold or smoke the cigarettes. There is no symbolism: the ad says simply that consuming the product will give you pleasure. The Orange ads, by contrast, are entirely symbolic in content, attempting to evoke the boundless freedom and possibilities of the mobile phone network. (One panel does, however, show pictures of the Nokia N70 and point you to a nearby Orange shop.) At root, though, while Orange’s imagery is more elaborate, it makes the same basic claim for the transformational powers of the offer. In each case, the remarkably similar typographic aesthetic adds to the feeling of sophistication, but this aspect of the ads, though seductive for designers, is a red herring. The most significant thing about them is the way they seek to impose their own master narrative on public space. In that sense, the Orange installation, which is claimed to be the largest piece of three-dimensional advertising in Switzerland, really is in a direct line of descent from Müller-Brockmann’s typographically austere paean to the benefits of cigarette smoking. 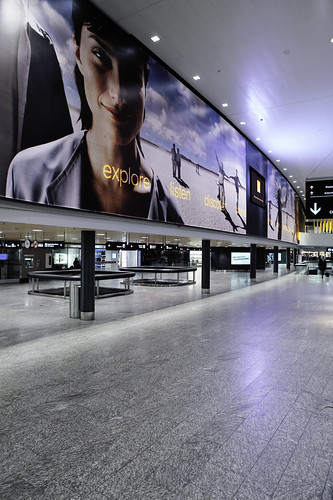 It is strange how inured we have become to this kind of commercial intrusion. Watching people walking around under the huge Orange advertising project, I was struck by how little overt attention anyone pays to it, though maybe it exerts its influence ambiently, as reinforcement of an established brand presence – ‘Oh, there’s Orange again’ – rather than as an object of contemplation. In terms of uncritically expressing the party line, are the lifestyle accessory-entranced models really so different, we might ask, from the positive, beaming faces seen in old Chinese Communist propaganda posters, which irony-conscious westerners love to savour? If it were not for the fact there is little of real graphic interest in these ads, one might be inclined to predict that this kind of advertising imagery will one day be contemplated with amusement as the kitsch of its time.