The future is ours to see 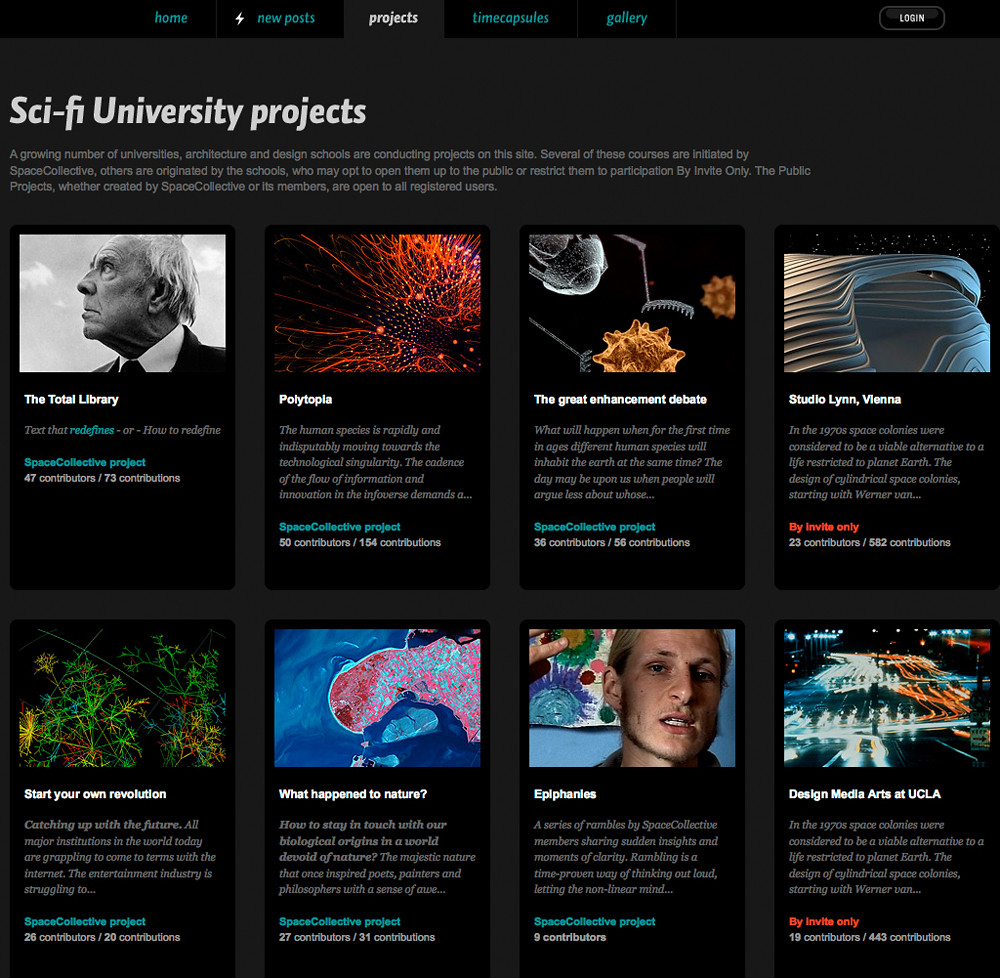 Do we believe in the future? Climate catastrophe now seems inevitable, while global economic meltdown was only narrowly averted, with few lessons learned and no guarantee that the system won’t fail again. For entertainment, Hollywood regularly lifts our spirits with CGI spectacles of planetary disaster – only two years to go until 2012! The Road, Cormac McCarthy’s grim prophecy of life, or the improbability of life, after the apocalypse, is an unnerving read and the film brings the happy tidings to a new audience.

The mood of global unease makes the optimism of the SpaceCollective website all the more intriguing, perhaps even therapeutic. Its founders, interactive designer Folkert Gorter and film-maker Rene Daalder, believe that the future dreamed of by science fiction writers has arrived and is a place of boundless possibility for new ways of living.

Staffed, curated and written by self-styled ‘forward thinking terrestrials’, spacecollective.org went public at the end of 2007 and it has grown into a labyrinthine collective endeavour. ‘The human species is rapidly and indisputably moving towards the technological singularity,’ riffs the intro to one of their projects. ‘As hyperconnectivity increases, our minds are becoming progressively more coupled and cybernetically joined.’

I confess to having an allergy to this kind of talk ever since Wired editor Kevin Kelly started cheerleading for the emergence of an electronic ‘hive mind’ in the 1990s. California, where Gorter and Daalder are located, is the international HQ of messianic, cast-off-the-body techno-utopianism, alongside every other kind of incorrigible cult craziness. Anyone visiting SpaceCollective should avoid starting with the ‘Epiphanies’, a series of short personal videos at the bottom of the first screen. Gushing enthusiasm for all things Webby and interconnected makes some of the speakers sound credulous and naïve.

Collection of images and quotations from the Gallery.
Top: SpaceCollective’s home screen, with short films by Rene Daalder at the top. 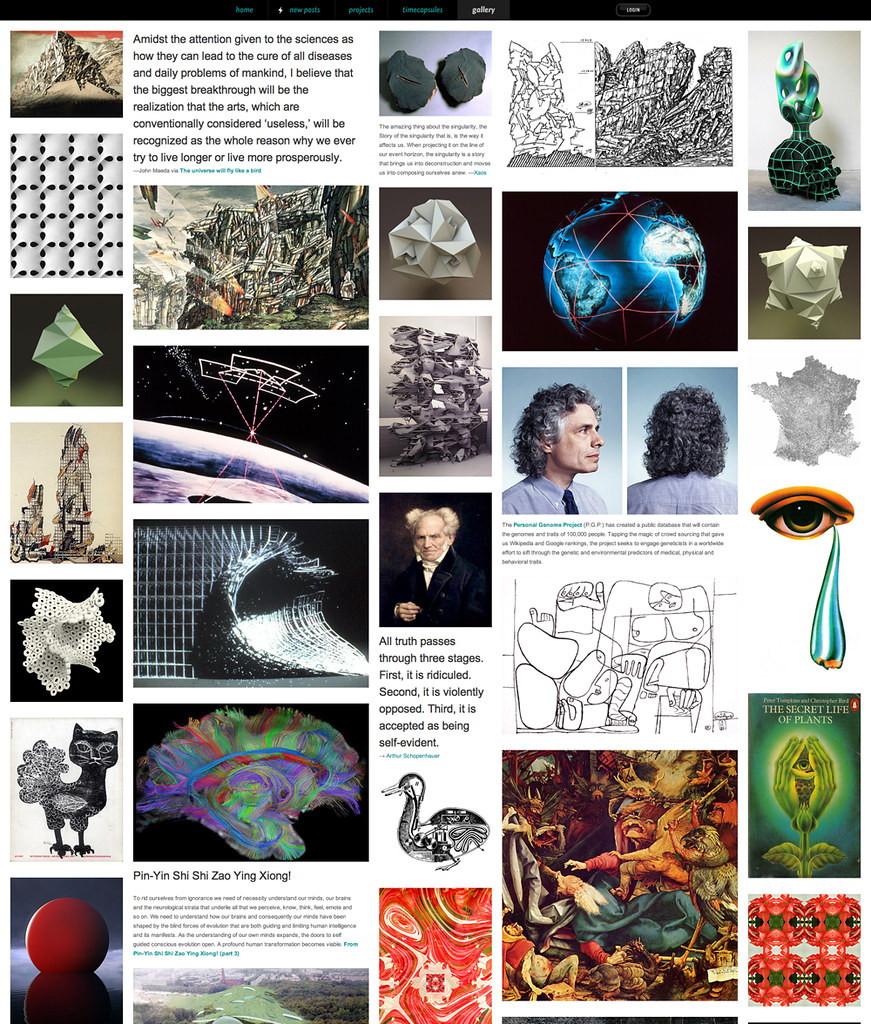 The best of the writing, though, is another matter. While the internet’s limitless potential and intoxicating excitement is never in question for this predominantly youthful crowd, the sharpest contributors develop their themes – new kinds of human, branding the species, the future of nature – with an energetic command of the issues at stake that is undeniably persuasive. Daalder, now in his mid-60s, is a wise, readable and judicious host, and contributors such as meganmay, Spaceweaver and the super-productive Wildcat, with 140 entries, have committed sizeable bodies of commentary to the site. Design educator Rebeca Méndez and her design and media arts students at ucla took part in a speculative project about space colonies (we might need them soon enough).

SpaceCollective’s design is one of the best things about it, an innovative and durable framework that avoids resorting to routine, page-like boundary markers and makes use of the full screen, while still maintaining a lucid, hierarchical structure. All the information is organised using boxes with round corners, like playing cards, which present a title, a picture and a brief introductory text. Select, for instance, ‘Polytopia’ in the ‘Sci-fi University projects’ section and a similarly styled screen of card-like entries appears. Select Wildcat’s recent ‘A Cyber Soaring Humanity’ essay and the other cards, which still remain on screen, open up to make room for the complete text plus visitors’ comments. Clicking on a new card closes the previous one. The feeling, as you navigate through SpaceCollective, is of an environment that is visually complex, dense with ideas, yet at the same time open, legible, mobile and elastic. You are moving smoothly within a matrix of possibilities that allows you to remain constantly oriented in relation to its many paths. 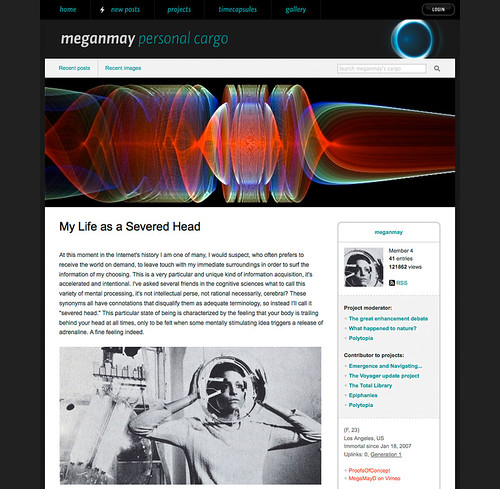 The site makes equally effective use of imagery. Selecting ‘Recent images’ calls up a display full of pictures in rounded boxes, this time resembling 35mm slide mounts. Clicking on a picture enlarges it for viewing and selecting the title takes you to the full entry in the contributor’s ‘personal cargo’. Better still is SpaceCollective’s continuously expanding gallery. The Web is rife with similarly diverse and sometimes bizarre picture collections, but blogging templates usually squeeze these idiosyncratic image galleries into narrow vertical columns with restricted visual impact. Gorter’s widescreen gallery offers hundreds of resonant and inspiring juxtapositions between pictures and occasional short texts – the images often link to external sites.

Here, at last, screen design starts to achieve the complexity of composition and layout – and the possibility of a syntactic relationship between images – that we take for granted on the printed page. SpaceCollective is so fluent, capacious and adaptable that the system has become the foundation for a new publishing platform, Cargo, already in use by Bruce Mau and other designers.