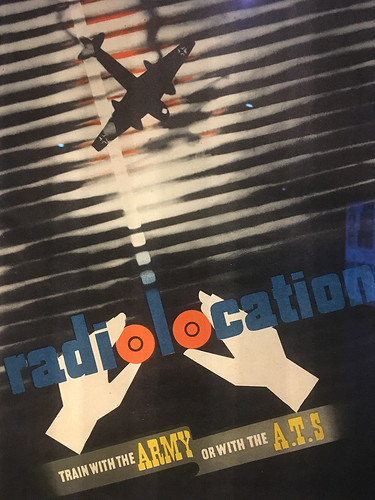 Visitors to this exhibition may have noticed a London bus ticket modestly tucked into the corner of a large frame of drawings. It contains the embryonic forms of what was to become a famous Guinness poster of 1956. A few Biro lines hurried together in a moment of clarity and signed by Games probably before he left his seat. Some designers love this sort of thing: lunchtime epiphanies rattled off on cigarette packets and napkins seem to lend support to the romantic notion of the ‘ideas men’. Yet ultimately this large retrospective reveals a very different kind of practice.

Organised by the Design Museum, ‘Abram Games. Maximum Meaning, Minimum Means’ brings together the highlights of a career that spanned six decades and saw commercial art develop to become the profession of graphic design. It is a collection that confirms a man of tireless invention, as prototype copiers and elegant coffee-makers take their place alongside the more familiar posters, stamps and logos that were to define this major contribution to British Modernism.

The work – which is hung more or less in a chronological order – reveals a consistent quality from the early years. A self-initiated poster for Airmail, designed in 1935 when Games was 21, cleverly exploits an open envelope. The piece demonstrates both careful attention to detail and a growing mastery over the airbrush, a skill Games developed while working in his father’s photographic studio. The manner with which the lettering was integrated into the composition anticipates the drive for visual economy that was to become his hallmark as he strove to achieve ‘maximum meaning with minimum means’.

During the next decade Games secured his reputation through a series of stunning posters for the War Office of which Join the ATS (1941) and Your Talk May Kill Your Comrades (1942) are the most familiar. These posters and many more from the period feature alongside postwar commissions for London Transport, the Festival of Britain, Guinness and the United Nations. The collection reveals his uncanny knack for blending a British wit and sensibility with the adventure of the avant-garde, in particular Surrealism. In See Britain By Train (1951) a carriage door forged into the shape of Britain hovers Magritte-like over a railtrack, while posters for BOAC from the same period carry a strong hint of Dali.

Despite the value to design students there is an irony in the choice of venues. Games tried unsuccessfully to discourage his three children from going to art school. The East End boy had not enjoyed his time alongside more privileged students at St Martins and had left to work in his father’s studio after only two terms. Yet crucially he recognised the value of life drawing and attended classes four nights a week until his conscription in 1940. After the war, and with his career firmly established, he returned to education as a regular visiting tutor at the RCA.

His students would have noticed how drawing was central to his method of generating ideas. While exposure to the avant-garde had broadened his outlook, it was his commitment to life classes that ultimately instilled the confidence to really explore figurative and geometric options. Development sheets framed alongside the London bus ticket swarm with thumbnails of hands and faces, all part of a relentless searching and wearing down of possibilities until finally, the right resolution emerged.

Seen within a contemporary educational setting it is these large frames containing his rough sheets, scribbled notes and the odd bus ticket that serve to remind us of the importance of drawing in all its forms: that and sheer hard work. Hardly minimum means!