Art without its bitter history

I have a problem with Stalin’s face. He looked exactly like my cat. Exactly. This led me to waste much time on obscurantist daydreams about reincarnation. Stalin (who died in 1953) comes back as Kitty whose master is a lifelong supporter of Leon Trotsky, his arch enemy in a previous life. Imagine relying on this scenario for your Gourmet Whiskas. Stalin / Kitty and Kitty / Stalin (who is also now dead) did not just look like each other but behaved in similar ways, which reinforced my musings. Stalin got pissed and threw up over the flowerbed of the world revolution, destroying the Marxist / Bolshevik future. For Kitty, whose urine made sure that no grass would ever grow again, every killing was a treat. How often did I see soft, warm innocents bloodily subjected to his playful claws. When Kitty passed away (for the second time?) there was great mourning in North London. Traffic came to a standstill as thousands of onlookers were crushed to death trying to glimpse the ‘Friend of the Little Bluetits’ lying in his coffin. Even now, years later, when Stalin’s face appears on television, a great cry goes up, ‘There’s Kitty!’ 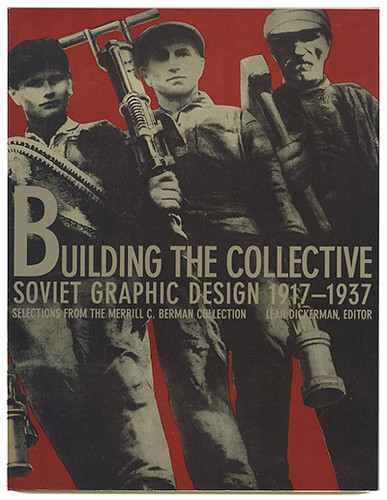 Now Stalin and his henchmen are being reincarnated in other parts of the worlds. Since the collapse of the Soviet Union various art academics (mainly American), egged on by dealers and collectors, seem to think they have uncovered a whole new market. In Building the Collective, we learn that the market in Soviet graphic design is ‘wide open’. Prices have ‘risen markedly’ as collectors and dealers have ‘entered the field’. In her introductory essay, Leah Dickerman defines collecting as a ‘consumption mode grounded in acquisitive desire’.

Merrill C. Berman, whose poster collection forms this book, is noted in the text for his ‘left-leaning’ interests. Apparently he started collecting ‘Russian’ after he had to sell his fine art collection in the wake of some stock market crash. One might ask why a ‘left leaner’ should be involved with the stock market in the first place. I thought that was a problem for the other lot. But there is worse to come. Berman comments that ‘with the breakdown [of Communism] things have begun to seem more benign, even romantic – like the Berlin Wall’. This is surely a most offensive attitude to take when you think of the many thousands of people who were victimised by the Stasi.

Dickerman’s introduction takes us on an interesting tour through the Russian Civil War that followed the Revolution, pointing out the great diversity of posters issued (over 4000 between 1918 and 1921) and the difficulties faced by the designers and artists who were trying to help the Bolsheviks. The powerful content of these works – the revolutionary process, the Revolution under fire, the Revolution’s expectations – was often matched by their graphic visualisation; well drawn (many styles), often witty (debunking capitalism), optimistic (sometimes sadly misplaced), occasionally frightening.

The period of the New Economic Policy in the 1920s is also well covered when ‘socialist advertising’ by Mayakovsky, Rodchenko and others was used to try to kickstart the shattered economy. I must confess that compared to the posters of the Civil War, I have often found this period of Russian graphic design tiresome and silly, the ideas and texts too laboured.

When Dickerman comes face to face with the Five Year Plans and Stalin’s ‘Revolution from above’, she comes unstuck. Carried away with enthusiasm for the work of Klutsis et al, she overlooks the political horror story of the Soviet Union in the 1930s. Towards the end of the decade, the first workers' state had sunk into the quagmire of the gulag system and the Moscow show trials. The Workers Opposition against Stalin had been brutally crushed and Trotsky’s lone voice, in exile in Mexico, was shortly to be silenced by an assassin of the GPU [the Soviet secret police]. Stalin even turned on his own supporters. None of this is ever mentioned, as though Dickerman has started to believe in the phoney glamour she sees in posters of this dreadful period. She even falls into a photomontage trap. Referring to Boris Belopol’skii’s ‘female proletarian’ poster of 1934, she questions the reality of the photographs used due to airbrushing. What she failed to discover is that the smiling figure in the front of the poster is from a famous photograph of a shock brigade worker taken a decade earlier, in what was a more optimistic period.

Try to think how life must have been for millions of people at this time. You are rock-breaking on one of the God-forsaken canal projects, half-dead from exhaustion, starvation, permafrost or baking heat. You look up and see the printed gaze of the tyrant who put you there, surrounded by adoring, able, well fed workers brandishing the latest equipment. In reality, Stalin never visited the factory floor, being much too paranoid to have any direct dealings with working people. Had photomontage not existed, it would certainly have had to be invented for Stalin.

Building the Collective offers nothing much to increase our visual knowledge. Most of the posters have been reproduced before. More importantly, it is inappropriate to show political design outside its historical and political context. There is a great wealth of photography documenting the life and often deadly times of this period. Some careful juxtapositioning would have helped to avoid the unnerving prospect of the posters’ assimilation into art history alone, divorced from their origins, enjoyed only for their often dubious aesthetic qualities.