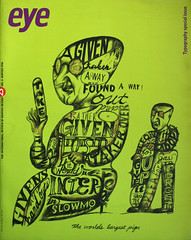 Caught in a graphic cage
Matthew DeBord
Branding the New York subway
Thirty-six point Gorilla
Monitor, Emily King
Just about every approach to describing typefaces has been put to the test. Now font names…
I design, therefore I am
Screen, Jessica Helfand
As avatars become increasingly complex, your on-line identity is only as effective as your on-screen visualisation…

Reputations: Hans-Rudolf Lutz
Yvonne Schwemer-Scheddin
‘I am addicted to teaching. I have a compulsion to explain the world to others, and to have it explained to me again and again by the students’
Adobe unpacks suitcase rival
Brett Wickens
Symantec’s Macintosh font handler, Suitcase, has had a radical overhaul, but so has Adobe Type Manager Deluxe 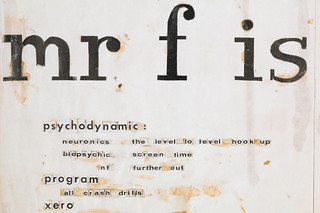 Project for a New Novel
Rick Poynor
J. G. Ballard’s ‘Project for a New Novel’ from the late 1950s makes text obsolete, and the author into the designer
The man who invented graphic design
Steven Heller
When W.A. Dwiggins called himself a graphic designer, he coined the phrase that would define professional practice
Read this aloud
Ursula Held
Pierre di Sciullo’s experimental alphabets interrogate the conventions that govern the way we read, write and talk 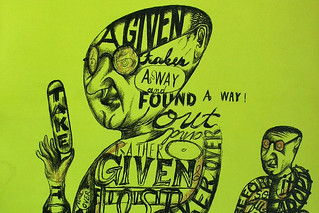 Fellapages
Rick Poynor
For thirty years Edward Fella was a commercial artist. In his sketchbooks, he applies his mastery of lettering and illustration styles to brilliant improvisations
Putting type in its place
Liz Farrelly
For many of London’s editorial designers, type plays a supporting role. Content and narrative is as likely to be found in the images as in the words
Invasion of the copy snatchers
Andrea Codrington
A project by J. Abbott Miller's Design Writing Research expands ancient and modern type into the third dimension
Techno craft
Julia Thrift
David James is a typographer with an exacting eye, who blurs the boundaries between graphic design and art direction