Every word in its place 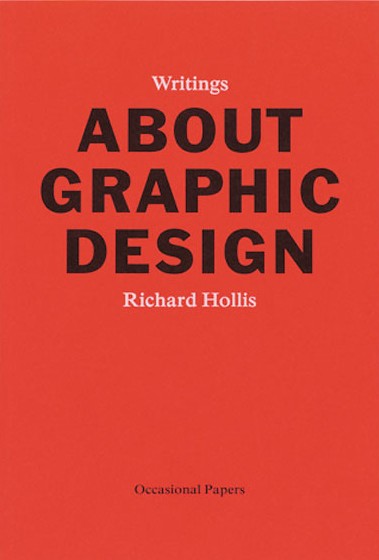 Reading Richard Hollis’s writings, one can’t help wondering how the esteemed graphic designer, writer and educator would account for himself in design history. Known for, among other things, his graphic design for London’s Whitechapel Gallery in the 1970s and 80s, for visualising in book form John Berger’s fine arts documentary Ways of Seeing, and also for writing Thames and Hudson’s Concise History of Graphic Design (1994), in 2012 Hollis is an active and highly respected elder statesman of British graphic design.

About Graphic Design, published by Sara De Bondt and Anthony Hudek’s Occasional Papers, reprints obituaries, lecture notes, conference papers and essays (several of which were first published by Eye). Given that the median age of design professionals is currently less than the 40 years over which the texts were written, the temptation to idealise Hollis is strong. At the same time, it is clear from reading his work that Hollis is not one to be heroised. One is certain he would eschew acceptance into any canon without good and proper reason. In conversation with Robin Kinross, Hollis maintains that design and writing are ‘such different activities … If you’re asking how the two things, history and practice, relate, I don’t think they do very much.’ But one can still try to draw connections between his design and his writing. In both, Hollis is resolute about his place and role. He is never one to impose his own priorities on a client’s message.

Stuart Bailey has described Hollis’s presence in his graphic work as ‘tangible but never intrusive’. One could say the same about his writings. In them, words rarely make their way on to the page from off the cuff; nor do they thrive on poetic flourishes or a character-filled narrative voice. This does not mean Hollis is shy about proffering an opinion. If collected works expose threads of concern and preoccupations over the course of a career, this compilation reveals the committed search for a rational and coherent method.

That entails meticulously detailed formal description. While Hollis disavows any special expertise as either a writer or a theorist, as a person sufficiently schooled in semiotics and structuralism he arrives at what seem to be theoretically informed conclusions via hands-on know-how, through his profound awareness of the designer’s relationship with technology and of how individual works are produced or made. He attaches particular significance to the different relationships of text and image enabled by the various technologies of letterpress, lithography, photography and digital means of production.

Once applied, his careful method culminates in incisive conclusions, in remarks that seem to encapsulate his subject in a nutshell. Hence his description of New Wave typography as ‘decorative functionalism’, his observation that Saul Bass ‘translated the idea of the commercial ad logo into film promotion’, that Josef Müller-Brockmann’s ‘success was in turning the experimental achievements of the pioneers into a method’ and his dismissal of Edward McKnight Kauffer as given to nothing but ‘crass adaptations of cubist mannerisms, customising the message with a snobbish vulgarity’.

The lecture notes included here go further, to expose the foundation of Hollis’s pedagogy and other writing. In these, the origin or source of all graphic design is the mark, from which Hollis follows the evolution and use of specific signs and symbols, such as the star or the swastika. At the same time, he writes as someone laying down a blueprint for future work. Articulating a framework and taxonomy, he is fastidious about his terminology. Hollis writes graphic design history while wondering out loud how that history should be told or constructed and what general qualities should warrant incorporation into a canon. Ultimately, he does in writing what he claims to respect in the practice of graphic design. He too, uses all the tools at his disposal to search for form ‘when there wasn’t language to express something’.

Designed by Hollis with a red uncoated lightweight cover, About Graphic Design is an object of characteristic casual restraint. Inside, it is printed in black and white, and typeset in a typeface that Hollis has customised himself. The thumbnail images act as reference points rather than heightened aestheticised simulations.

Given that restraint, this is neither a book to idly flick through, nor one that will be consigned to the coffee table. It is one to be consulted if you’re not the kind of person who can blithely accept the value of images you’ve seen reproduced countless times before. It is a book to read in order to see the works of twentieth-century graphic masters, such as Alan Fletcher, Nicolete Gray, Edward Johnston, Germano Facetti and Jost Hochuli, as if for the first time.