Lucinda Rogers finds something rich and strange in the streets of New York. Her drawings will be the subject of a substantial book – if it gets the support it needs via crowdfunding 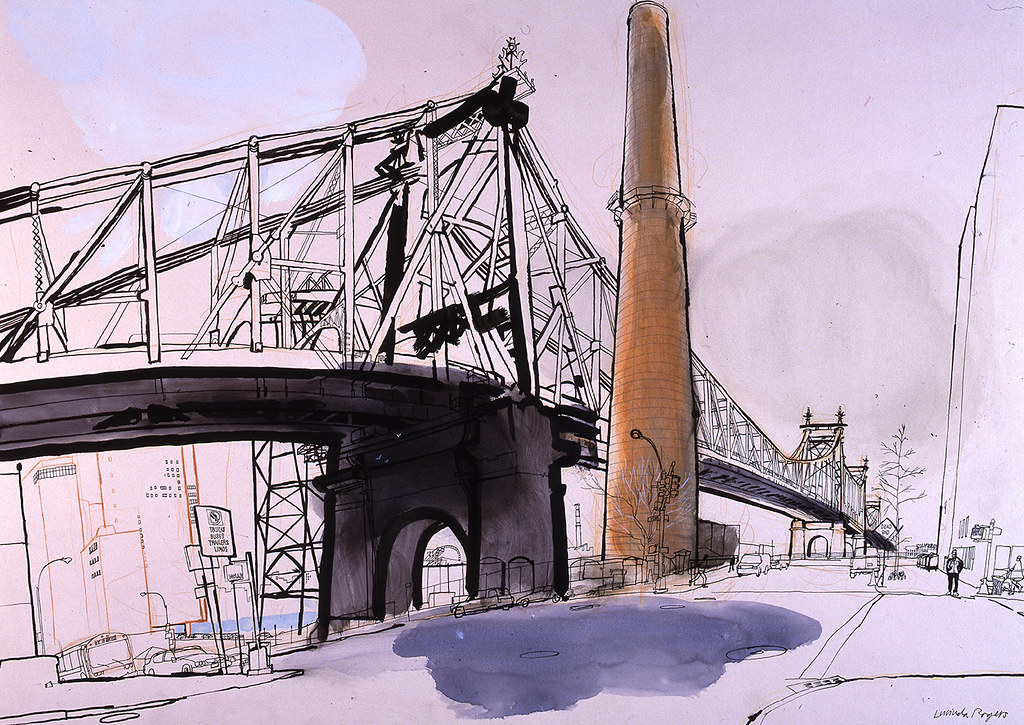 The city is both familiar from movies and books and utterly alien at the same time: the smells, the sounds, the extreme weather, wide-open vistas and the brusque friendliness and random conversations that can be so thrilling to a shy English visitor, writes John L. Walters.

When reportage artist Lucinda Rogers first set foot in Manhattan in 1988, she was similarly ‘gobsmacked’. Staying with a fellow student in the Upper West Side, she walked around the city with a small A6 sketchbook, drawing the streets, the buildings, the workers, the city-dwellers at work and play. ‘I developed a taste for the aesthetic of New York,’ she recalls. Two years later, equipped with a 33 x 42 cm watercolour book, plus pen, ink, crayons and watercolours, Rogers returned to the city for three months to make a more deliberate record of its people and places, finding places where she could settle down to create the entire artwork in the open. 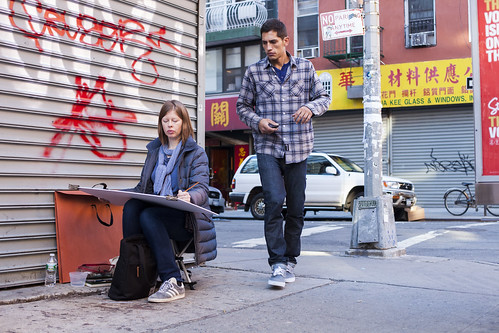 Rogers’ views of New York – which will become a book if fully supported – may be a surprise if you have only seen her exhibition ‘Employment Land Portfolio’, in support of the Tottenham businesses threatened by redevelopment; her depictions of the workers and arcane machines of Baddeley Brothers; (see Eye 91) or her warm observation of the market vendors of Ridley Road in ‘On Gentrification’ (see Eye 95), all drawn in her home territory of East London.

She has visited New York 26 times in 30 years, with an average stay of around four weeks: the trips add up to about 2.4 years in total. After the first few trips the pictures became larger, often taking six to eight hours to complete a drawing, and she started to use coloured paper. ‘I really have to be there to draw it,’ says Rogers. ‘It’s quite safe. You find a nice, “daily life” side of New York – the merchants selling things on the street – and people are aware that you’re doing your work. Nobody ever questions what an artist is doing.’ 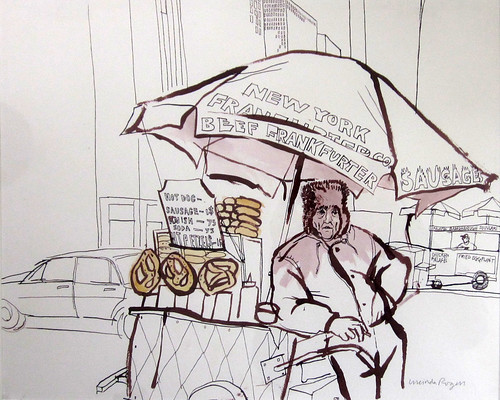 Yet over a course of a day, the New York light can change quite dramatically. Does this affect the way Rogers draws? ‘My pictures aren’t about light,’ she says, ‘they are more about form. Light doesn’t come into it the way it would with an Edward Hopper.’ Rogers loves scale and contrast. ‘I love to draw these gigantic bits of metal, like the 59th St Bridge, and compare them to a tiny car going by. I love to see a face up close.’

Over past three decades, apart from a couple of exhibitions, Rogers’ New York drawings piled up behind the door of her London home. In some instances, she took unfinished drawings back to New York so that she could complete them sitting in exactly the same place. But now the opportunity to make a book via Kickstarter may give her the chance to present these pictures as a coherent body of work – to bring these pictures together for the first time and tell a many-faceted story of this always dynamic and changing city. 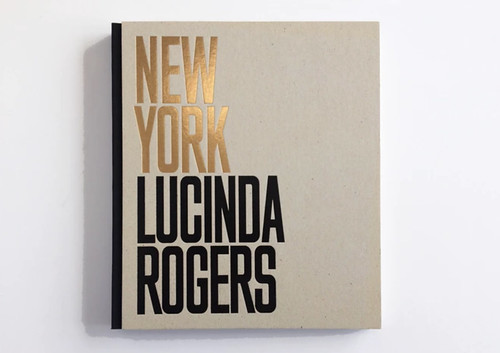 My Eye magazine colleague Simon Esterson is art directing the book, organising the drawings geographically rather than chronologically. He is using the grid of Manhattan as a system within which to order the tiny nuances and sweeping streetscapes depicted by Rogers. ‘Lucinda’s drawings are not the predictable views of New York, says Esterson, ‘but they capture the details, the side streets and, above all, the energy of the city.’ 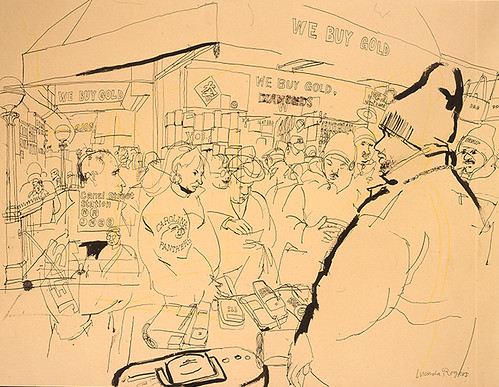 Brooklyn Bridge, 1999, with a view of the World Trade Center’s twin towers in the distance. 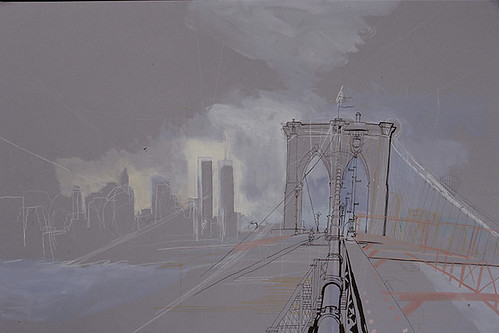 An additional, poignant narrative is embedded within the book. In some of Rogers’ earlier drawings, the famous twin towers of the World Trade Center are just there, in the downtown financial district, as they so often appear in snapshots and documentaries made in the more innocent times before the destructive attacks of 11 September 2001.

In her pictures of Ground Zero from December 2001, Rogers confronted the towers’ absence: she sought permission to enter and draw the ravaged site. A picture of 6th Avenue from that time draws viewers’ eyes towards a white glow downtown; the harsh light comes from the arc lights that illuminated the reconstruction work. 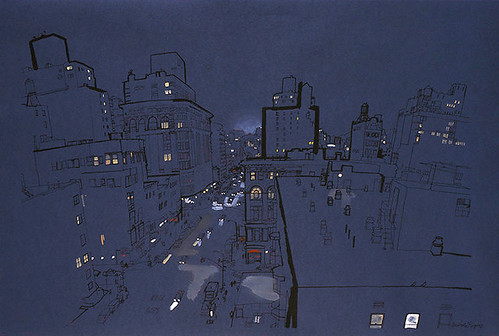 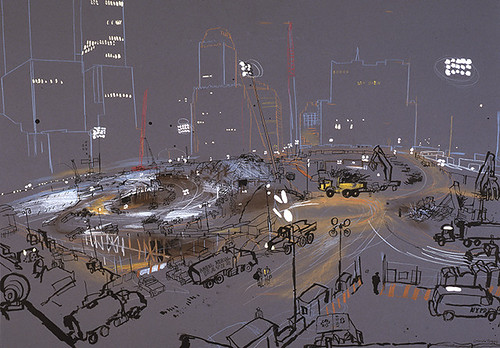 Rogers’ drawings have always had a powerful sense of place, whatever their purpose or context. She is rarely a passive observer, and her work invariably invites viewers to become involved in the neighbourhood and people she shows. The work is entirely personal – art as well as reportage. 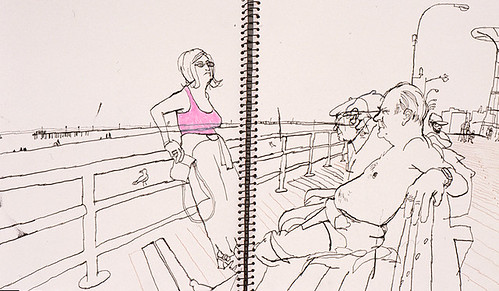 Look at Rogers’ New York drawings, and you see what she notices: the little figure going by, half hidden by a vehicle; the lettering on a crate or billboard, picked out with her distinctive black line; the way a lone, bespectacled diner holds his spoon, the curve of a street lamp. It is a privilege to spend a moment in her shoes, not only examining the details, but also absorbing the breadth of Rogers’ vision, her unique way of interpreting colour and atmosphere. With a restrained palette of coloured papers and watercolour washes, she conjures an entire bustling, multilayered, multicoloured world, so familiar, yet also rich and strange. 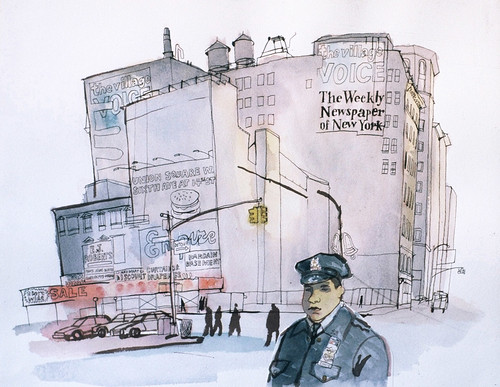 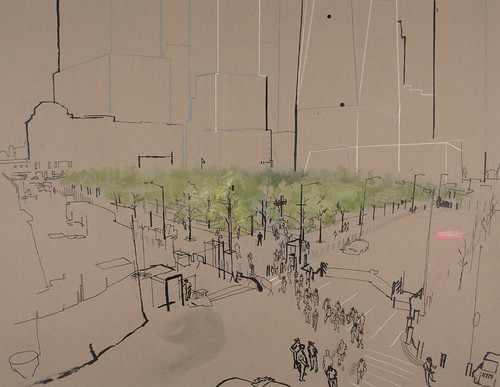