Guidebooks have enticed visitors to resorts since the nineteenth century. The third in Justin Burns’s series about coastal graphic design in the UK 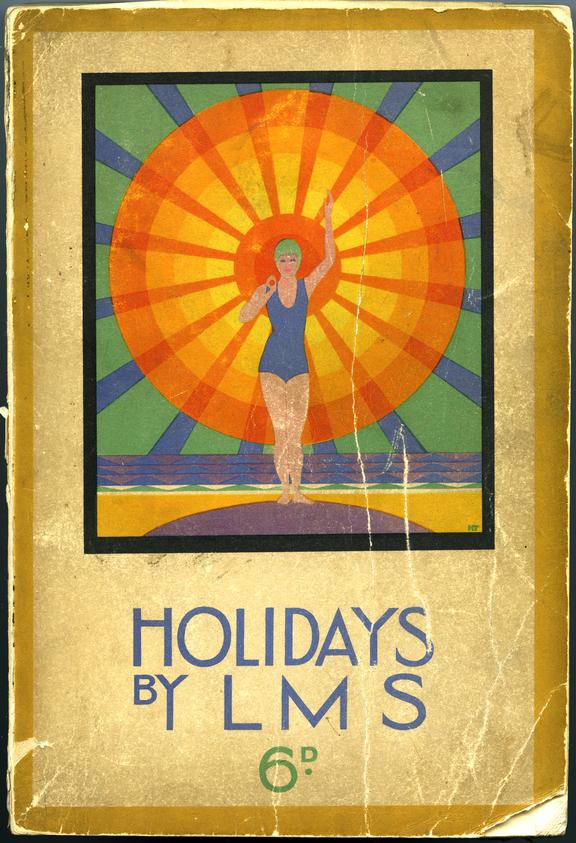 For decades, the guidebook has navigated visitors through the bright lights of the seaside, showcasing the attractions and architectural splendour of the British coast, writes Justin Burns.

British publisher John Murray first produced Murray’s Handbooks for Travellers in 1836, providing destination information for the international tourist. The books initiated the idea of ‘seeing the sights’, by reviewing and rating attractions and accommodation. The handbooks inspired influential travel publishers of the time, such as Karl Ludwig Johannes Baedeker, who deployed the now familiar star rating system in the worldwide Baedeker Guides. 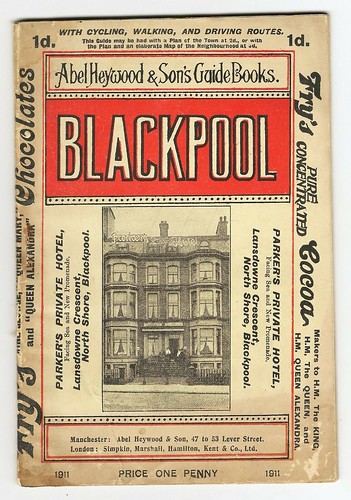 In 1866, the Manchester publisher Abel Heywood observed an increase of travel for pleasure by train, and in particular by the working classes. Heywood produced concise ‘Penny’ travel guides to inform the tourist and supplement their excursions, initially to the Northern spa and coastal towns. Upon retirement, his son John, developed the publishing house which produced guidebooks for an increasing number of towns and resorts across the British Isles, from Aberystwyth to Weymouth. 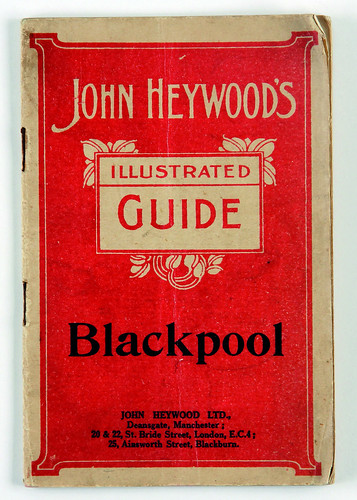 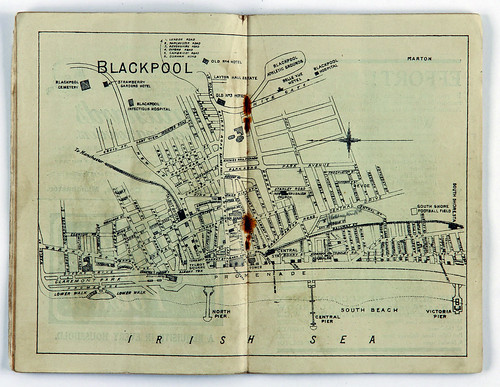 London publisher Ward Lock began publishing ‘Shilling’ guides on green paper board in 1880. The illustrated publications became known as ‘Red Guides’ from 1892, when the covers changed to the now familiar vermillion cloth. Until the mid-1970s Ward Lock produced guidebooks for seaside resorts, towns and cities across the UK, furnishing the traveller with information on local history, attractions, architecture and hospitality. 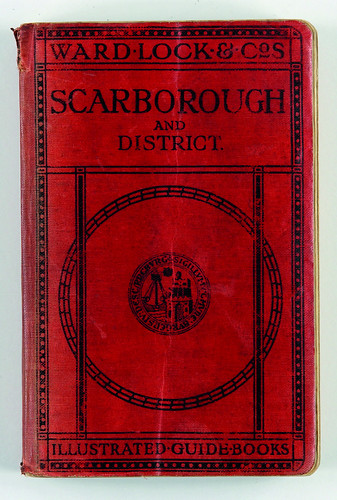 In the early 1900s, as with posters of this period, many guidebooks would allude to continental upper-class connotations to sell the resort of choice, promoting experiences likely to found on the French Riviera. Commercial guides would market their seaside destinations to aristocratic classes, often limiting their appeal to the working classes. In contrast to many commercial guides, Ward Lock Guides provided an accompaniment to the seaside, with advice on the resort, providing the tourist with pictorial, mapped navigation along the promenade and natural coastline. The red guides provided an advertising platform for rail operators and hoteliers in resorts across the UK, with Ward Lock publishing more than 50 handbooks that promoted the British seaside. Writers and designers for Methuen & Co’s Little Guides and Heywood’s Guides would communicate the towns’s identities through their cover designs, pictorial content and editorial tone. 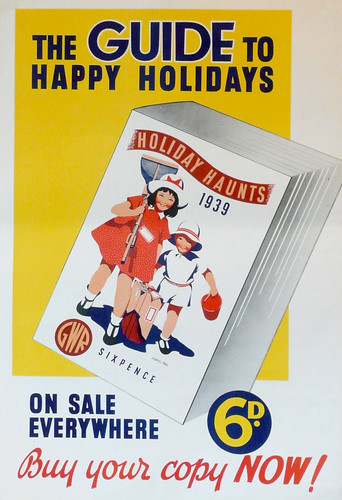 As with advertising and posters of the time, railway operators seized the opportunity to entice passengers on journeys to coastal Britain in the early 1900s with regional descriptive guidebooks. Great Western Railway (GWR), London, Midland and Scottish (LMS), London and North Eastern Railway (LNER) and Southern Railway (SR) all published guidebooks and in 1906 GWR produced the first of 32 editions of Holiday Haunts, a handbook for tourists exploring the coastal delights of the ‘Holiday Line’. Holidays by LMS promoted destinations with dynamic pictorial representations of holidaying in the UK and was produced by Bemrose and Sons (founded in Derby in 1826 by the writer William Bemrose), which started as railway timetable publishers. LNER produced its annual Holiday Handbook, commissioning poster artists such as Frank Newbould to promote the resorts of the East Coast.

Advertisement for The Holiday Handbook for the Yorkshire Coast, LNER. Illustration by artist Laura Knight, 1929. 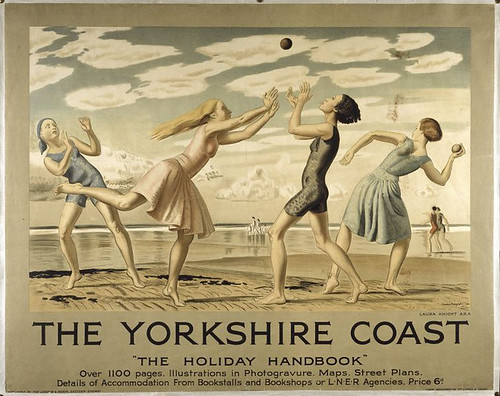 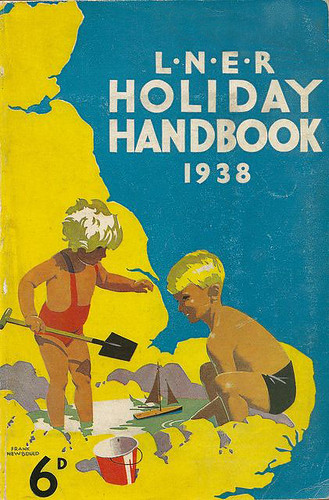 In 1927 William Teasdale and Cecil Dandridge looked to standardise publicity design for LNER posters guides and advertisements, commissioning Eric Gill to design a typeface that would provide clarity without ornamentation in the design of their promotional material. While the Gill-designed LNER logo was applied to guides from 1933, the cover lettering would often vary and evolve, not always aligning with the guidelines set by Teasdale and Dandridge. 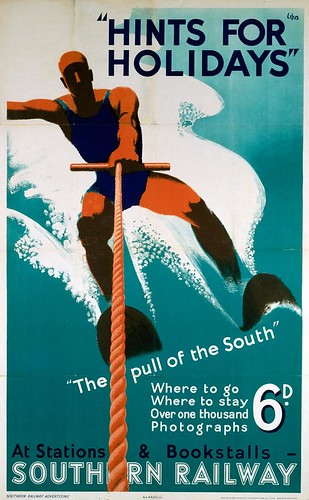 Hints for Holidays outlined the delights of the coast to be seen by the Southern Railway traveller, with designs promoting resorts such as Bournemouth, Brighton and Ramsgate. Southern Railway would also promote excursions further afield, with designs by A. M. Cassandre and George Massiot Brown, in partnership with the Northern Railway of France and the ALA Steamship Company. 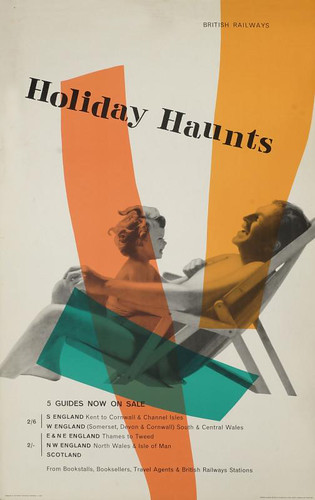 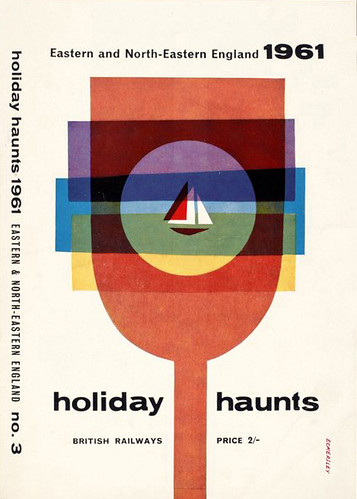 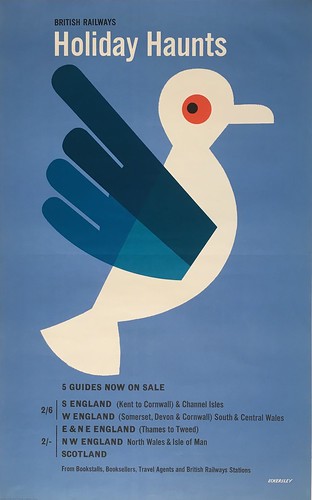 Following nationalisation in 1948, the GWR Holiday Haunts handbook became the coast-to-coast template for the British Railways (BR) network. Hans Schleger and Tom Eckersley – inspired by Cassandre and Edward McKnight Kauffer – continued to produce designs for the BR Holiday Guide and Holiday Haunts handbooks. Edited in geographical sections, the operator handbooks contained photographs, maps, advertising and descriptions of municipal attractions. Guidebooks were advertised as an essential accompaniment for a trip to the seaside. 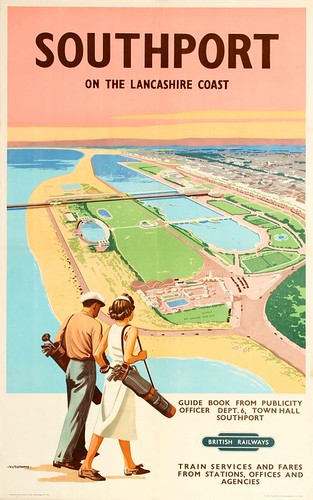 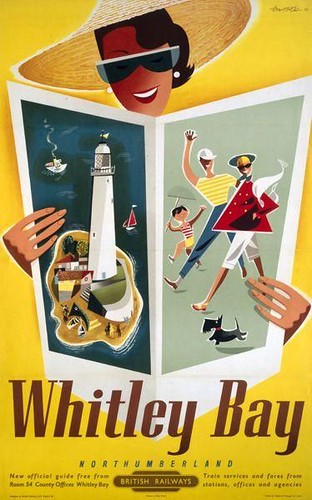 UK seaside resorts such as Blackpool, Margate and Southend would continue to attract visitors with a bolder advertising vernacular, appealing to the day-tripper and Bank Holiday weekend holiday-maker in the 1970s and 80s. Through the recent resurgence and regeneration of the seaside, many resorts are continuing to articulate the sights to be seen through social media, online and printed guides to accompany a visit to the coast. 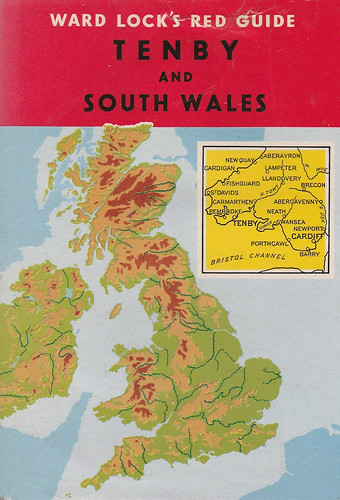 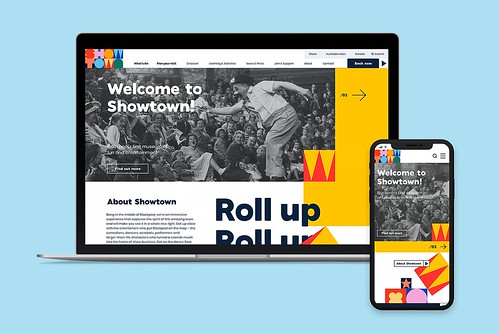 Other Articles By Justin Burns