‘A Recent History of Writing & Drawing’ at the ICA 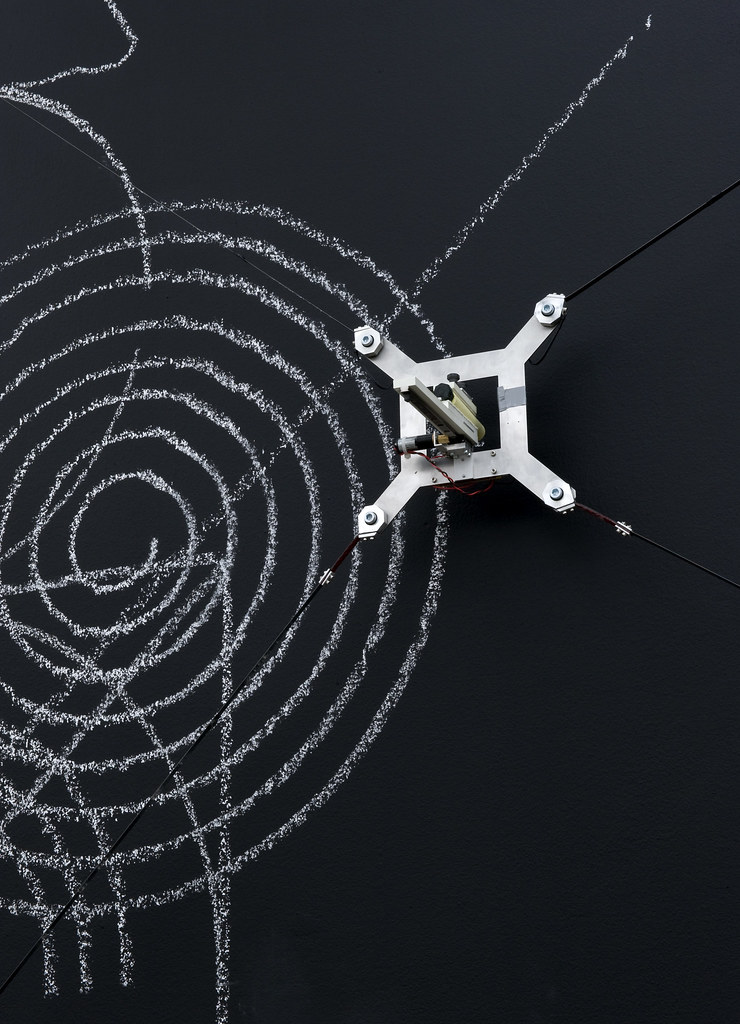 It’s not an obvious design or art exhibition – more like an interactive playroom from the design museum of our dreams.

There are just four works on display at the ICA’s A Recent History of Writing & Drawing, a collaborative project by Jürg Lehni and Alex Rich, which comes to an end on 31 August 2008. 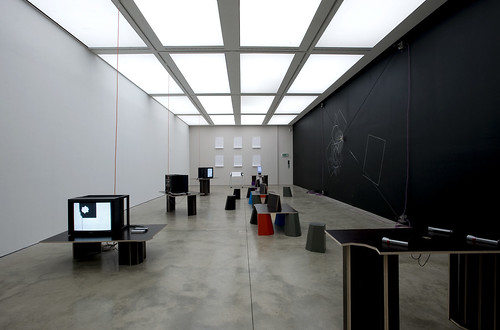 The star of the show is Lehni’s Viktor – a chalk-drawing behemoth that straddles a big part of one wall. Viktor is a successor to Hektor, Lehni’s famous spraypainting robot. Both are physical systems for writing and drawing, with motors, coils, cables and a drawing head controlled by bespoke code – see ‘Tools to make or break’ (Eye no. 60 vol. 15), David Womack’s article about Lehni's groundbreaking Scriptographer, a scripting plugin for Adobe Illustrator.

Alex Rich, Lehni’s collaborator, suggested chalk for Viktor’s ‘hand’ in order to lose the loaded associations of spraycans. (Though ‘chalk and blackboard’ brings forth an equally vivid set of associations, both positive and negative.)

The other two writing systems on display at the ICA show (curated by design historian Emily King) are by both Rich and Lehni: Dots On Demand is a program that turns short phrases into a poster made with an X/Y cutter. A phrase such as ‘TOO MANY COOKS’ or ‘MORE THAN THIS’ is scaled and turned into a dot typeface similar to the lettering for the cover of the Duchamp / Hamilton Green Book (see Eye no. 38 vol. 10), though Rich employs a different matrix. 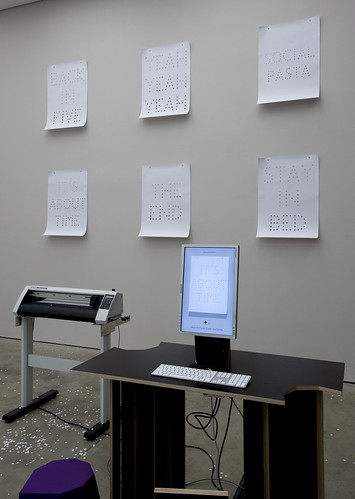 News On Demand uses a hand-held head from a dot-matrix printer to make short headlines: hold down the button on the printer ‘gun’ and it sprays a series of characters at a piece of paper. A graceful, writing-like left to right movement produces a legible print-out; a circular movement makes appropriately shaped text and so on. The content: headlines from internet news sources. 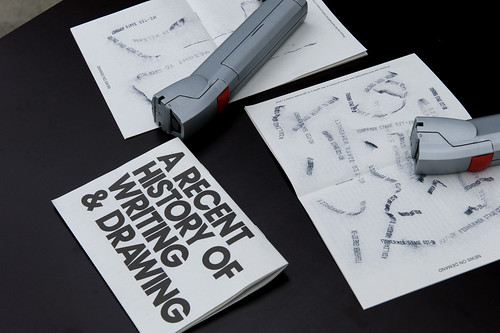 The remaining work, Lehni’s Flood Fill, is a kind of ambient TV art, based on a Commodore 64 algorithm that Lehni discovered as a child. It’s a delicate, virtual counterpart to the ultra-physical technology of the rest of the show, driven by a trio of Apple TVs. These, Rich explains, were chosen for their economy of price and means. Turning Apple TVs into C64s, which were similarly cheap back in the day, seems oddly satisfying. (See Khoi Vinh’s blog about the discreet charm of the Apple TV.)

Yet it would be unfair to underestimate the depth of thinking and programming behind ‘A Recent History of Writing & Drawing’. Lehni’s struggles with his devices, the very difficulties involved in bridging the gap between the virtual and the actual, are part of the show’s low-key drama. This is brought into focus by a series of Thursday night events in which guest speakers ‘interact’ with Viktor - chalk and talk, I guess. The last one took place on Thursday 28 Aug) with photographer Jason Evans, the man behind The Daily Nice.

The series began with Paul Elliman, who played a handful of recordings (including sounds from the NY Transit, and a Madrid subway announcement) before playing an essay recited by Emma Clarke, best known as the voice of London Transport, while Viktor obediently chalked out a wordsearch puzzle. Elliman also played Clarke reading Whitman, and the instructions for wiring a plug. You had to be there. 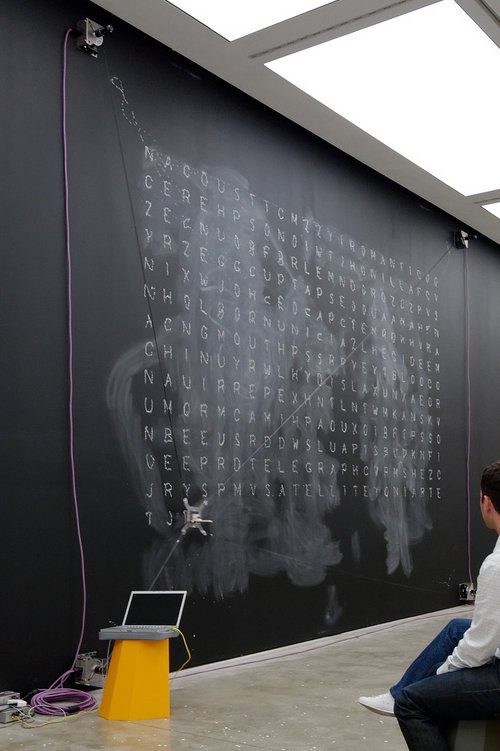 Other participants have included Ryan Gander and Leila McAlister, James Alwyn and Caitlin Elster (below) . . . 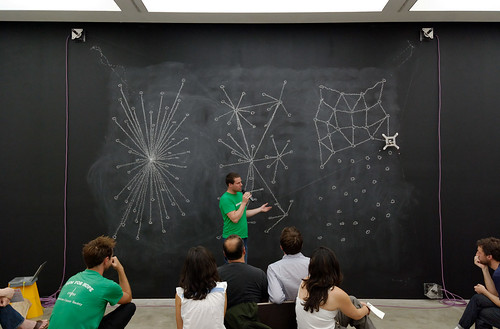 and architect-composer Tuomas Toivonen (below) with his Hyalonium, an electronic glass harp. 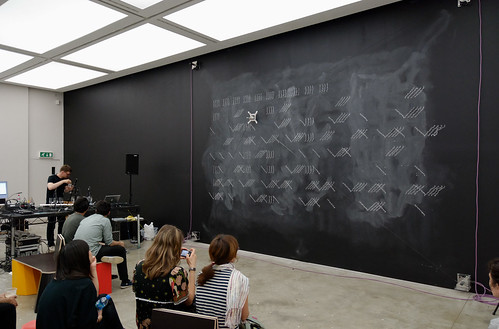 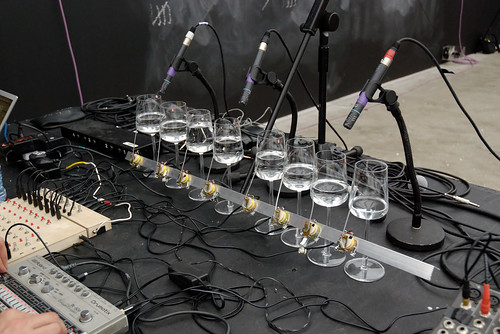 As to what Jason Evans made of Viktor – and vice versa – let us know.