By Peyton Skipwith and Brian Webb<br> Designed by Webb & Webb<br>Published by Lund Humphries in ass. with The Fry Art Gallery, £35. 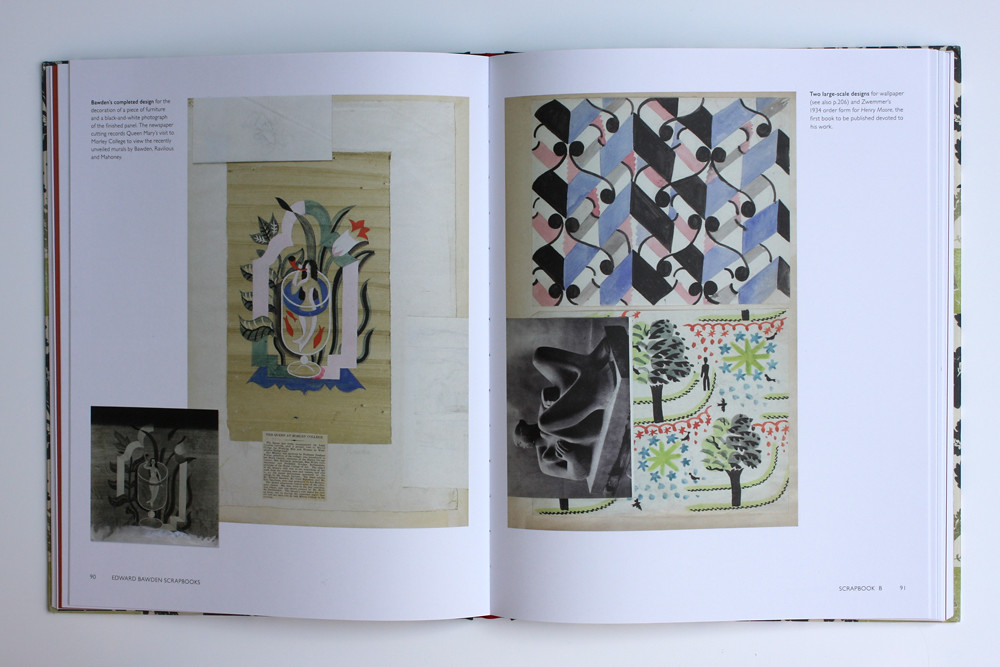 For many years he taught at the Royal College of Art, and during the Second World War, he was an official war artist, serving in France, Italy, Africa and the Middle East, surviving a torpedo attack off the coast of South Africa. His work forms part of the exhibition ‘Ravilious & Co: The Pattern of Friendship’ at the Towner Gallery, Eastbourne. This collection of carefully photographed pages from Bawden’s scrapbook could have easily had the same subtitle.

Spread showing three exquisite corpses / cadavre equis alongside Justice of the Peace letterhead, a Victorian carte de visite, a plumber’s bill-head and three head studies (by Alan Sorrell).
Top: spread showing designs for a piece of furniture and wallpaper alongside an order form for a book about Henry Moore, published by Zwemmer, 1934. 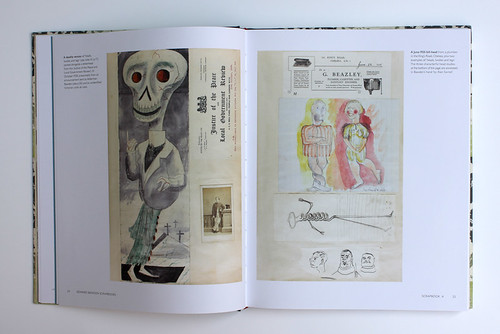 The five scrapbooks shown here reflect a life well lived. In addition to a cornucopia of materials made by Bawden himself, the books were glued up with invitations, greetings cards, letters, drawings, photos and postcards – maybe scrapbooks were the nearest thing mid-century artists had to Instagram. As with today’s social media, Bawden’s entries show his connections to many other talented friends, colleagues, clients and minor celebrities – there are letters and cards from Peggy Angus, Evelyn Dunbar, Milner Gray, Ashley Havinden and many more. There’s a ticket for ‘Varnishing Day’ at the New English Art Club, and gossipy fan mail from polymath typographer Robert Harling: ‘Your South Bank mural is quite superb … So few artists seem to know how to set about a mural. Yours seems to have imagination, power, pattern-making, invention – all in great abundance.’

Spread showing working roughs for Bardfield wallpaper and a selection of Christmas cards from C. Ripley and Margaret and Ashley Havinden and an ink-blot caricature on a used envelope. 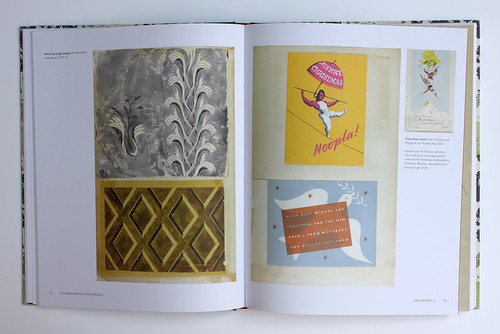 Chapter opener for Scrapbook B including a calendar type specimen sheet for Monotype illustrated by Eric Ravilious, 1933. 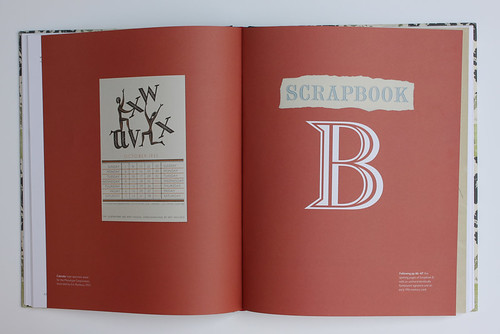 Bawden delighted in sticking everyday things such as a matchbox labels, Portuguese sardine wrappers, cigarette cards, tickets and other ephemera alongside his own memorabilia. He clearly regarded what he later called this ‘mass of ancient rubbish’ as a resource that could be mined when some work was needed in a hurry; there are plenty of his own drawings, watercolours, hand-coloured proofs, rejected designs and trials. These crowded spreads, together with an erudite introduction by Peyton Skipworth and decent captions, make Edward Bawden Scrapbooks a book that will fascinate casual browsers as much as scholars of this fascinating network of artists, illustrators and designer.

Four from a series of six trial designs for The Razor’s Edge by W. Somerset Maugham for the Vanguard Library. The design on the bottom right is marked up by Bawden for setting in metal type. 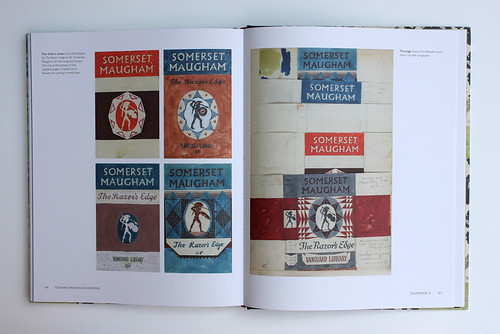 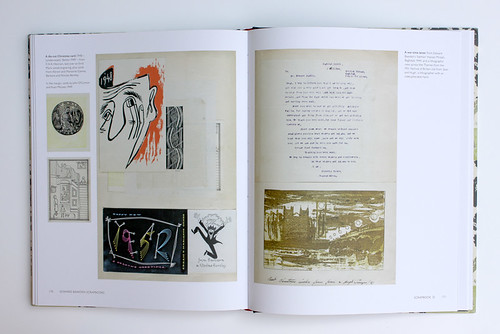 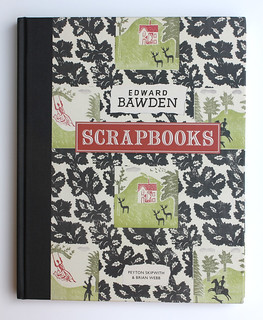