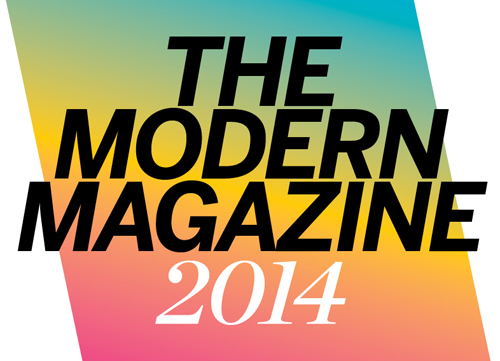 The second Modern Magazine conference organised by magCulture’s Jeremy Leslie was an enthusiastic celebration of the power of editorial design. The focus was on the relationship between print and digital, and on the differences between independent publishing and the mainstream, writes Joseph Bisat Marshall.

Liv Siddall (from It’s Nice That) hosted proceedings and introduced the first speaker, Rob Orchard, editor of ‘slow-journalism’ magazine, Delayed Gratification. The magazine launched four years ago during what Orchard describes as a ‘renaissance of independent magazines’ that countered the ‘print is dead’ argument. Orchard explained that in recent years, news groups have reached a point where they now ‘value being first above being right’ and journalists fill space with speculation and fake controversies.

Rob Orchard, editor of Delayed Gratification. ‘They have way too much space to fill … we have 120 pages every three months. Photo: Rhys Atkinson.’ 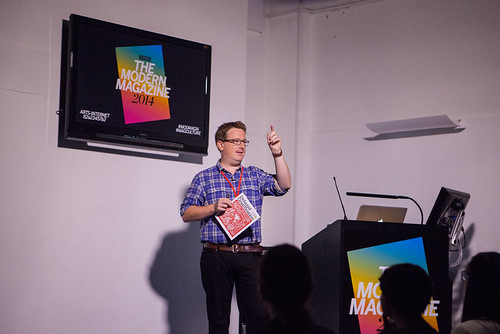 Spread from Delayed Gratification no. 15. 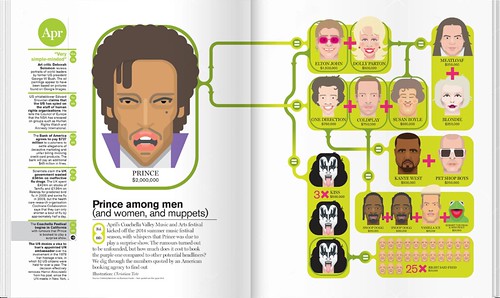 Cover of Delayed Gratification no. 15, featuring artwork by Ai Weiwei. 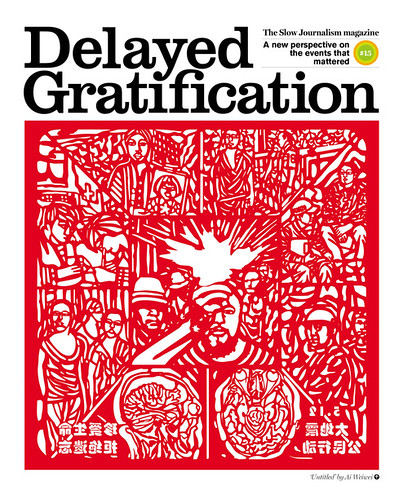 Delayed Gratification was conceived as a reaction to this, and Orchard’s talk drew on examples such as the BBC’s ‘breaking news’ report on the birth of Prince George, when reporter Simon McCoy announced there was ‘plenty more to come from here of course, non of it news’.

Now on its fifteenth issue, Delayed Gratification often returns to stories ‘after the dust has settled’. They are currently looking to develop documentaries based on articles from the magazine, add graphic novel journalism into the mix, and publish long (10,000-word) features. 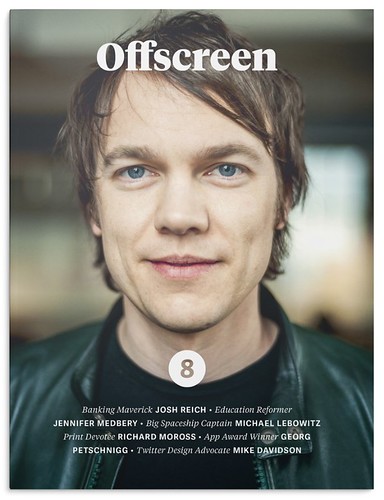 Kai Brach of Offscreen took the audience through the story of his magazine’s creation. Brach, formerly a Web designer, realised that his entire span of work life could fit on a micro SD card, saying that ‘digitally thin’ material can be ‘humanly thin’ also. Offscreen grew out of his desire to reconnect with real experiences: ‘Print is linear, digital has no edges. Print gives mental space.’

Spread from Offscreen no. 9, founded by Kai Brach.
Brach travelled the world in an attempt to reconnect with people. He said, ‘things became real through the people I met and faces I saw.’ 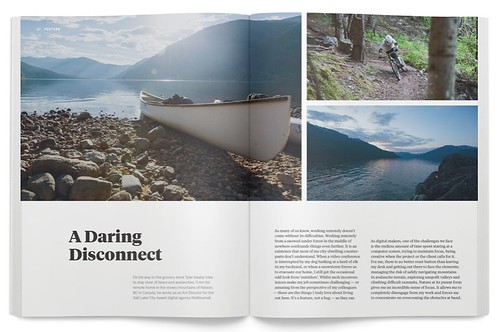 The Gentlewoman no. 10, edited by Penny Martin and art directed by Veronica Ditting. 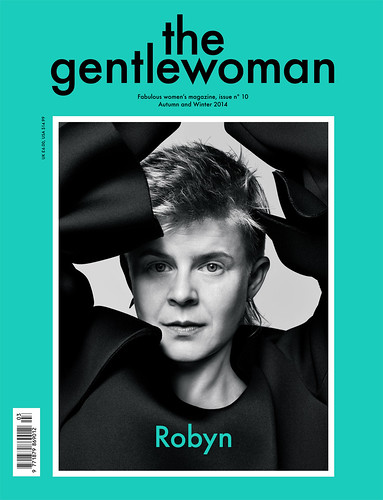 Gratuitous Type no. 4, designed and edited by Elana Schlenker. Schlenker’s concept grew out of mainstream magazines’ tendency to design spreads that include ‘big, sexy letters’ that fill the page. 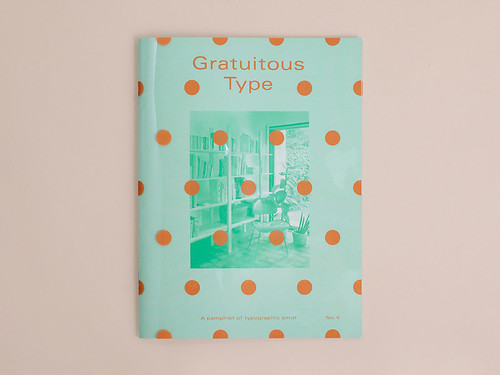 We also heard from Elana Schlenker (designer and editor of Gratuitous Type) and Danny Miller (Little White Lies / Church of London, now Hüman After All.) Gratuitous Type is the subject of an exhibition at KK Outlet in Hoxton Square until 31 October 2014. 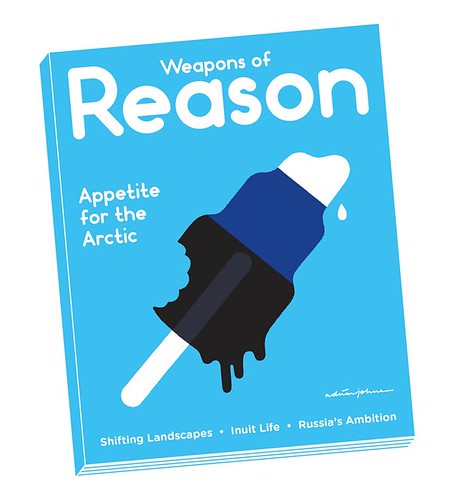 Miller’s new venture, Weapons of Reason, takes its name from a Marcus Aurelius quote: ‘Never let the future disturb you. You will meet it, if you have to, with the same weapons of reason which today arm you against the present’. The magazine aims to articulate complex geopolitical issues in a way that is widely accessible.

Front and back cover of Riposte no. 2, edited by Danielle Pender and art directed by Shaz Madani. Back cover portrait depicts designer Deborah Sussman. 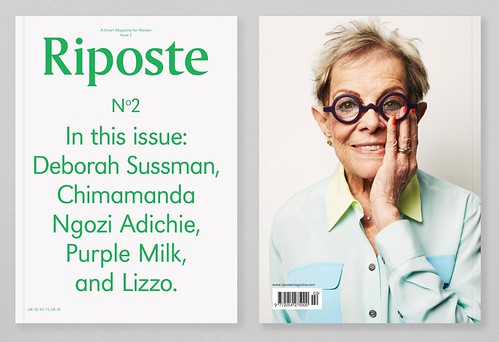 Danielle Pender, editor-in-chief of Riposte, a ‘smart magazine for women’, spoke about her problems with the mainstream magazine market, saturated with publications focused on looks. Pender amused the audience with her analysis: ‘You’ve got your classic fatty versus skinny … Closer has a three-pronged-pity approach to covers, and Heat casts women as real victims – failed relationships, failed diets – the good, the bad and the wobbly.’

Riposte challenges the expectations of a women’s magazine with a celebratory tone. Discussing the late Deborah Sussman, cover star of issue two, Pender said it is ‘possible to take pictures of older women without patronising them by making them look twenty years younger’.

Spread from Riposte no. 2 showing a poetry and illustration supplement inserted before a feature about Corita Kent (see Eye 35). 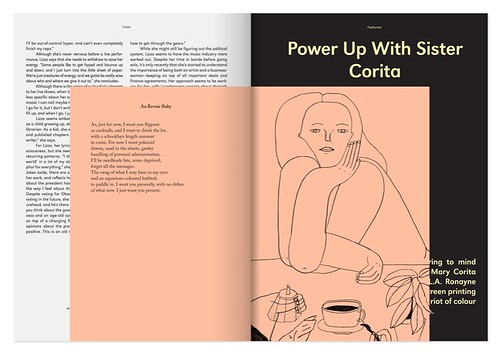 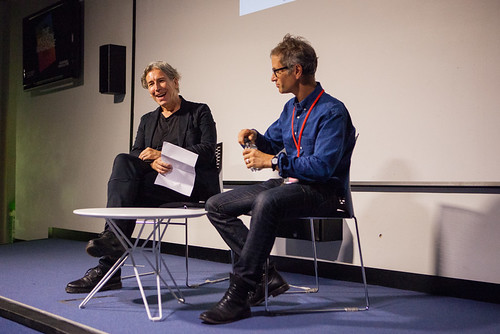 Adam Moss, editor of New York, declared his joy at being in ‘a room full of magazine geeks’. He said there was an ‘evident excitement about magazines’ that ‘isn’t being felt in New York’. Interviewed by Leslie, Moss recounted the history of New York, which began as a supplement to the New York Herald Tribune newspaper. When the Tribune went out of business in 1966, its editor Clay Felker and designer Milton Glaser founded New York as a standalone magazine (see ‘Design for eating: Milton Glaser’ on the Eye blog and ‘That’s art direction’, Eye 61). Moss explained that it had ‘a distinct sensibility related to a kind of bourgeois, bohemian cosmopolitanism that was very much happening in 1968’.

When Moss joined the magazine in 2004, it underwent a complete redesign [by Luke Hayman]: ‘It was in every possible way a rethink of the magazine from the cover to the back. But it was also a restoration project for a magazine so many people had loved.’ Moss also spoke about the way the magazine views digital material. ‘Our focus is making a really great print magazine’ … but New York also publishes 200 stories a day digitally. Moss explained that ‘though there is some separation, more and more we’re trying to all do this together’. 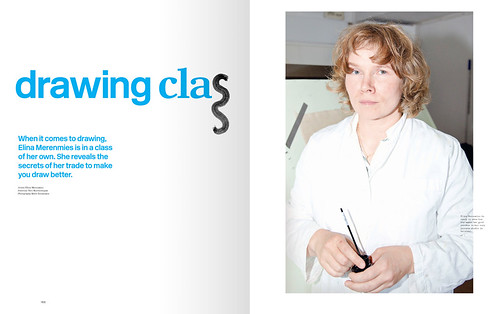 Spread from Poppy magazine edited by Simon Lyle, who is also the editor of drinks magazine Hot Rum Cow. 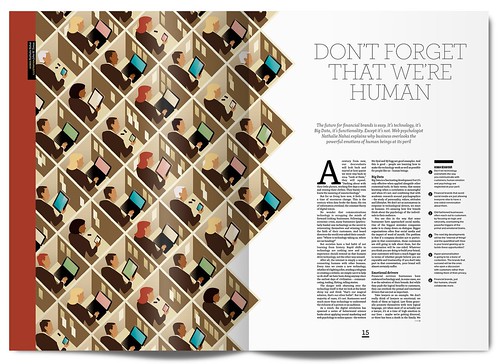 Other speakers included Peter Houston, editor of The Magazine Diaries, David Moretti, art director at Wired Italia and Pekka Toivonen, ‘art-dictator’ at FAT. Steve Watson, director of Stack Magazines, hosted a panel discussion with Danielle Pender, Simon Lyle, Rob Orchard, Danny Miller, and Kai Brach about the challenges of independent publishing. They spoke about distribution and the various problems involved in trying to make money from an independent magazine.

The Modern Magazine conference strongly endorsed the idea that the future of publishing is in print and digital. Independent magazines face multiple challenges in terms of sustainability, but all speakers spoke of them as an area in which the problems of traditional magazine publishing can be rectified. The solution may lie in narrowing the gap between the mainstream and the indies.

The indie panel at The Modern Magazine 2014. Photo: Rhys Atkinson. 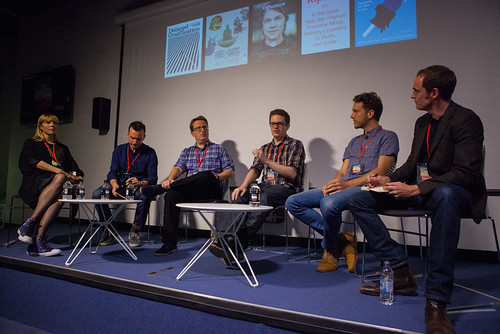 Other Articles By Joseph Bisat Marshall