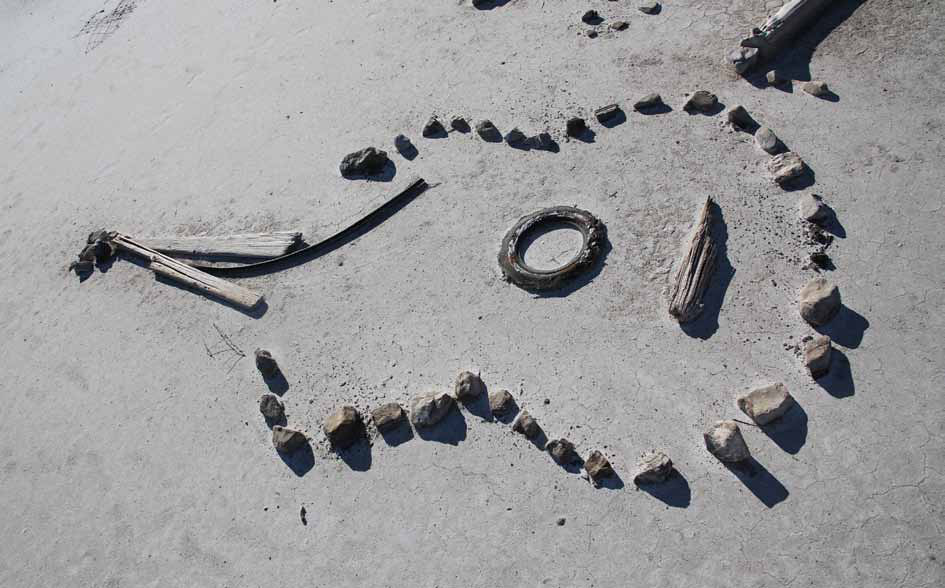 Short of car trouble or comfort breaks, there’s no real reason to stop along the nine-hour stretch of US Interstate 80 between the Great Salt Lake and the Sierra Nevada mountains, writes Eric Gillett.

Top: A discarded tire becomes the sound hole of a giant guitar. All photographs by Eric Gillett. 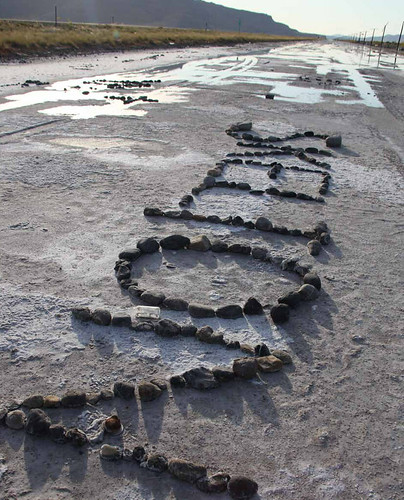 ‘Keep Out’, ‘Do Not Trespass’, ‘Entry Prohibited’ are the messages you read along the route. ‘Believe in the Lord Jesus and You Will be Saved’, ‘Emergency Stopping Only’ and, most ominously, ‘Prison Area, No Hitch Hiking’. 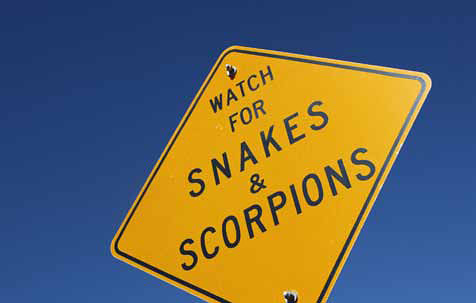 At a rest area near Clive, Utah, a bright yellow sign (above) screams a warning. Yet less than twenty feet beyond the highway embankment, scattered amid the desert’s snake-infested brush, a complex messaging system, complete with its own code of conduct, thrives in the harsh environment. Rich typographic forms and images, constructed from rock and roadside debris, are left along the highway for other passing travellers to discover. 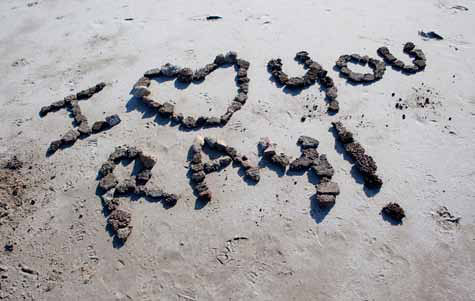 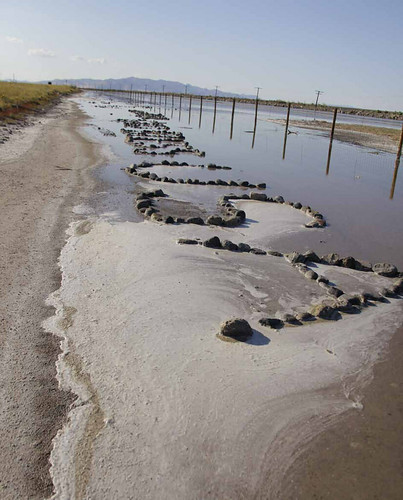 Nineteenth-century wagon trains on this same stretch of the California Trail left messages scrawled on wood, rock, and animal skulls. The 21st-century equivalents serve a similar purpose. Given the utter lack of other landmarks, travellers feel compelled to declare themselves present as they stop to stretch or change drivers and mark their journey. ‘I Was Here’, ‘Hi’.

Many of the messages can be viewed only stopping on the hard shoulder and climbing down a small embankment. Others are carefully placed on high ground to maximise visibility from the highway. Among the hundreds of messages I found, only a few were facing away from the road. They are easily overlooked, especially while driving at 90 miles an hour. 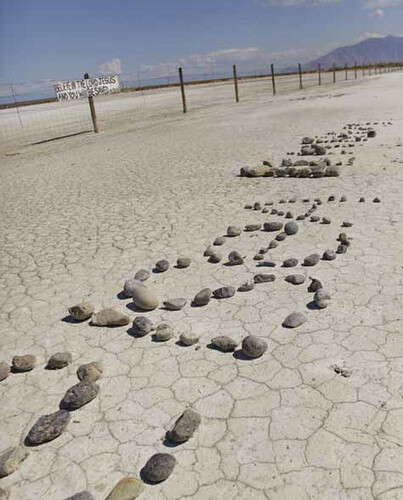 While many of the messages lie along the same shoreline as Robert Smithson’s massive Spiral Jetty, they’re more accessible and certainly more reasonable – no need for earth-movers, bulldozers and desert tour guides here. The works range from a 30ft smiley face to five-inch letters, meticulously constructed from hundreds of tiny pebbles. What they lack in scale or conceptual prowess, average folk have compensated for with practicality, humour and sheer ingenuity. Joe Rocks. 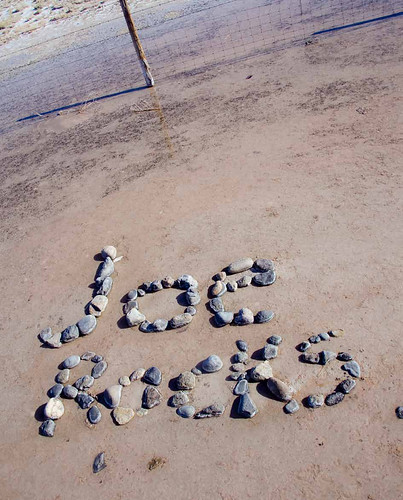 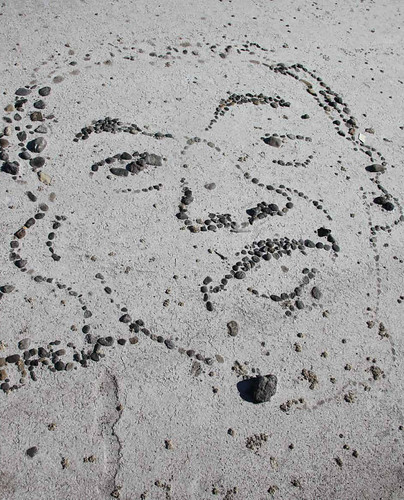 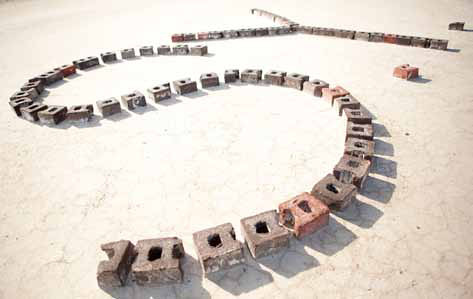 When examining the taxonomy of roadside messages, one category dominates. ‘Shelly + Rick’, ‘I (Heart) U’, ‘Lacey & Trent’, ‘Bruce Loves Sylvia 3-7-96’. The most common symbol in the desert is a heart, followed closely by the + sign in love equations. But displays of affection are the first messages to be desecrated by later travellers rearranging rocks in a harsh desert feedback loop. 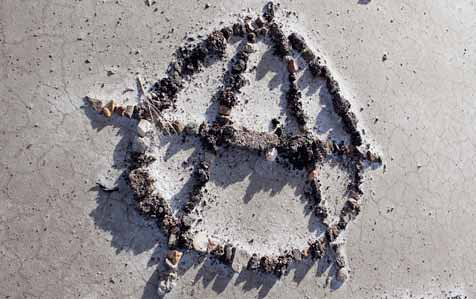 Existential musings are next most popular, followed by Death, Sex, Sports, Rock and Roll, Religion. 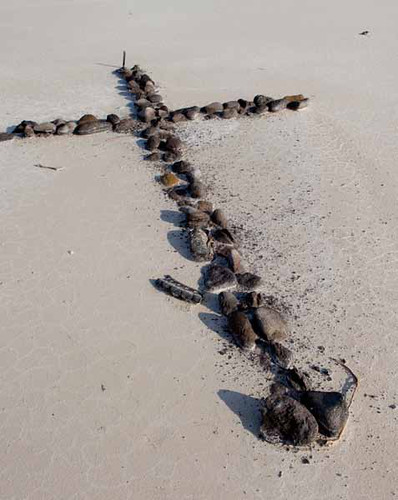 Messages appear in clusters. JESUS (in four foot caps) sits atop a large cross, challenged by a stunning typographic tribute to the Prophet Muhammad, topped by a large smiley face. A nearby Mormon symbol overwhelms them both. Thankfully, the messages are completely devoid of politics, surprisingly free of sarcasm and only occasionally referencing anarchy, satanic worship or the phallus. 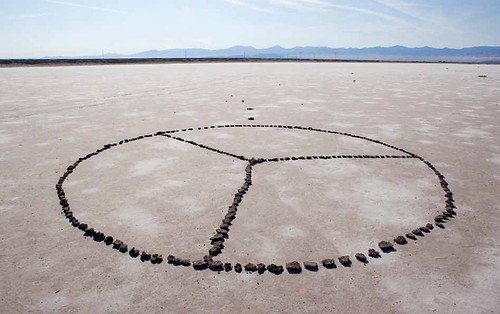 And the more original or elaborate the design, the more respect it is granted. Some messages have remained untouched for over a decade. 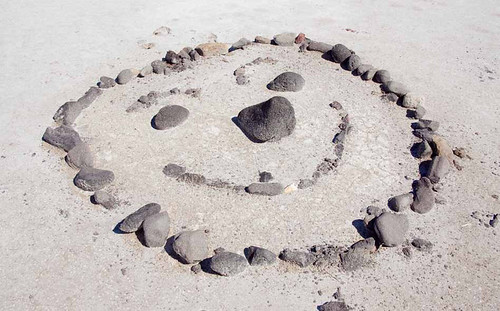