Rhythm & Reaction: The Age of Jazz in Britain 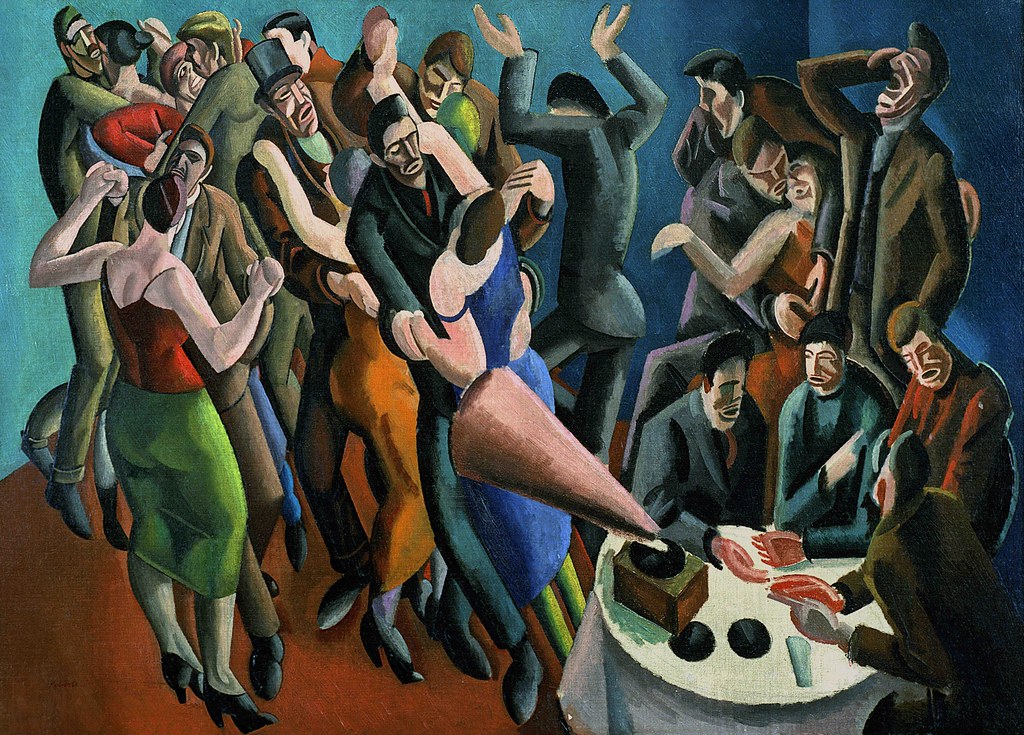 Jazz first came to Britain as a visual and cultural style – rather than as a musical form, writes John L. Walters.

This is a pattern we have seen played out many times, like the US adoption of 1970s UK Punk in the 1980s, and British Mods paying tribute to black American soul and R&B through fashion and style, even when the records were rarely played on the radio.

Many traces of the UK’s early love affair with jazz are collected in ‘Rhythm & Reaction’, an exhibition curated by Catherine Tackley that runs until 18 April 2018 at Two Temple Place, a beguiling building near the London Embankment that is open to the public only three months a year. At the start of the lower gallery we see a few jazz antecedents from before the First World War, such as ragtime and the ‘banjo craze’, but the show gets going properly with paintings by Edward Burra and William Patrick Roberts and a 1919 bronze of dancers by Frank Dobson. 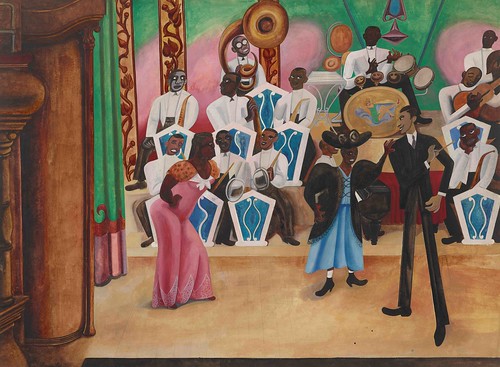 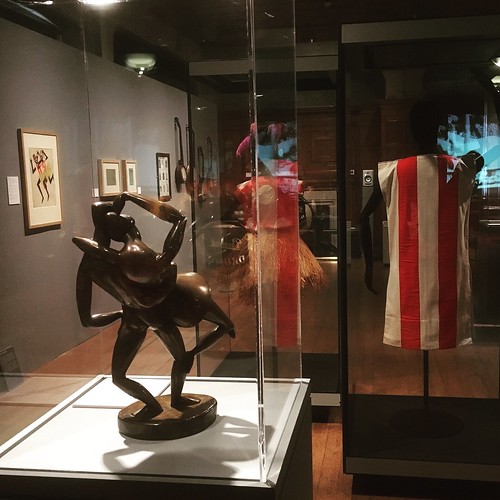 The other rooms take the story of British jazz into the late 1920s and 1930s, including the first visits by genuine ‘jazz royalty’ from the States. There is a photograph in which ‘Duke Ellington and his Famous Orchestra arrive at Southampton Docks’ in June 1933; another photo from the same year shows Louis Armstrong reading the Melody Maker. Another display shows other magazines and books getting to grips with jazz as a musical phenomenon, from Tune Times and Rhythm Magazine to 75 Don’ts for Saxophone Players. Several examples of Art Deco patterning complement the angularity of jazz syncopation.

What is now known as the Jazz Age was a loose combination of several elements. The United States had rapid growth, Prohibition, a temporarily booming stock market and a wealth of fabulously talented musicians: King Oliver, Armstrong, Ellington, Bessie Smith, Sydney Bechet and many more. Their music still defines that era. In the UK, jazz could only be experienced through occasional visits by US stars, and through records and the wireless – as radio was then known. 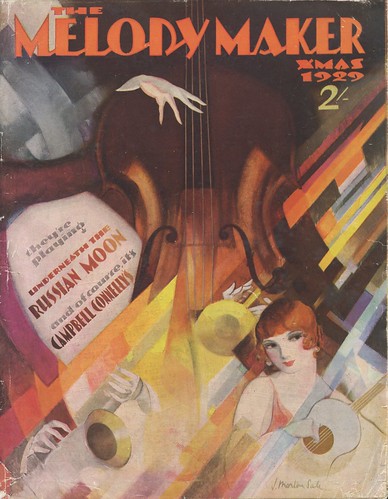 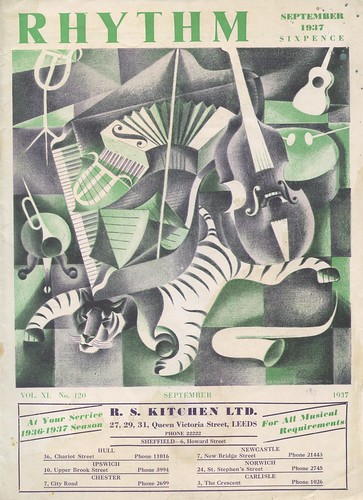 Nevertheless, the culture that sprang up around jazz made an immediate impact, with jazz-influenced dance bands, magazines, ephemera and gramophone records. The discs led to record clubs, in which the revolutionary new music could be heard and debated. In Britain and the rest of Europe, jazz was quickly understood as both entertainment and artform.

‘Rhythm & Reaction’ extends the influence of jazz beyond music by including fabric design, ceramics and other decorative arts. Even though the time was marked by strikes, a financial crash and the rise of Fascism, it was a period of comparative calm between two devastating wars, accompanied by swinging jazz that soundtracked the dawn of popular Modernism.

The Breakdown (ca. 1926), a remarkable painting by Scottish artist John Bulloch Souter, dominates the final room of ‘Rhythm & Reaction’. But it’s the story of the painting – unfortunately we can’t see the original since the controversy surrounding it (fuelled by objections from the Colonial Office) prompted Souter to destroy the work soon after it was shown at the Royal Academy. He painted a smaller version nearly four decades later, and that’s what we see, alongside a monochrome photo of the original, and a chalk study on brown paper.

Installation image of John Bulloch Souter, The Breakdown, his 1962 copy (at smaller scale) of the destroyed 1920s original. 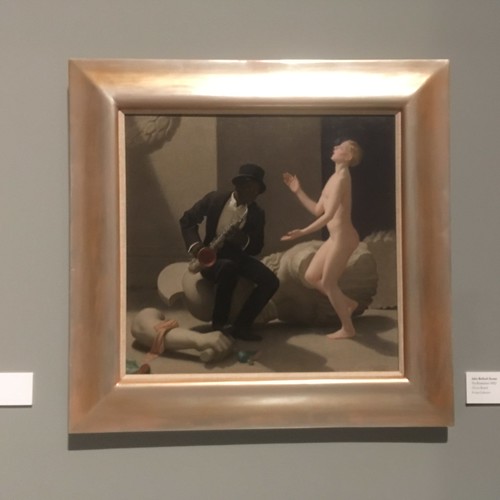 The painting showed a black saxophonist seated on a broken statue of Minerva, goddess of warfare and wisdom. The musician seems oblivious to the presence – on the right of the picture – of a naked woman dancing ecstatically to his music. The Breakdown of title appears to refer to the jazz convention of ‘breaking’ the rhythm section so that a musician can perform solo for a few bars; it’s a device you hear in Louis Armstrong’s ‘West End Blues’, and Duke Ellington’s ‘Harlem Air Shaft’, a time-honoured way of ramping up the excitement of a jazz performance.

Tackley, the curator, makes a strong case for the role of jazz in ‘influencing changes in British society’, moving to what she terms ‘a more nuanced understanding of and interest in African American and black British culture.’ Since jazz is often perceived as too marginal and esoteric to bear such sociological claims, this is a provocative opinion.

Bulloch’s enigmatic duo of self-absorbed, challenging soloists hints at a world that is far from the razzmatazz of novelty drum solos, ‘jazzy’ teacups or dancing shoes. In its unsettling, dreamy ambiguity, The Breakdown anticipates the British jazz of generations yet to come, from Joe Harriot and Neil Ardley in the 1960s, through Loose Tubes and the Jazz Warriors in the 1980s to current stars such as Dinosaur and Sons of Kemet. 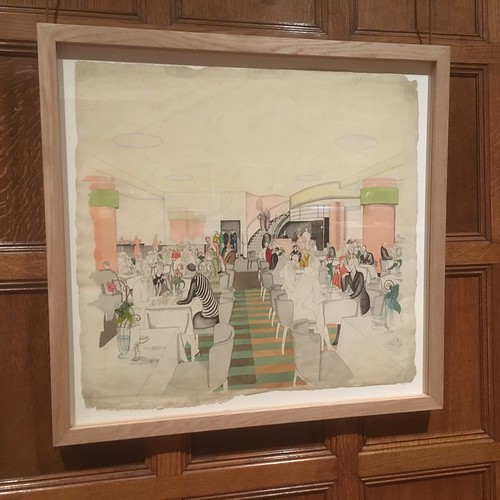 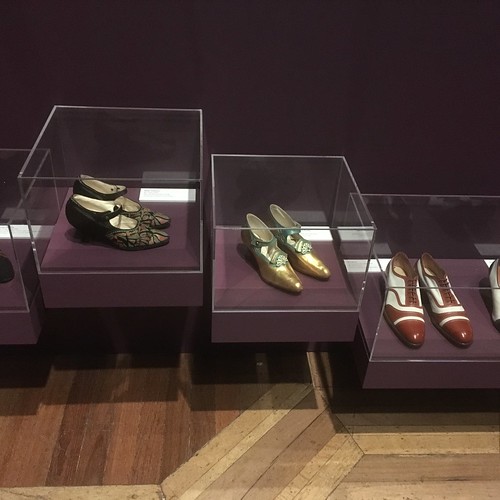 ‘Rhythm and Reaction: The Age of Jazz in Britain’, Two Temple Place