Getting ready for the hyperbolic new Design Museum in Albertopolis. 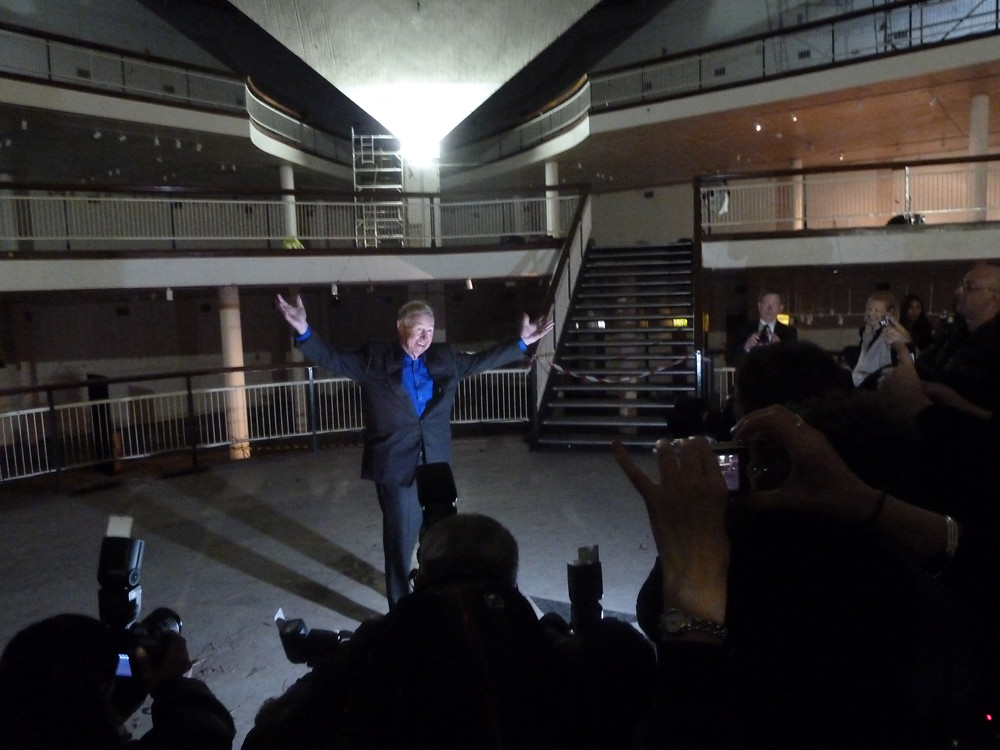 The new Design Museum, slated to open in 2014, is cause for celebration in London’s design community, writes John L. Walters.

And you can forgive its founder Sir Terence Conran a certain amount of triumphalism as he outlined the museum’s origins in the V&A’s Boilerhouse project, more than 30 years ago. At the press launch (at the Kensington Odeon on Tue 24 Jan) he recalled lobbying the V&A’s then director Roy Strong, who ‘huffed and puffed’ and then said ‘you could have the old boilerhouse.’

Top: Sir Terence Conran at the Commonwealth Institute, the site of the new Design Museum.

After 25 shows in five years, the V&A’s curators ejected the design cuckoo in their decorative arts nest. In 1989, the Design Museum set up shop in their Bauhaus-like conversion of an old banana warehouse in Butler’s Wharf (on the then neglected south bank of the Thames near Tower Bridge), its popular, if overflowing current home.

Below: Conran (left) and architect John Pawson at the press launch, 24 Jan 2012. Screen shows a mock-up of the new Design Museum’s exterior. 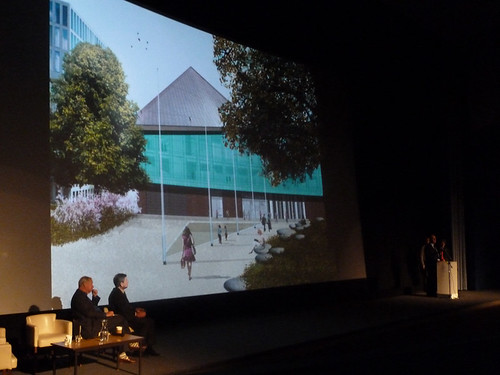 The new incarnation, to be housed under the hyperbolic paraboloid copper roof of the disused Commonwealth Institute, will give the Museum three times the space, and twice the number of visitors, according to Design Museum director Deyan Sudjic. There is also hope that its new location, in the area of London sometimes called Albertopolis will help revive the flagging fortunes of Kensington High St.

‘It still feels very daring,’ said John Pawson, the architect charged with transforming the interior. ‘So it’s more about re-tuning the existing architecture.’

Below: first model of the permanent exhibition by Studio Myerscough. 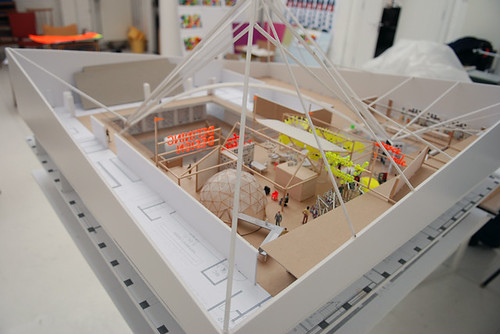 The new museum’s top floor will house the permanent collection, free to all visitors, in an exhibition designed by Studio Myerscough (see profile in Eye 79). The lower floors, including a newly extended basement, will hold the temporary exhibitions, a library, studio and workshop space for school parties, a café and the all-important shop. 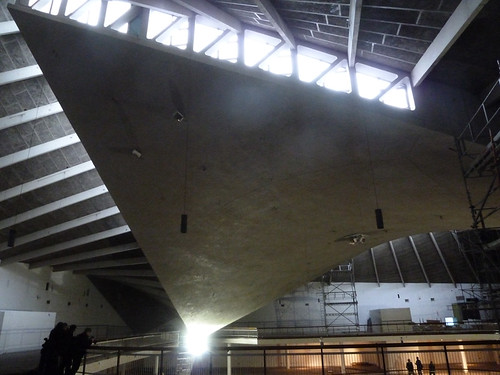 The interior (above and below) of the Commonwealth Institute, unused for more than a decade (apart from the occasional film shoot or fashion event), is still quite awe-inspiring. 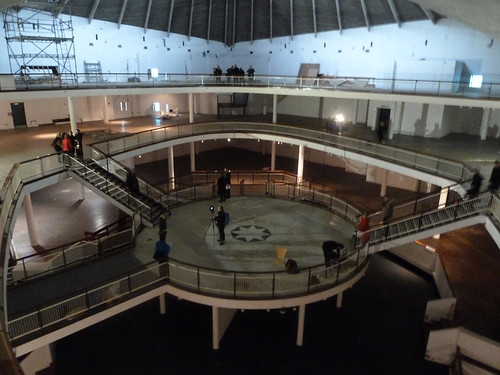 It feels a bit like one of Ken Adam’s film sets for a Kubrick or Bond film. Relics of its institutional past are still installed in the entrance (below). 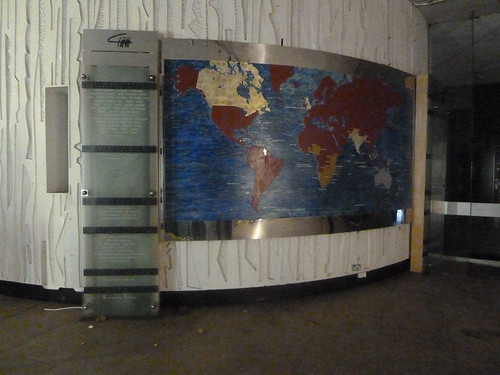 This is reached via a covered walkway through the incomplete, Sylvia Crowe-designed garden. 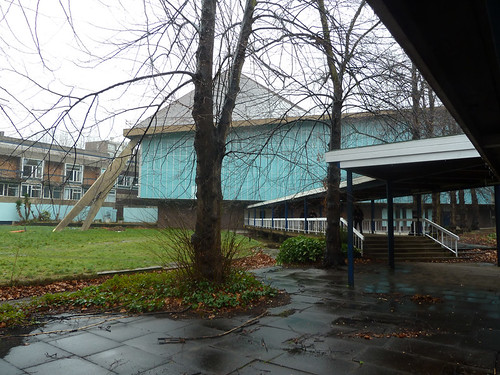 The ‘re-tune’ will involve removing all the existing floors and stairs. However it is good to know that this example of 1960s Modernism (completed by RMJM in 1962) will get another lease of life in the hands of Pawson and OMA (for the surrounding residential development), whose Rainier de Graaf said: ‘Buildings of the 60s are often vilified. We love this era.’ 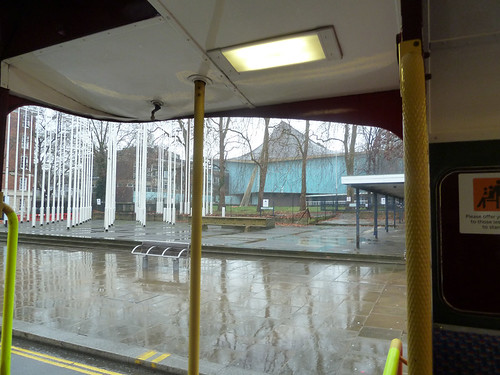 Leaving the press view, I jumped on to a passing Routemaster bus (another mid-century flashback), whose conductor recalled going to Commonwealth-themed parties in the building, and was thrilled to hear about its new incarnation. All that’s needed is another £18m. 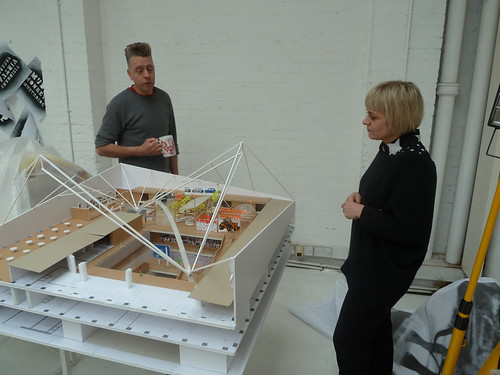 Back in Shoreditch, Morag Myerscough and her partner and frequent collaborator Luke Morgan (above, left) demonstrated the model they had built for the new Museum’s interior.

‘It was a big pitch, up against some impressive agencies, and the tendering process took more than a year,’said Myerscough. ‘We won the job in August and started work in September. There wasn’t a model then, so Luke and I built one.’

She explained that the brief from Design Museum had evolved since their first meetings, and that several elements of the interior, such as the location of stairs, had changed. In contrast to the Commonwealth Institute’s present void, the new museum’s top floor sites new rooms around the periphery: members’ rooms, café / restaurant, activity rooms, etc. The model gives them some idea of the way the swooping roof affects the interior space.

The brief for the permanent collection is complex: the Heritage and Lotteries Fund requires that this part of the museum and its collection to be accessible to the public and free of charge. The route through the building to its site on the top floor means that everyone visiting will get a feel for the whole museum. ‘Visitors will see elements of the permanent collection as they go up from the entrance,’ said Myerscough, ‘and the concept car in the lobby gives you an idea of how much space there is.’ 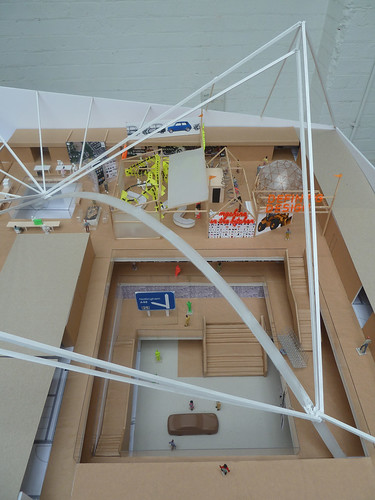 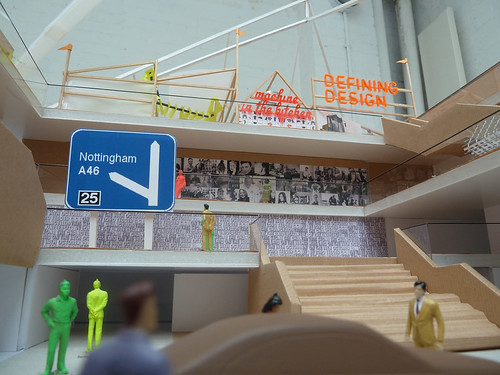 Below: Myerscough making the model. 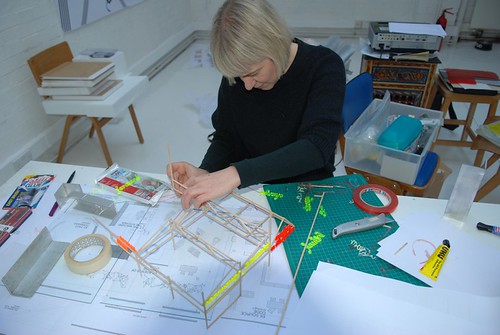 Below: the Design Museum’s short film about the project.

Eye is the world’s most beautiful and collectable graphic design journal, published for professional designers, students and anyone interested in critical, informed writing about graphic design and visual culture. It’s available from all good design bookshops and online at the Eye shop, where you can buy subscriptions, back issues and single copies of the latest issue. Eye 81, has the theme of ‘Designers and clients’; Eye 82 will be on press next week.