What we pretend to be 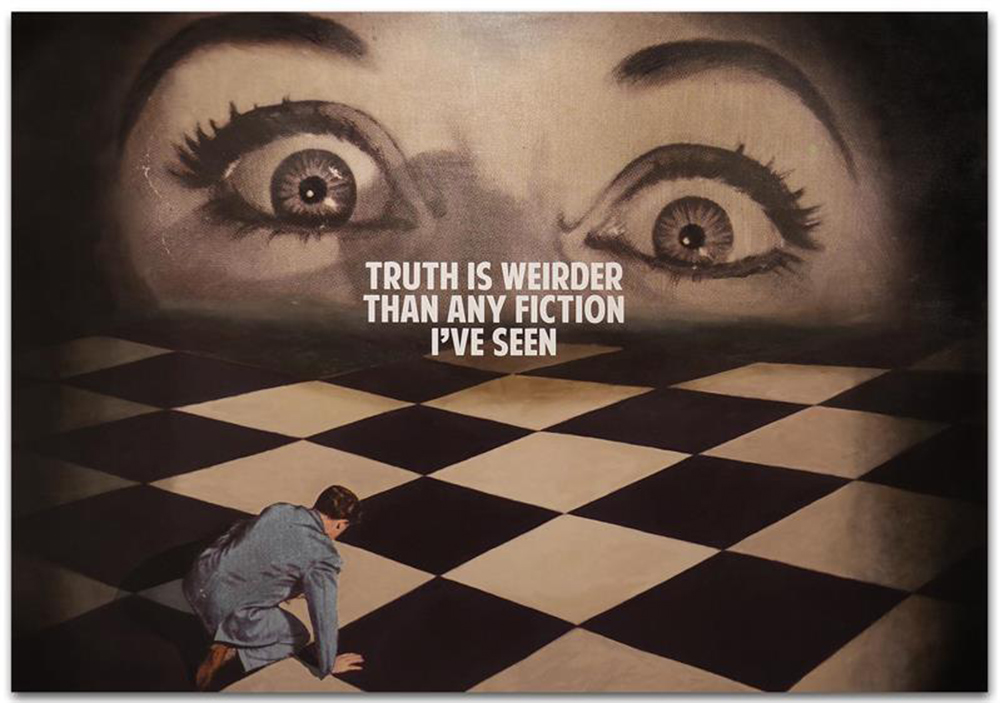 London’s Hang-Up Gallery hosted a launch party on 12 November for an exhibition by The Connor Brothers called ‘So It Goes...’, writes Maggie Malone.

The show follows successful exhibitions in Los Angeles and Sydney. The Connor Brothers were first introduced to the art world as two teenagers (‘Franklyn and Brendan’) who escaped a cult and fled to Brooklyn to begin again, using art to make sense of their new world.

However, this was complete fiction. In reality, The Connor Brothers are neither teenagers nor siblings but two London art dealers: Mike Snelle (founder of Black Rat Projects) and James Golding (co-founder of London gallery, Pertwee Anderson & Gold). A 2014 Telegraph article about the pair can be read here.

A Connor Brother’s piece based on Albert Einstein’s comment: ‘Reality is merely an illusion, albeit a very persistent one.’
Top: ‘Truth is weirder than any fiction I’ve seen ...’ – Hunter S. Thompson during an interview with John Glassie, 2003. 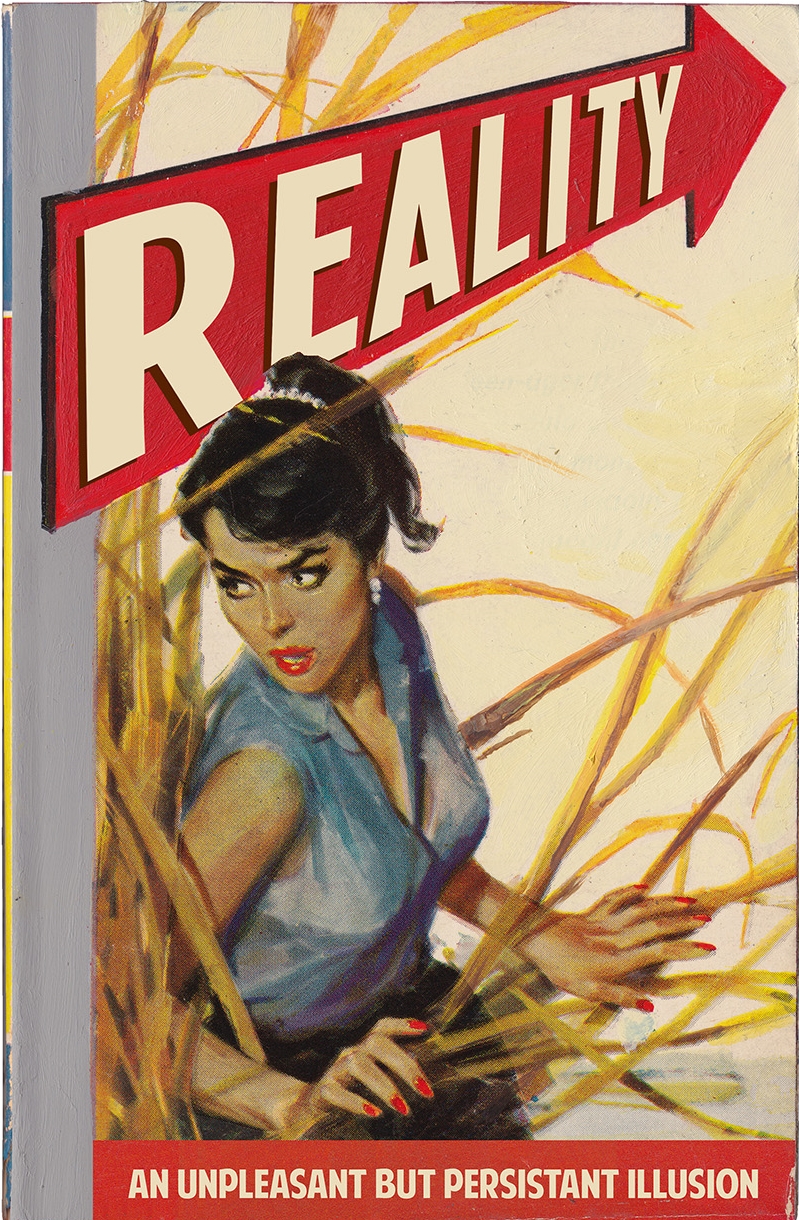 Some works are inspired by early pulp fiction novels. Pictures of people in shock and in anguish grace each of their works, as well as gritty phrases such as, ‘Reality is a lovely place, but I wouldn’t want to live there,’ and ‘Everything was beautiful and nothing hurt’ — lyrics by Owl City and words from author Kurt Vonnegut, respectively.

Each piece is fresh and dark, using visuals and words to force viewers to dig deeper within their own minds to examine and explore their own realities. On display at the exhibition is a collection of pulp paperbacks, the covers repainted and overlaid with lyrics and quotations, along with original canvas works and hand-painted limited edition pieces. 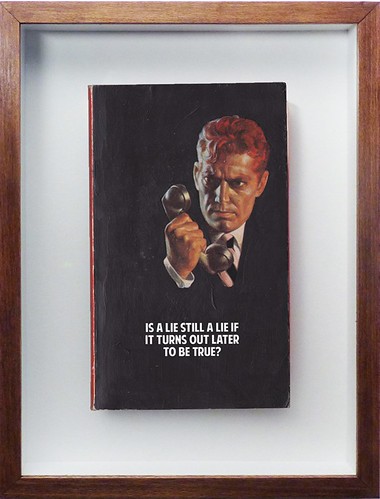 ‘So It Goes …’ is also a show with a cause. The exhibition showcased new work inspired by their experiences in the refugee camp in Calais colloquially known as ‘The Jungle’. These new pieces blend their impressions and observations with fiction, producing thought-provoking and evocative outcomes, to ‘represent the daily sufferings of refugees living in poverty’.

A major collaborator for the event was the Russian activist band Pussy Riot, who recently performed at Banksy’s Dismaland. Mike Snelle first met the group when he and his daughter tried to get into one of their popular talks. Fortunately, they bumped into band member Nadya Toloknonnikova (read her speech at ‘So It Goes …’), who invited them to view the event, leading to their eventual partnership.

Together with Pussy Riot, The Connor Brothers will be returning to the Jungle in December. The funds they raise during the show will go towards clothes and shelters for refugees in an effort to help them survive winter and improve their current living conditions. Snelle has recently written an article about The Jungle refugees’ attempts to find safety in Europe, which can be found here.

The Connor Brothers, Reality Is A Lovely Place, But I Wouldn’t Want To Live There, 2015. The words are lyrics from Owl City’s song ‘The Real World’. 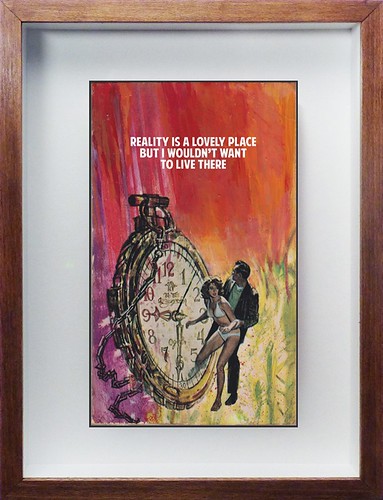 The Connor Brothers, So it goes …, 2015.
A phrase used as a refrain in Kurt Vonnegut's novel Slaughterhouse-Five when death, dying, or references to mortality occur. 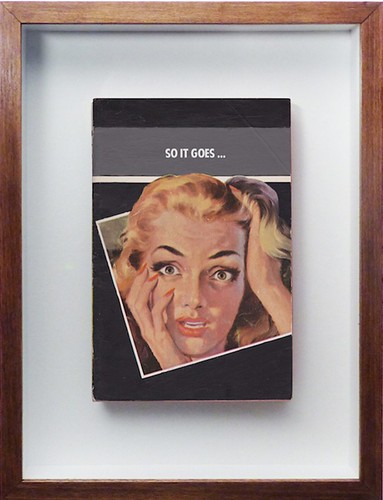 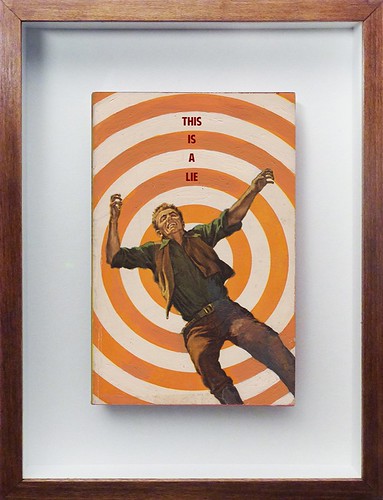 The Connor Brothers
So it Goes…

Free spirit of Victorian photography
What we pretend to be