Astro boy and the sex wars

Curious comics: why the Japanese love their manga Manga are a uniquely Japanese phenomenon and the contemporary expression of a popular visual culture which dates back to twelfth century caricature scrolls. Because written Japanese mixes four different alphabets (kanji, katakana, hiragana and roman) and is allusive rather than descriptive, a mix of words and images has become the favoured form for recreational reading. In 1988, 1.75 billion copies were consumed on the street, in restaurants, on commuter trains, and even in schools, where children are taught to read with manga.

Mangas are printed in four formats: as telephone directory-sized books containing weekly serialisations of stories, and as volumes of complete stories, available either as pocket-sized or standard-sized paperbacks, or as high-quality hardbacks. The range of content points to the diversity of the audience: financial news for businessmen, cookery for housewives, love stories, war stories, tales from traditional folklore, and hardcore pornography. Manga artists are national celebrities, prolific and well paid. Fans collect every story by their favourite artists, so publishers lure the big names with lucrative contracts. With further income from reissues, merchandising deals and animation rights, some artists make it on to Japan’s list of top earners.

Osamu Tezuka
During a career that spanned 40 years, Tezuka produced 500 stories and a total of 150,000 pages, which sold 100 million copies in paperback. Creator of Astro Boy and founder of Mushi Productions, the animation company that brought manga ‘anime’ to a worldwide TV audience, Tezuka remains the undisputed genius of manga and the only exponent to be honoured with a retrospective exhibition at the National Museum of Modern Art in Tokyo. His epic story The Phoenix was serialised between 1967 and 1988 in three different weekly compilations. The Book of Civil War is the eighth of 11 volumes which investigate the human condition, immortality and spiritual beliefs. Tezuka’s framing techniques are most accurately described as filmic. The viewer’s eye is directed through a narrative that jumps around in time and space, viewpoints shift and sound effects leak into the margins. The resultant dynamic successfully emphasises the act of reading.

Top and right. Spread from ‘Astro boy and the sex wars’ in Eye 5. 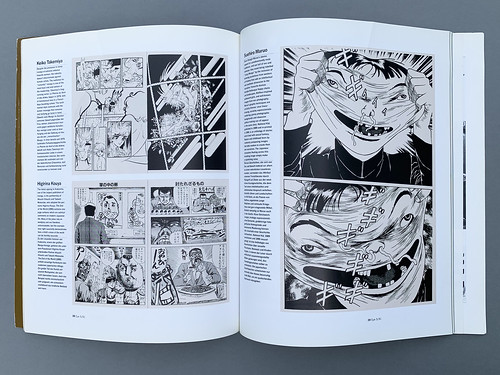 Kazuichi Hanawa
Traditional Japanese folklore and ritual provide the raw material used by Hanawa, who lives on the history-rich and still relatively unindustrialised North island. The Tantrum, from a two-story compilation, Red Sky, published in 1985 and reissued in 1989, is a nostalgic reminiscence of a trip to the acupuncturist by a naughty child and his mother, which provides an opportunity for comment on the definitions of tradition and modernity. Finely rendered rustic Japanese landscapes are invaded by nineteenth-century western technology and peopled with less realistically drawn characters. This discrepancy in technique is intended to provide viewers with enough visual information to enable them to enter the scene and identify with the characters. Sound effects are expertly handled by Hanawa, pushing the narrative along while requiring the minimum of effort from the viewer. Stories like The Tantrum flatter readers with a cosy reminder of Japanese history.

Mitsuhiko Yoshida
A training in print-making and experience as a theatre designer and illustrator have provided Yoshida with an aesthetic influenced by Edo period ukiyo-e prints that makes an effective vehicle for his uncompromising subject matter. Clear, precise, dramatically edited images describe psychologically loaded situations. Two stories from Paper Theatre, published in 1990, reveal a range of narrative techniques that frame stories about sexual awakening and paranoia. The First Visitor describes a young girl’s dream of being pursued by a rampaging phallic symbol, after she draws a picture of a rhino. Her father guesses she is about to have her first period, an event which is celebrated in Japan with a family gathering and the eating of red rice. This frank and sympathetic treatment contrasts with the explicit visual puns, arranged as a series of vignettes, which make up Sex Wars. Yoshida’s stories are designed to appeal to young men and any woman reading them would be considered to be liberal.

Spread from ‘Astro boy and the sex wars’ in Eye 5. 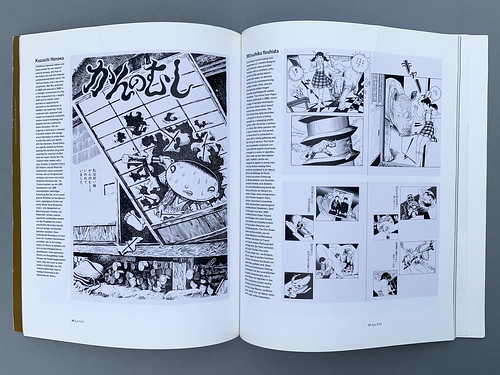 Keiko Takemiya
Despite the presence in many manga of extreme violence towards women, the industry doesn’t discriminate against female artists. The audience for ‘romantic’ manga is one of the most loyal and avid sectors of the readership. Takemiya’s long-running serial, Le Poème du Vent et des Arbres, begun in 1976, tells of homosexual love in a French boys boarding school. The sentimental style contrasts with the darker message that romance and bullying go hand in hand.

Higirina Kouya
The latest signing to Kodansha, one of the largest publishers of manga, is the partnership of Atsushi Kikuchi and Tadashi Watanabe, who adopted the pen name Higirina Kouya. The End of the World (1990) contains one-page cartoons which are satirical comments on modern Japanese life. Many of the jokes rely on wordplay and are therefore untranslatable, but the example near right succinctly demonstrates how a child’s vision of the world can be horribly accurate.

Suehiro Maruo
Even though Maruo’s stories appeal to a predominantly male audience, and are full of sex and violence, they avoid being labelled ‘Juicy Manga’ by the inclusion of knowing quotations from western art history that add an intellectual and aesthetic dimension to the narrative. Favourite devices include Daliesque floppy clocks and landscapes, Balthus-inspired pubescent girls, and well-known images from war photography. Maruo’s graphic techniques are similarly diverse: clear linear drawing, scratchy expressionistic rendering, grainy photographic backgrounds and obsessive pattern-making can all appeart in the same story. National Kid, published in 1989 and re-printed in 1990, is an anthology of stories which deal with sexual fantasy, Nazism and childhood fears by randomly juxtaposing images that defy readers to create their own narrative. The Japanese characters floating across this troubling image simply make a squelching noise.