Getting better all the time…

Self-styled ‘graphic entertainer’ Alan Aldridge shot to fame in the mid-1960s with his work for The Sunday Times magazine, Penguin Books, The Beatles, the Rolling Stones and The Who. Aldridge regards The Beatles Illustrated Lyrics (see Eye no. 57 vol. 15) as an ‘illustration of the 1960s’, and you could say the same for much of his new book The Man with Kaleidoscope Eyes (Thames & Hudson, £24.95), published to coincide with the Design Museum show of the same name. In this extract, Aldridge recounts his experiences after being fired from a job as a junior finished artist at Charlotte Studios – ‘supply your own steel rule and X-Acto knife’ – in a London that was just about to Swing. 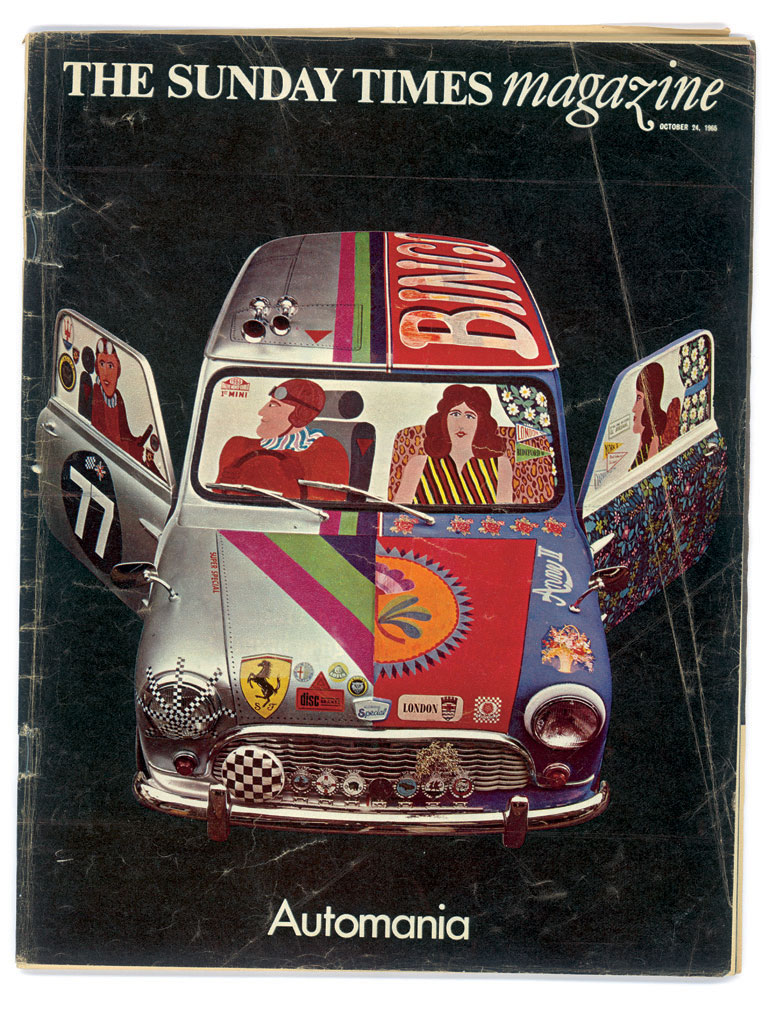 ‘I got a job in a coffee bar, the Nucleus in Covent Garden. It meant late nights – it was a shooting gallery for heroin addicts. After work I’d go to Bunjies, a much gentler place on Litchfield Street. They had a wall covered in flyers. One, headed “Graphic Workshop”, advertised an eight-week evening course taught by Bob Gill, Romek Marber, Tony Palladino, Lou Klein, Robert Brownjohn, Germano Facetti, Marcello Minale and Brian Tattersfield, among others. They were big names in the graphics business, although totally unknown to me. The price was a tenner and here was the clincher – students who couldn’t afford the fee could sit at the back for free, with coffee on the house. I went for the free coffee.

‘The students were all advertising types: grey suits, ties and button-down shirts. The lectures went from the boring, “The need for uniformity and clarity in road signage” to the ultra-boring, “How to integrate serif and sans serif typefaces in educational publications”. Romek Marber waffled on in a thick Polish accent (which few could understand) about the mathematical structure of his design grid for the Penguin crime series. “From Bodoni to Bookman” had F. H. K. (Henri) Henrion in raptures on the history of typefaces. Brownjohn talked in his alcohol-fuelled voice on the advertising masterpieces of Doyle Dane Bernbach; Bob Gill ripped British design to shreds (I did like his work though); Brian Tattersfield eulogised about Swiss design, though I think it’s probably the most overlauded, boring style ever foisted on the British…

‘Alan Aldridge: The Man With Kaleidoscope Eyes’, Aldridge’s first UK retrospective (with complete works, sketches, notes, letters, archival material and films) can be seen at the Design Museum, London, from 10 October 2008 to 25 January 2009