Lessons from an abandoned fish factory 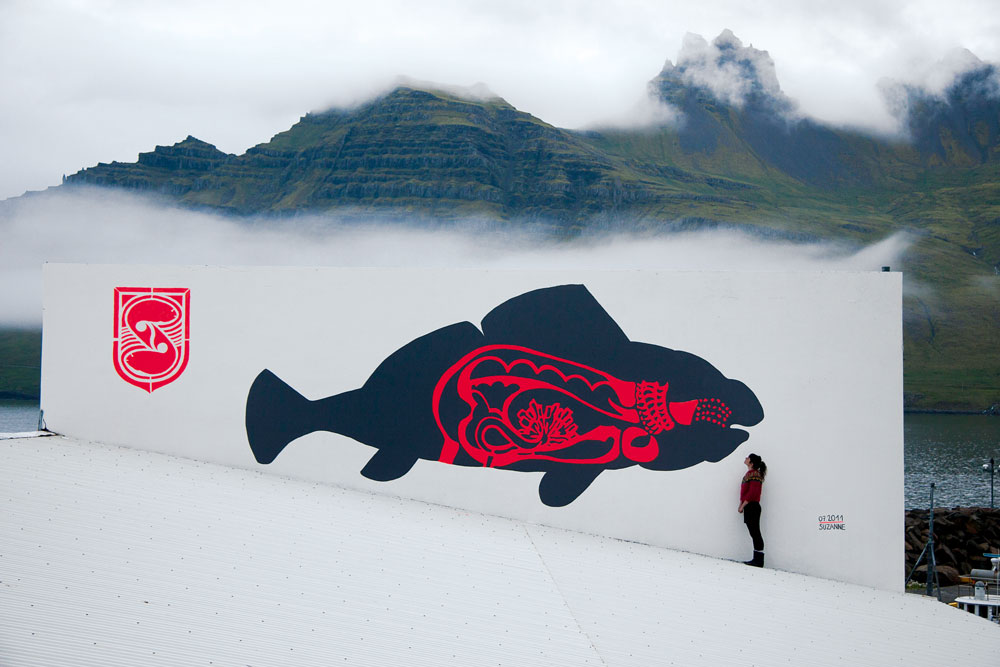 When I invited Rósa Valtingojer and Zdenek Patak from the Icelandic studio Mupimup! – Recycled by Design to come to Central Saint Martins as guest lecturers during our Green Week in February 2011, I little expected that six months later seventeen of us would be heading across Iceland in a bus laden with cameras, notebooks and some heavy-duty av equipment.

Mupimup! is mainly concerned with sustainable design – recycling textiles and reducing industrial waste – but what struck our students was their description of an ambitious new project: to transform one of the country’s many abandoned fish factories into a thriving creative centre, which could function both as a retreat for visiting designers and artists and as a renewed hub of life for Stöðvarfjörður, a remote village with a rapidly shrinking population.

The students on the MA Communication Design course I teach at csm immediately wanted to find some way to collaborate. ‘We talk about it all the time how, as designers, we are capable of more than just making things look nice,’ said one, Cally Gatehouse. ‘So we were really excited to get involved in a project that could put that idea into practice.’

A key to our involvement was that the project was just being hatched. The first phase would be launched in 2011 and completion would not be until 2016. Unlike the usual visiting speaker’s ‘look what I’ve done’, this was a blank canvas inviting us to ask: ‘How could we help? How can we participate?’ (Not, ‘How did you do it? How could we do it?’) Here was potential for a live project with an international design context, reaching well beyond our London base.

There were about 60 students on the course, from a wide range of cultural backgrounds, and about a third of them volunteered to get involved with the Fish Factory project in their spare time.

With help from two tutors (film-maker Victoria Salmon and me) they formed groups to work on different elements: a website, press releases, a conference presentation, a documentary film and a publication. We suggested they record the process through visual diaries that could also be used to promote the project. But we would also have to go out there to do a recce, and find out what local people wanted from them.

London is one of the most design-conscious cities in the world. As a result, designers here tend to assume a higher level of understanding about their practice than actually exists. In a village where design is valued mainly for its application in, say, post-volcano reconstruction, people need to be convinced of the relevance of the communication designer before any collaboration can even begin. The students did this brilliantly, at an impressively professional live presentation that outshone anything I had previously seen them accomplish in college.

Over the four months they spent on the project, all of them learned something about team-working, financial organisation (the trip was mostly self-funded, with bus trips and accommodation subsidised by the Cultural Council of East Iceland), the challenges of professional film-making (invaluable at a time when designers are increasingly being asked to work in many different media), self-publishing and event-organising. Some developed graduation projects, others were able to use the systems they had devised in other contexts, for different countries. One student is working on a self-directed project to revitalise a hotel in her home town of Florence to help prevent its closure. A second (who didn’t join the Iceland team) has gained from his colleagues’ experience for his project aimed at helping the survival of small businesses in Lisbon during the current crisis there.

The students had an opportunity to witness first hand that design can make a decisive change in the world. They could see that their involvement has raised the profile of the Fish Factory project and encouraged local authorities to take it more seriously. It has given Stöðvarfjörður international recognition in advance of the centre’s completion, and thanks to their suggestions, the villagers will be able to develop ways to make furniture from industrial waste.

A primary goal of the MA Communication Design course at CSM is to help bridge the gap between education and the ‘real world’. At a time when students are hitting that world more abruptly than ever, I would argue that it is a matter not just of choice but of responsibility for design courses to welcome and encourage projects like this one. Design must be meaningful.

Top: The fish factory's village-facing roof wall serves as a public gallery space. French artist Suzanne Arhex stands beside her artwork, a heraldic emblem of the time when the factory provided at least 40 jobs for the villagers of Stöðvarfjörður. Photo: Viktor Pétur Hannesson, 2011.