With a substantial body of work already completed, Gerard Unger’s designs are entering a new phase.

In the sometimes narrow brotherhood of type designers, Gerard Unger stands out. As anyone who has heard him talk will testify, he is broad in his cultural references and abreast of new ideas. He also defies easy placement on the map of Dutch graphic design. Now approaching 50, with a string of typefaces behind him, he admits to feeling some distance from the “early work”. It seems that he is just entering the phase of mature production.

As a student of graphic design at the Rietveld Academy in Amsterdam, Unger remembers avoiding the restrictive polarity of the 1960s: either traditional illustrational work, or the modern tradition of functional thinking and sanserif only. Instead, characteristically, he moved between two teachers were violently opposed to each other, and tried to get the best from both. After college, he worked for six months at Total Design. Then, in a move which was somewhat against the grain, he sought to gain wider experience (and to learn about the business side of the business), working for an advertising agency in Amsterdam. Later, he combined this work with teaching part-time at the Rietveld Academy, in addition to a two-day-a-week job at the typefoundry of Joh. Enschedé en Zonen, a venerable bearer of tradition in Dutch type design. At Enschedé he was responsible for Markeur, an alphabet devised for a letter-engraving machine – the firm was exploring ways of diversifying out of type production. The letters of Markeur are based on the movements of the engraving tool and the rounded forms it produces. Similar heavy constraints informed the letters that Unger designed about this time for the Amsterdam Metro.

This bargaining with constraints has characterised all of Unger’s work. Each job not only has its own Problematik, a set of technical constraints, but also a series of wider considerations. Here one would consider the “atmosphere” that a particular typeface creates, and, even less tangibly, try to speculate on the possible readership.

In the mid-1970s, Unger’s career as a type designer began to gather pace, through what proved to be a long association with the German manufacturer Dr.-Ing. Rudolf Hell GmbH, a forerunner in the field of digital typesetting, with their Digiset composing machine, including the typefaces Demos, Praxis, Flora, Hollander, Swift and Cyrano. The policy at Hell was to produce the “Rolls-Royce” of typesetters which, through unrivalled technical quality, would virtually sell themselves. The typefaces – also beautifully engineered – went with the machines but were not marketed separately. In fact type-specimens were hardly ever issued. Unger therefore made his own publicity through the press and at conferences. Only recently have these typefaces become easily available, with the advent of an industry-wide computer language (PostScript).

Unger can now look back on Demos, the first of these typefaces done for Hell, with some degree of distance. He explains it as a product of “high-tech” thinking. Unlike the neutrality advocated by the modernism of the 1960s (one thinks of Univers), the forms of these letters take account of and even celebrate their means of production: the relatively coarse raster of cathode-ray tube generation. The result is a tough, perhaps ungainly letter that withstands rough treatment (fast printing on coarse paper). After this came Praxis, a sanserif companion to demos, which followed its forms and proportions, and then Flora – an italic for Praxis – but one with a life of its own.

Unger’s next face, Hollander, may be the only one of his typefaces, so far, without a strict Problematik – beyond the notion of a contemporary typeface that recalls earlier (seventeenth-century) models. As the name suggests, this is his most explicit work within the splendid national tradition of type design. In a variety of interesting and subtle ways, all of Unger’s work can be understood in a specifically Dutch light: a large x-height (relatively short ascenders and descenders), a distinct spaciousness within letters (the “counters”), an interest in upright italic (Flora suddenly seems very Dutch) and, as Unger himself puts it, “clarity, sturdiness, straightforwardness… All this is characteristic of Dutch type design over some 400 years.”

Swift, the typeface that followed, was specifically designed for newspaper type. The motivating concern here was to produce a type which had a definite, even sharp style, but which could still perform well under the heavy demands of rapid and not too careful production. Attempts to raise newspaper faces above a minimum aesthetic level have been made before, as Unger himself showed in a detailed historical article he published in 1981. This was an investigation into the “Experimental no. 233” project, undertaken by W. A. Dwiggins for the American Linotype company in the 1930s. Dwiggins was an unclassifiable modern-traditional free-thinking designer, whose work makes historical space for Unger’s perhaps as much as the more obvious Dutch predecessors.

There have been two typefaces designed with low-resolution laser printers in mind: Amerigo and Oranda. One more typeface has come from Hell – Cyrano, an advertising type – but Unger’s association with the company has tailed off and seems unlikely to be revived.

Gerard Unger’s work is intriguing yet still quite hard to grasp and evaluate. To some extent this is due to the unavailability of his typefaces, following from the élite obscurity of the Digiset machine. We know the typefaces from small specimen settings, and as discussed in a series of articles by Max Caflisch in the German and Swiss trade press, but their potential remains untested. Swift, for example, has so far only been used in the Spanish Heraldo de Aragón and two Dutch papers: Het Parool and Adformatie.

There is also an aesthetic or stylistic dimension to this inscrutability. Unger’s typefaces may have been designed to deal with a variety of specific problems, and yet looking over them, one can detect common themes – and a particular, unaligned and catholic visual sense. Here is a body of work that has tried to meet the conditions of its time, both technological and aesthetic. The clutch of younger type designers in the Netherlands help to illustrate this: their work, with its stricter formal vision, takes advantage of the greater technical possibilities recently available. Unger has lived through the worst years of typesetting technology. Yet he has worked with his eyes firmly on the road ahead, with only occasional backward glances at the metal past.

Unger has nearly completed work on Argo, which was begun while he was still with Hell, although it was later sold to URW in Hamburg. With this latest typeface, Unger is for the first time digitising all the characters himself. So, in effect, he has returned to the old method of cutting letters in their final embodiment, as well as designing their forms. This adds yet another responsibility to a task that is already slow and rather lonely. The process continues to be a shifting, iterative one: moving to and fro between drawing on paper, plotting on a monitor, proof prints, and so on. Here the reactions and criticisms of colleagues play an important role.

Argo has gone through a familiar process of growth. Early drawings showed rather sharp, idiosyncratic letterforms. These were refined into a “well-tempered” sanserif in the manner of Univers or Frutiger, with subtle distributions of thick and thin strokes. The result, Unger realised, was a kind of “souped-up Helvetica”, so now he has been working to recapture the bite of the original concept.

Future projects? For some years there has been intermittent work on a typeface in the “modern” style group, to be called Diderot, as well as an historical revival. With these further typefaces under his belt, Gerard Unger will have contributed to most of the major categories of Western typefaces. Imagining the tradition of letterforms for printing as a rich and complex stew – a dish that will never be completed – then one might see Unger’s constrained yet personal contribution as adding a distinctive, rather sharp flavour. 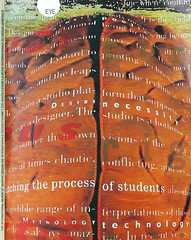 Reputations: Gerard Unger in Eye no. 40