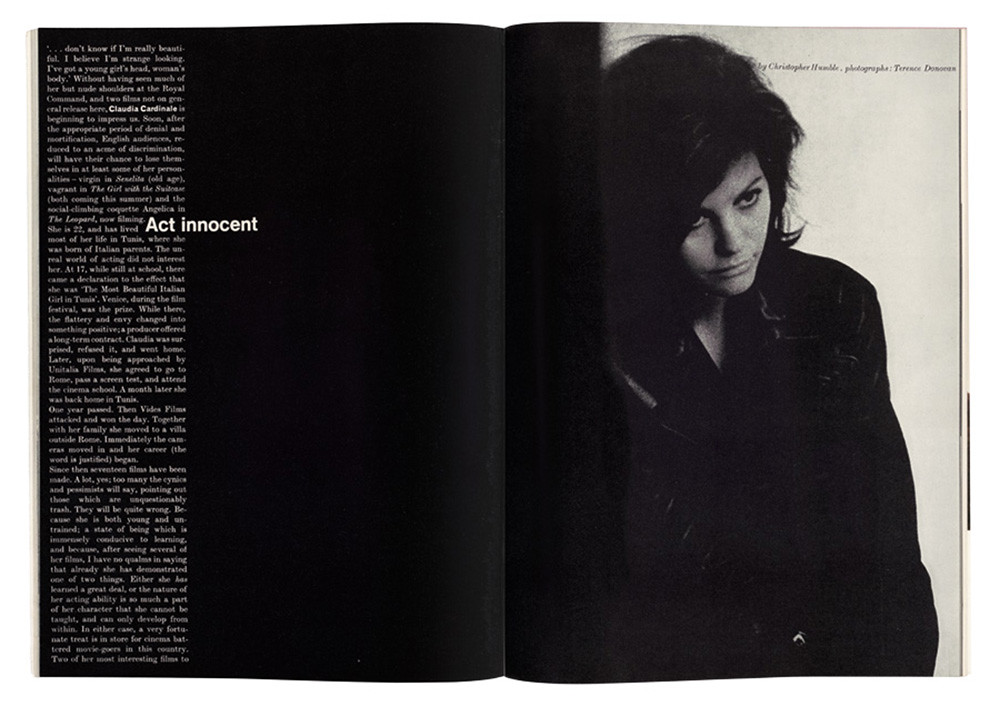 Terence Donovan (1936-1996), the son of a lorry driver, was born in Stepney in London’s East End. Alongside David Bailey and Brian Duffy, he was one of the ‘Terrible Three’ – writer Francis Wyndham’s title for the first of a new generation of young photographers who seized the possibilities brought by the postwar hunger for change They breached social and class barriers and redefined fashion photography and the status of their profession.

Donovan left school aged eleven to join a block-making course at the London School of Engraving and Lithography. At the age of fifteen he discovered photography and changed direction, working as an assistant and eventually opening his own studio in 1959.

The time was right and work flowed in. Wolsey commissioned him for Town in 1960. Donovan cited the art director as ‘unquestionably the first to make me do things and let me appreciate what I was trying to do. He encouraged me enormously. It was Town that really got me started and got me a name.’ Donovan’s mantra ‘the eye that never sleeps’ is a fitting description of his disciplined, highly productive and convivial studio throughout the 1960s. Leading advertising agencies and magazines, including Vogue and Harper’s Bazaar, valued his versatility and he won many awards. David Hillman, art director of Nova, the pioneering women’s magazine, said he prized Donovan’s unfailing ‘eye’ for composition, his meticulous lighting and understanding of the print process, which guaranteed the printed results.

From the 1970s Donovan focused on film, television commercials (more than 3000) and pop videos. Charming and assertive, with a gift for seeing the iconic image, he made outstanding, incisive portraits throughout his career. He knew how to make others feel comfortable; high-profile women sought him out. Donovan captured the key players of the time throughout his career.

He returned to magazines in 1996 with an outstanding GQ portfolio celebrating British pop heroes, published posthumously after his sudden death that year. He left a huge archive, scrupulously maintained by his widow Diana.

Top: June 1962. Photograph: Terence Donovan. This portrait of Claudia Cardinale, coupled with its ambiguous headline, elegantly augments the Italian film star’s reputation as the embodiment of postwar European glamour and sex. Wolsey and Donovan have created a refined expression of the rhapsodies of postwar film aficionados.