Vision of a future that never was 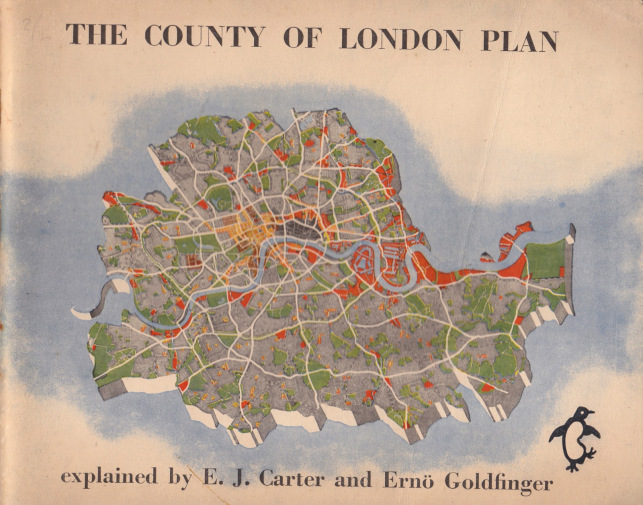 This small publication, published by Penguin in 1945, is a pocket version of the 1941 County of London Plan. The original plan was commissioned by the London County Council (LCC) from Mr J. H. Forshaw (LCC Architect) & Patrick Abercrombie (Professor of Planning at University College London) on the instructions of the then Minster of Works and Planning, Lord Reith. England was at war, with no end in sight, but there was sufficient intelligence to realise that a bombed city might offer an opportunity to create ‘. . . order and efficiency and beauty and spaciousness . . .’

The aim of the Penguin edition was to explain the ‘big book’. For this delicate task Penguin commissioned E. J. Carter, librarian at the Royal Institute of British Architects, and Ernö Goldfinger, the Hungarian Marxist architect with the snakeskin shoes, now best remembered for his pioneering Modernist house at Willow Road and his iconic tower block, Trellick Tower, in west London. The Plan is printed on cheap, shiny wartime paper and cost 3 / 6. It includes photographs by Bill Brandt and drawings by Gordon Cullen. A full colour, folded plan of London is pasted into the back cover and there can found a glossary of useful terms such as ‘Architect’ (‘. . . traditionally makes his buildings not merely efficient but also beautiful’), ‘Period Planning’ (‘. . . a “plan” without attention to the process of its achievement is just a “good idea”; period planning is not something extra to “the plan”, it is a fundamental element of the plan itself’), and ‘Civic Centre’ (‘the town centre in which the chief community and public buildings are grouped together in a planned order for the convenience and delight of the people.’) The Penguin logo is in dancing mode on the front cover: heady days indeed.

Beautifully written and slightly patronising – the book appeals to readers to pay attention and think – as this will affect their lives. The authors were clearly proud of the fact that the Plan was being published and not kept secret, and that its ears were open to comment. There is certainly a refreshing faith what planning might achieve: ‘every move in the planning business is to be reckoned in terms of human use, convenience and happiness’, though it is important to remember the appalling squalor of much of prewar London with industry and the railways belching out chemicals, smoke and stink. Much of the emphasis is on public health.

The London County Plan identified four major defects in the capital: traffic congestion, depressed housing, the inadequacy and maldistribution of open spaces and the undesirable jumble of houses and factories. These, together with ‘sprawl and suburbanising’, ‘an absence of coherent architectural treatment of recent building’ and unplanned development of the (then still private) railways, all made for a city in crisis. The LCC planners saw London as a ‘vast and terrific affair, large and largely out of control . . . and only sick, not dead.’ The core of the Plan therefore suggests ways in which each of these could be tackled.

The proposals are radical: big arterial roads to keep the traffic separated and moving, relocating people out into new towns to release more open space, adjusting of densities, applying ‘order’. For us, with hindsight, it is easy to be amazed at the faith in this vision of the ‘ordered’ city – ‘There is a clean and tidy loveliness in a great new road which if we capture it for London will help to make London a city with some of the character of a new and modern metropolis’ – even if we remember the grey, chaotic, frightening and unpredictable environment within which this was written.

And it makes for a convincing read until we are shown what this vision might look like. Photographs of the diagrammatic model makes one grateful that, in the end, financial and legal pressures – and straightforward bungling – prevented the wholesale flattening and ‘ordering’ of Shoreditch, for example. Reading the Plan is a useful reminder of how delicate this kind of thinking is. You miss a couple of factors such as insufficient funds, mass car ownership, human selfishness, China, global warming – and suddenly the vision falls apart. City motorways do not work and are not lovely; bleak unloved ‘open spaces’ do not work; and architects, for many reasons, are rarely able to deliver buildings that are beautiful.

But these ideas underpinned the 1947 Town and Country Planning Act that formed our cities and towns until 1987. Most of the New Towns designed around these principles were and are successful, which suggests that the layering of big visions on to an old, battered, fabric is dangerous: unless you can do it properly the results can be cruel.

The brief for the book was for the thinking, or the ‘science’, behind the ideas to be explained. There are beautiful maps of every sort, and stunning photographs. There are several pictograms showing how calculations are made, for example, for the number of rooms needed per family unit, the space required between different building types, how to project urban densities and the consequences of that, the rate of accidents set against the growth in car ownership. These anticipate the work of Edward Tufte and are far more than charming period pieces. They are layered with subtleties that offer more information as you dig for it, while the main message remains clear. And what makes the maps so beautiful?

They are hand drawn, the colours are delicate and careful, and each has atmosphere of its own. The dark cloud defining London on those showing population growth celebrates the city itself, somehow encouraging the idea that living within its boundaries is a privilege and one that all Londoners should sign up to. Tough, of course, if you are one of the families about to be relocated.