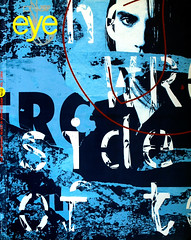 Reputations: Malcolm Garrett
Rick Poynor
‘I figure it’s my job to be this kind of blinkered believer. You know: I am the new futurist, I will live in the technological world.’
Frank Zappa and the Mothers of Invention
Eye writers
The maverick composer’s album covers, by assorted hands, were provocative examples of rock art
P. Scott Makela is wired
Michael Rock
Does Minneapolis-based Makela’s electro-futurism embody the end of the 1980s or a new avant-garde?
We are a camera
Philippe Garner
The Douglas Brothers would much rather see their photographs in a magazine than on a gallery wall
Experiments in publishing
Nick Wadley
Stefan and Franciszka Themerson’s Gaberbocchus Press was founded on the conviction that all the books they conceived together, wrote, designed and published should be “best-lookers.”
The game of art
Koosje Sierman
Graphic design was just one of the tools Karel Teige used to advance his vision of a new Czech society
Small, mobile, intelligent units
Liz Farrelly
Eye talks to young French designers who reject the atelier system and prefer to go it alone
The education of Young Design
Edward McDonald

Graphic Agitation: Social and Political graphics Since the Sixties