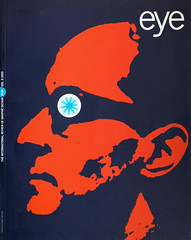 What has writing got to do with design?
Design history, Graphic design, Agenda, Anne Burdick
We canonise the giants of design history as champions of total authorship, while overlooking the obvious message of their work
Whatever became of the content?
Book design, Graphic design, New media, Rick Poynor
Much new design is over-complex and confusing. An alternative current, sharing many of the same assumptions, aims for clarity

Godard: Images, Sounds, Politics.
Eye editors
For the first in a new series, Eye revisits Richard Hollis’s innovatory design for a book on the French film-maker
Reputations: Roman Cieslewicz
Margo Rouard-Snowman
‘Posters are dying out. They need strong themes, which at present they lack. As a form of communication, they belong to another age’
White space black hat
Jeremy Myerson
Derek Birdsall harbours a secret. It has given him 30 years at the top. If it works, he says, use it again
Stop making sense
Véronique Vienne
The best-loved children’s stories are for adults too. Five American illustrators push at the boundaries of the book.
Prints of Islam
Rana Salam
In Syria and Beirut, craftsmen make inexpensive devotional images for the workplace and home
Cult of the ugly
Steven Heller
Designers used to stand for beauty and order. Now beauty is passé and ugliness is smart. How did we get here and is there any way out?
Video to go
Michael Horsham
Video packaging is an area of graphics both marginal and ubiquitous. Who decides how it looks?
Max Bittrof: visual engineer
Friedrich Friedl
Max Bittrof was one of the leading German designers of the 1920s. Unlike many exponents of the New Typography, he was able to apply the aesthetic to a major commercial client