Springtime for Hitler and Lego

A review of ‘Mirroring evil’ at the Jewish Museum, New York

In 1969 the underground cartoonist Yossarian created a comic strip called Funny Nazis that satirised the bizarre attraction among certain American men for the malevolent trappings of Nazism. His sadistically daft SS-Obergruppenführer, who gives ‘hot lead enemas’ to enemies of the Reich, was not torn from the pages of Nuremberg testimony but inspired by covers of 1950s and 60s men’s pulp action magazines with colour illustrations of nasty henchmen debauching defenceless damsels. Despite – or because of – real Nazi crimes these lurid covers titillated readers and kept over a dozen such magazines in print for many years. Yet neither the magazines nor comic strip was in any way a critique of Hitler or the Holocaust, but rather addressed the phenomenon of approach / avoidance voyeurism that many people have had in relation to Nazi perversity. This continual visualisation of Nazism has such irresistible allure that Nazis have become both entertainment and commerce. And this year Nazism has once again taken centre stage as cultural curiosity.

On the pop side, Mel Brooks’ award-winning musical The Producers, replete with riotous Busby Berkeley-like, Swastika-inspired choreography, is playing to full houses on Broadway, while a feature film version of another wartime laugh-riot, Hogan’s Heroes, which ran on TV from 1965-71, is in production. On the art side, Hitler’s publicist Leni Riefenstahl recently had an exhibition at a respectable New York gallery of her 1938 photographs accompanied by continuous screenings of her paean to the master race, Triumph of the Will.

Two other recent exhibits in New York’s Chelsea district showed Nazi-related images, as well. But the most controversial of all the exhibitions is ‘Mirroring Evil: Nazi Imagery/Recent Art’ which opened last March at the Jewish Museum on Fifth Avenue, and is unsettling for what it says about the art world’s current exploitation and devaluation of Nazi-era symbols.

Comprised of conceptual art pieces and installations by thirteen international artists, ‘Mirroring Evil’ invites debate over how artists depict the Nazi legacy now that generations with first- and second-hand memories of the Holocaust are dying off. Does increasing distance from the Holocaust mean that in the future there will be many more trivial interpretations? If ‘Mirroring Evil’ is an indication, the next stage of Holocaust voyeurism is upon us.

When Mel Brooks’ film version of The Producers premiered in 1969, Holocaust scholarship was in its nascence. Brooks’ film was, in fact, a comedic examination of the limits of tasteless humour rather than a dark comedy about the Holocaust (as was Tadeusz Borowski’s wry memoir, This Way for the Gas, Ladies and Gentlemen, about being a kapo – a prisoner ‘foreman’ of a barracks – in Auschwitz). The real audience for The Producers cautiously received it in the same way as the fictional one did in the movie – initially dumbstruck by the farcical ‘Springtime for Hitler’. But after the shock wore off, hilarity prevailed. Some critics questioned whether Hitler and the Nazis should be portrayed so lightheartedly. Others argued that Adolf Hitler had long been the butt of mischievous satires within Germany before the war, and Allied propaganda during the war ridiculed the Führer and his henchmen despite knowledge of Nazi atrocities. The 1942 comedy To Be Or Not To Be, (remade three decades later by Brooks) was one of a handful of movies, including a few by Walt Disney, that made Nazis into moronic buffoons rather than sadistic beasts. Humour can be as powerful a weapon as documentary images.

Horrifying revelations that later emerged made it difficult to take humorous liberties without seeming callous, yet dark and bittersweet humour has nonetheless been a staple of the Nazi / Holocaust narrative. One such was an animated cartoon created in the 1970s by the surrealist Roland Topor about a Polish boy who imagines the mandatory Jewish star he wears is really an American sheriff’s badge and deludes himself into believing he lives in the Wild West rather than the Warsaw ghetto. But Art Spiegelman’s 1986 Maus, the Pulitzer Prize-winning, two-volume comic strip about his parents’ life in Occupied Europe and Auschwitz, demonstrated that wit and humour wed to pathos and drama was an effective lens through which to view the Holocaust experience. Spiegelman certainly gave licence to Roberto Benigni’s less effective, yet Academy Award-winning comedy Life is Beautiful. According to the ‘Mirroring Evil’ catalogue, Maus was an inspiration for the current exhibition.

Yet there are significant differences between Maus and its offspring. Spiegelman fervently rejects the syrupy sentimentality and slapstick humour that gave Life is Beautiful its appeal (he also refused when asked to design the poster for the American release of the movie). But the difference between Maus and ‘Mirroring Evil’ is an issue of how Spiegelman’s art represents reality and the work in the exhibit does not. Maus examines the Holocaust through the words of its direct and indirect victims. Spiegelman tells a ‘survivor’s tale’ from the vantage points of his parents and himself, for he too is a survivor of his father’s guilt and mother’s suicide. Conversely, ‘Mirroring Evil’ is not about the Holocaust at all but uses Nazism as a metaphor for other concerns.

‘My agenda isn’t about making a point about the Holocaust,’ admits Tom Sachs, whose ‘Giftgas Giftset’ and ‘Prada Deathcamp’ (1998) exhibited in ‘Mirroring Evil’ are replete with brand name fashion logos (Prada, Gucci, Chanel, etc). This confusing symbolism is typical of the conceptual ambivalence throughout the exhibit. ‘I don’t think any of the artists in the show are trying to make a point about the Holocaust. We’re mostly in our thirties and forties, and we have a certain distance from those events,’ he adds.

The Jewish Museum was courageous for mounting ‘Mirroring Evil’ since it got heavy flak for its perceived irreverence months before the exhibition even opened. Yet by all indications it was an honest attempt to reconcile contemporary art with Nazi transgressions, just like other attempts, including ‘Anschläge gegen rechte Gewalt,’ a 2001 poster invitational sponsored by Alliance Graphique Internationale, which appropriated
the Swastika in attacks on right-wing extremism. The text of the ‘Mirroring Evil’ catalogue is full of apologies for and explanations of the artists’ motivations (suggesting that artwork does not always speak for itself). Yet the overall result does not live up to the goal that reclamation is admonition. Evil takes a back seat to conceit.

‘We want to get near to the toxin [of Nazism] in order to get as far away as possible,’ states historian Barbara Ehrenreich, quoted in the exhibition catalogue. Although a similar strategy is practiced by African-American artists as a means to neuter racial stereotypes, it fails to work here. ‘Mirroring Evil’ is largely about how young artists have appropriated Nazi stereotypes as the basis for strained irony, or in Sachs’ case, such superficial revelations as the link between fashion and fascism.

Some pieces are more effective than others, but Alan Schechner’s It’s the Real Thing – Self-portrait at Buchenwald (1993), in which he places himself holding a can of Diet Coke in a famous Margaret Burke-White photo of camp survivors, fails to make the desired point. He may want to indict the Coca-Cola Company for possible collaboration with the Nazis in the 1930s (like Ford Motor Co.), and may even attempt to address how ‘removed we have become from the devastation of the Holocaust’. But Schechner’s image reads like a self-indulgent art school project. Similarly, the keynote of the exhibition (at least the piece that has received the most pre-opening publicity), Zbigniew Libera’s LEGO Concentration Camp Set (1996) is a clever transformation of the popular block kit into plastic Auschwitz barracks, crematorium and torture chamber. Yet as ironic as this may be, it has little relation to Holocaust truth. Unless someone offers proof that Lego, like Coke or Ford, supported Hitler’s regime, this is simply a vacuous visual pun that offers even less insight into the process of mass killing than Sach’s fashion and fascism revelation.

Yet just because these are toy parodies does not mean they are a priori ineffectual. A remarkable piece of commentary using similar materials is David Levinthal’s Mein Kampf, which is not in the exhibition. Levinthal’s book, based on an earlier exhibition of large-scale Polaroid photographs of Nazi-era toy soldiers with naked victims in a miniature concentration camp, is more emotionally convincing in its re-creation of events than most of the ‘Mirroring Evil’ exhibits. And I include in this sweeping statement the most amusing of all the installations, Piotr Uklanski’s The Nazis (1998), a wall of actor’s photographs – from Richard Burton to Buster Keaton – who have played Nazis on film. Nonetheless this fails to add much insight to the Holocaust per se, although it does underscore how incredibly ubiquitous Nazism has been in popular culture since the war.

The collected pieces in ‘Mirroring Evil’ seem more concerned with creating spectacle than building awareness. Yossarian’s 1969 Funny Nazis comic strip was a critique of contemporary culture’s fetishisation of Nazi horror. More than three decades later, we would be wise to think about the consequences of equating Nazis with Diet Coke, Prada, and Lego, and worry about whether this is the best way to mirror evil in the future. 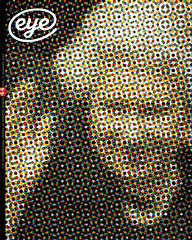