Gag-happy Vaughan Oliver recalls ‘holding a comma on the end of my scalpel.’ Pam Bowman continues her coverage of the Dublin conference. 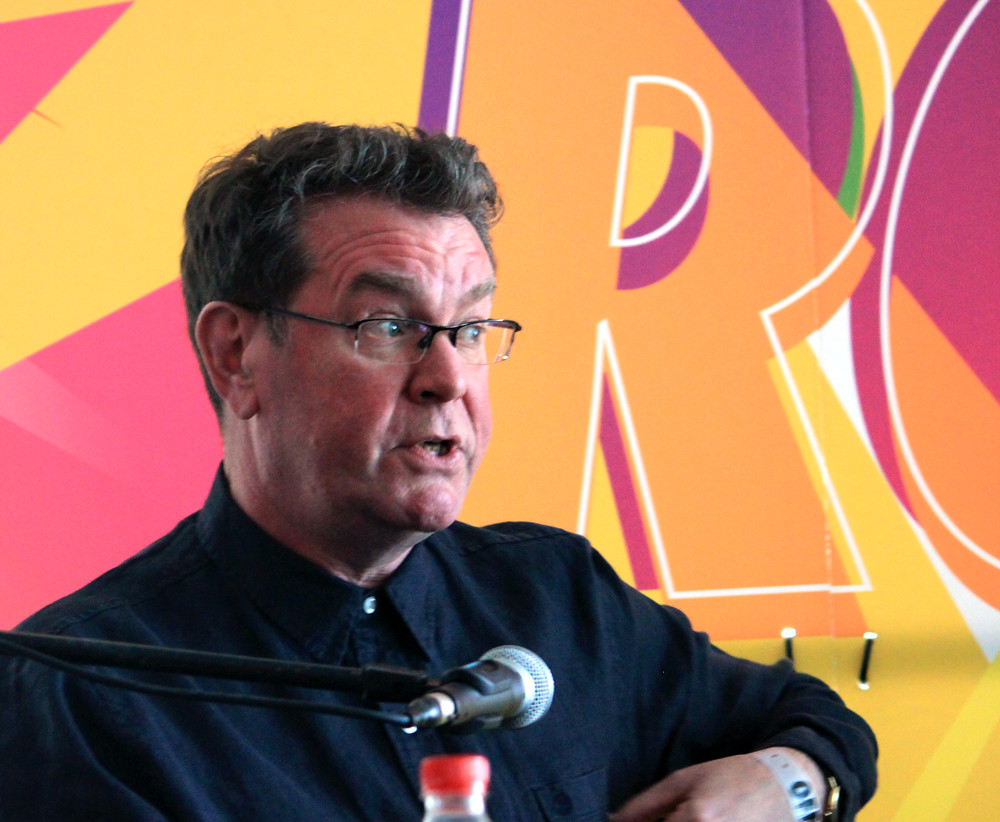 On the main stage Sharkey, who is actively involved in promoting books and reading to children, introduced her working method for creating characters and stories for picturebooks and explained how her technique is adapted for animation. Her 2007 title I’m a Happy Hugglewug (Walker books, £6.99) is being adapted for a series commissioned by Disney and made with Brown Bag Films in Dublin. She creates her characters through her sketchbook ideas, develops them and the stories grow from there. 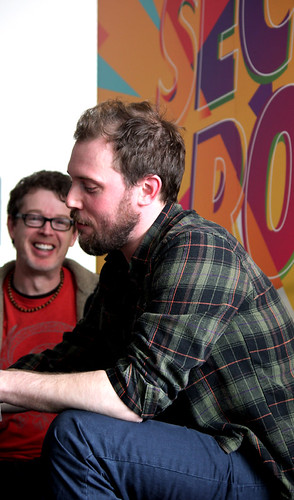 Following on the second stage was a funny and lively chat with Ben Newman and Steve Simpson titled ‘Routes Into Illustration.’ Both established illustrators, they gave honest and direct insights into what happens upon leaving university. On the subject of working for free, both agreed that there is value in projects that are not paid only if exposure comes with it. They talked about their career paths and experiences, as well as the importance of critical advice from tutors while at university and the subsequent development of one’s own critical awareness. 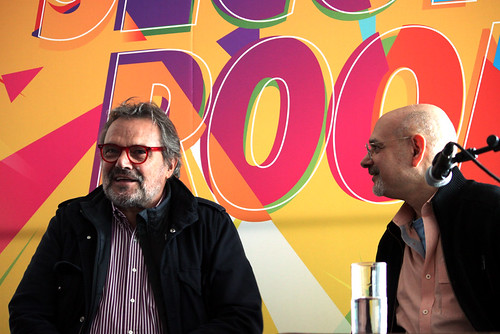 Steven Heller looked somewhat nervous at the prospect of interviewing the exuberant Oliviero Toscani, whom he’d never met before. Toscani (see ‘Offset 2013: day one’) talked about his love of human form: ‘Most interesting to me is the shape of a girl, or a man if it is a man.’

The subject of working with decision-makers came up once more. ‘I have to work with the guy who is responsible!’ said Toscani. He spoke again about his close working relationship with Luciano Benetton and the trust between the two of them. Regarding the controversial HIV campaign for Benetton, Toscani said he was ‘not using AIDS to sell sweaters but using sweaters to sell AIDS. Like using Michaelangelo to sell Christ.’

Toscani talked about his relationship with editor Tibor Kalman (see Reputations in Eye 20), another relation built on admiration and trust. This discussion led on to the topic of Fabrica, the art and design academy.

Ji Lee and the Bubble Project. 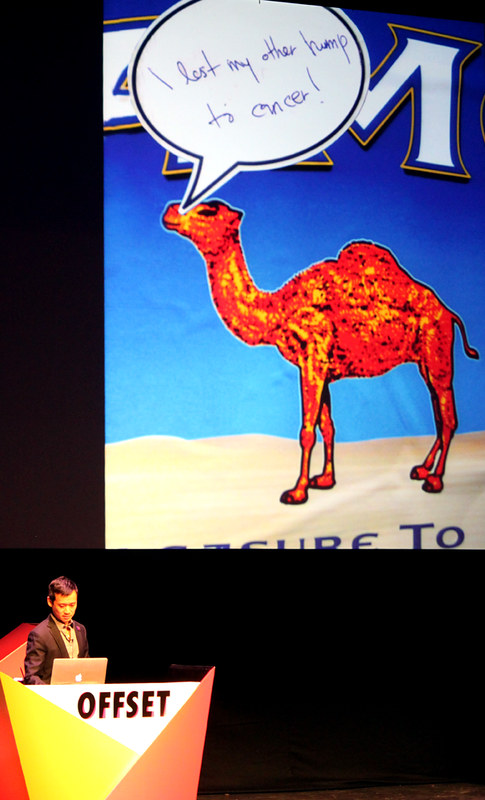 On the main stage Ji Lee (now Facebook’s creative strategist) spoke about why we do what we do – for love or for money – and ‘the amazing power of personal projects.’ Lee worked in advertising and was frustrated by the success of mediocre projects while his work was ignored. In response, he began to work on self-initiated projects that became successful – one example being The Bubble Project (see ‘Part of the process’ in Eye 59 and that issue’s cover).

What he found interesting was that often it exposed ‘the truth behind advertising.’ The project was featured on news programmes and attracted a huge amount of publicity. His ethos is all about producing: ‘I can make anything happen. I can do anything I want. Thank you Internet.’

After a small stage appearance the day before, Louise Fili took the main stage on day two. The images Fili showed were beautifully shot photographs of her work: some flat, some of products, though there was no evidence of her development or working processes. However Fili spoke about the background to the projects and some of the characters she has worked with, problems with production and her meticulous attention to detail resulting in ‘one per cent being creative and 99 per cent making sure the job doesn’t screw up.’

‘This is not art …’ Vaughan Oliver. 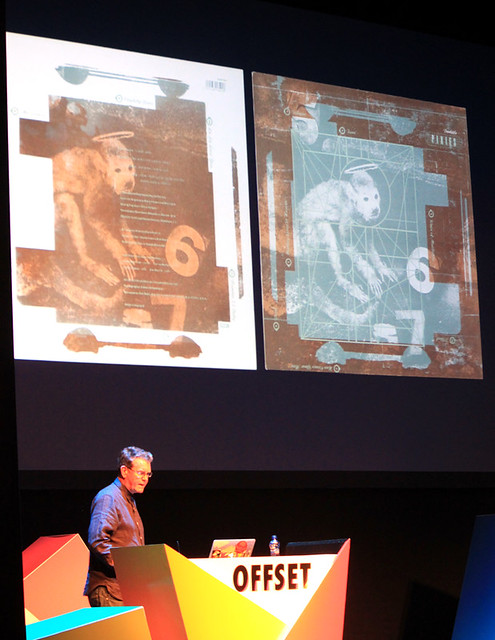 Vaughan Oliver’s presentation on the main stage was a real surprise. Having been an admirer of his work for a long time, I had no idea he would be such a comic performer. He spoke about his background in packaging design at Michael Peters and Partners where ‘typography started to turn me on’ and moved on to the ethos of working with the independent record label 4AD, giving credit to the many photographers he has worked with. He ended on a strong note: ‘This is not art, of course. It’s not fucking art, it’s graphic design!’

‘Holding a comma on the end of my scalpel …’ Vaughan Oliver with Adrian Shaughnessy (right). 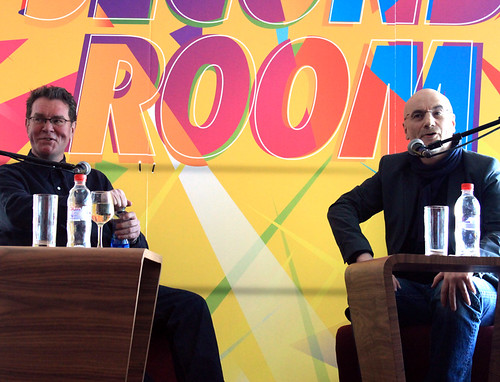 Oliver went directly from his main stage appearance to the second stage for an interview with Adrian Shaughnessy. Shaugnessy’s opening question on football prompted Oliver, a devout Sunderland fan, to say, ‘You can change your wife, your religion, but you can’t change your football team. Paulo Di Canio is testing that!’ Shaughnessy moved on to the rock’n’roll lifestyle and whether Oliver had lived it, to which Oliver replied, ‘Everybody did it in those days, didn’t they? Didn’t we?’

‘I’ve never been one for joining in,' he said. ‘The first time I joined in was with 4AD.’ He spoke fondly about the relationship he had with 4AD co-founder Ivo Watts-Russell.

‘You should have great admiration for people who change your mind,’ Oliver remarked. He also reminisced about paste-ups, working ‘same size’ on a drawing board … and ‘holding a comma on the end of my scalpel.’ Shaughnessy compared Oliver to Eric Morecambe and Vic Reeves, to which Oliver replied: ‘Humour is an important part of my life.’