Out of the Fog and into the Fab 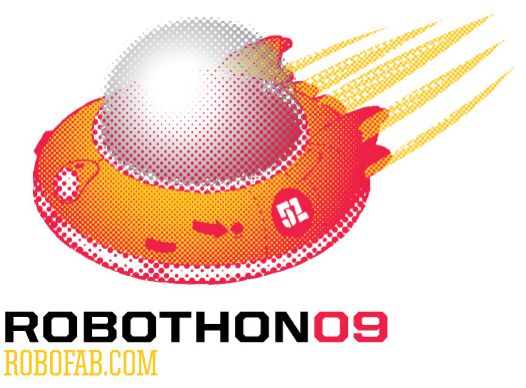 Only a few decades ago, a conference about new developments in typographic technology would have been attended by men in suits and ties discussing hardware with six-digit prices, writes Jan Middendorp. Typefaces back then were expensive, platform-dependent machine parts.

At Robothon, a two-day meeting about the technicalities of type design in The Hague last month, the uniform for both organisers and participants was a black T-shirt printed with a toy flying saucer (in reference to a font file format called UFO), and the speakers presented software that can be downloaded for 99 or 149 euros, or even free.

Many of these avant-gardists of type technology work from a small home office instead of being employed by a big company. The audience consisted mostly of type designers who run a boutique ‘microfoundry’ and sell their fonts (again, at the price of a moderate dinner) through easily accessible Web shops. In the type world, ideas have definitely taken over from the power play of big business. 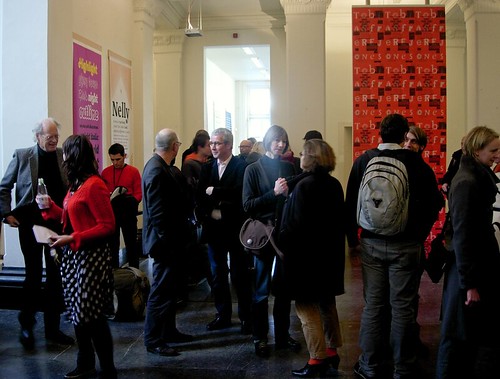 Above: Robothon (or maybe not) crowd – no ties. Photo: Laure Afchain.

Like two of the previous editions, Robothon 2009 was hosted by the Royal Academy of Arts (KABK) in The Hague, a school that has made a reputation as one of the world’s primary pressure cookers for type designing research and education. The KABK is home to Type & Media, a one-year postgraduate course in type design that attracts students from across the world.

Robothon has come a long way since its 1999 first edition. Attending the first Robothon was like being admitted to a secret club. Back then, just over a dozen designers met to discuss RoboFog, a piece of software developed by three KABK graduates, all computer-savvy type designers – Just van Rossum and the brothers Erik and Petr van Blokland.

RoboFog was basically a system for writing scripts to streamline Fontographer, the then-dominant type design application that had been largely abandoned by its owner, Macromedia. RoboFog used a friendly programming language called Python, developed by yet another sibling, Just’s brother Guido van Rossum. There was a rebellious, anarchic aspect to the project.

Centre stage
The situation is completely different today. Python has taken centre stage as a scripting language used by thousands of developers, including mainstream players such as Adobe. The premier font designing software now comes from the Russian-American company FontLab, which has also acquired Fontographer. RoboFog has been followed up by RoboFab, and its developers collaborate closely with FontLab, whose main developer Yuri Yarmola was a speaker at the conference, as was one of Adobe’s type technology specialists.

The new, platform-independent UFO (Unified Font Object) font format, developed by Erik van Blokland and Just van Rossum with like-minded American man of letters Tal Leming, will be built into future versions of FontLab. So what started out as a maverick attempt to tweak an inadequate program has now become a crucial contribution to current type design technology. The number of Robothon delegates has grown from fifteen to more than 100.

The underlying principles have remained the same, however. As outlined by Erik van Blokland in his opening speech, they are simple and pragmatic. Designers should be able to make their own digital tools, because tools influence the design itself. Custom tools can make things easier, and reduce compromises. They may also save time. ‘Solving a problem is nice – once,’ says Van Blokland. ‘Repetition is not.’

Repetition has become quite an issue in type design since the advent of the ‘superfamily’ (see ‘The DNA of ABCs’, Eye 71): extended font systems comprising dozens of related fonts in many widths and weights, with the OpenType system allowing for thousands of characters to be accommodated in one font. Designing and testing every single font by hand has become unfeasible; but automating part of these tasks was what made the superfamily possible in the first place.

Teaching the computer new tricks to take the automation process even further, using more accessible interfaces, is the next step. If Leming, Van Blokland and Van Rossum are right, more and more designers will personalise their software, just like clever craftsmen used to make or adapt their own tools. The UFO format is a crucial element in empowering designers to do this. UFOs are descriptions of fonts (and single glyphs or characters) using human-readable code. Turned into UFOs, glyphs can now be exchanged as text messages in e-mails and even by SMS.

Tools that make tools
Speakers at Robothon presented a broad overview of ways in which home-made software can help control the type designing workflow. Presentations ranged from beginner’s instructions or demonstrations of easy-to-use programs, to complex scripts that made even seasoned type designers gulp.

Among the tools developed by the Robothon crew are Van Blokland’s Superpolator, a tool that facilitates the technique of making intermediate fonts and characters by interpolating between two extremes; Van Rossum’s FontTools, described as a toolbox for making tools; and a series of small programs developed by Leming to automate various aspects of type design and production that he and many of his peers find to be the most cumbersome and boring part of the job.

Standing on the tall shoulders of these three is a younger generation of designers. Former Type]Media student Frederik Berlaen from Belgium has developed the nifty Typecast, an online tool for controlling the design process.

Last but not least, the delegates from Adobe and FontLab (including Adam Twardoch, down with the flu in Berlin, but beamed in via Skype) presented new and forthcoming developer’s tools, underlining that the formerly marginal Robothon is now where it’s at.

You did not even have to be there to be in the know: the whole event was broadcast via a live internet stream, attracting viewers from across the globe. Video recordings of Robothon lectures can now be viewed online.

See Jan Middendorp’s Education article ‘Is type design teaching losing its soul?’ in Eye no. 71 vol 18. You can read an extract on eyemagazine.com. Jan’s review of Playful Type is on the Eye blog, as is his original report from the Gerrit Noordzij Prize Symposium. 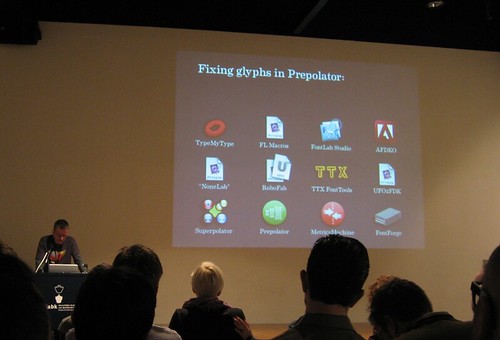