This unusual biography of book designer Helmut Salden (1910-96) shows the processes behind his lettering for dust jackets. By Jan Middendorp 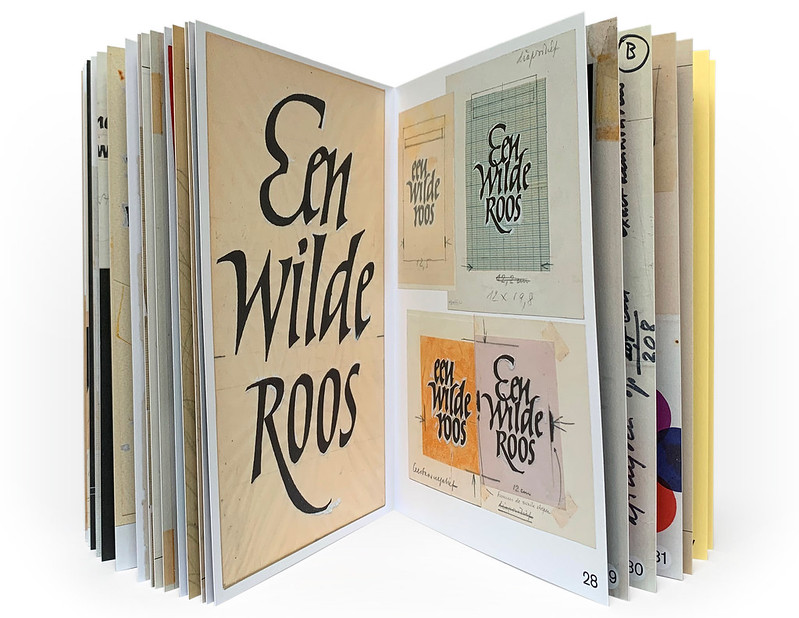 Helmut Salden (1910-96) was the most productive book cover designer in the Netherlands, during the postwar era, writes Jan Middendorp.

Born and educated in Germany, he escaped the Nazi regime in the mid-1930s, ended up in Holland, and began working for a several publishers. After a perilous and traumatic war period, he managed to escape the Nazis again and returned to the Netherlands in 1946. His beautifully hand-drawn and experimentally illustrated book jackets span many genres, making an appearance in the homes of all kinds of readers.

In 2003, 010 Publishers published a biography (Helmut Salden: letterontwerper en boekverzorger) of Salden edited by his widow Katja Vranken. It provided an overview of his work through hundreds of straightforward and often small images. However it did not focus on Salden’s fascinating methods of designing book covers by hand.

Right. Cover of Helmut Salden 1:1 Uncovered. Top. Book interior – each spread is on a separate, continuous leaf of thick paper, glued to the backs of the adjacent leaves of paper. 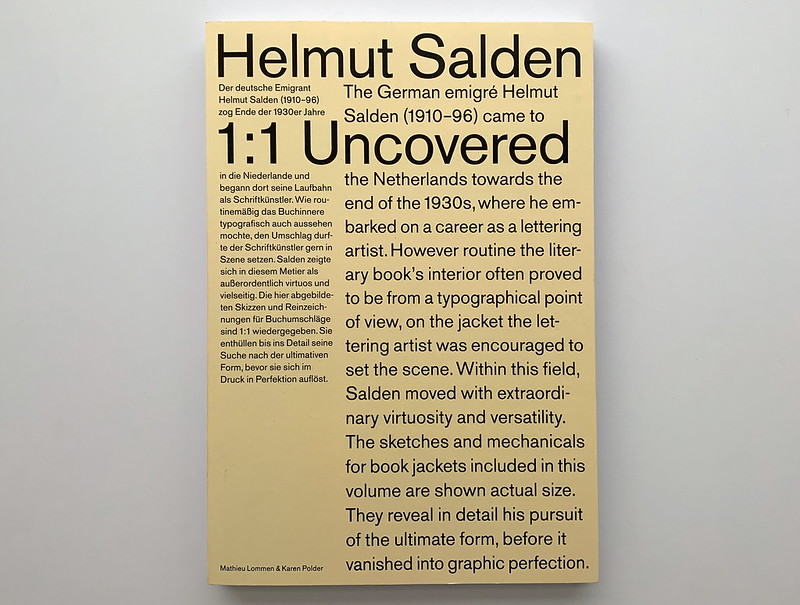 Helmut Salden 1:1 Uncovered. The unique binding is visible on the exposed spine.

The recent book Helmut Salden 1:1 Uncovered provides further, deeper understanding of his work. It is a unique, well made publication, the result of close collaboration between type and lettering specialist Mathieu Lommen (author of The Book of Books, see Ellen Lupton’s review in Eye 84) and graphic designer Karen Polder.

Lommen became friends with Salden in the final decades of the designer’s life. As a result, this short biography, set in English and German across the yellow pages at the front and end of the book, contains a candid and highly informative outline of his life and work. 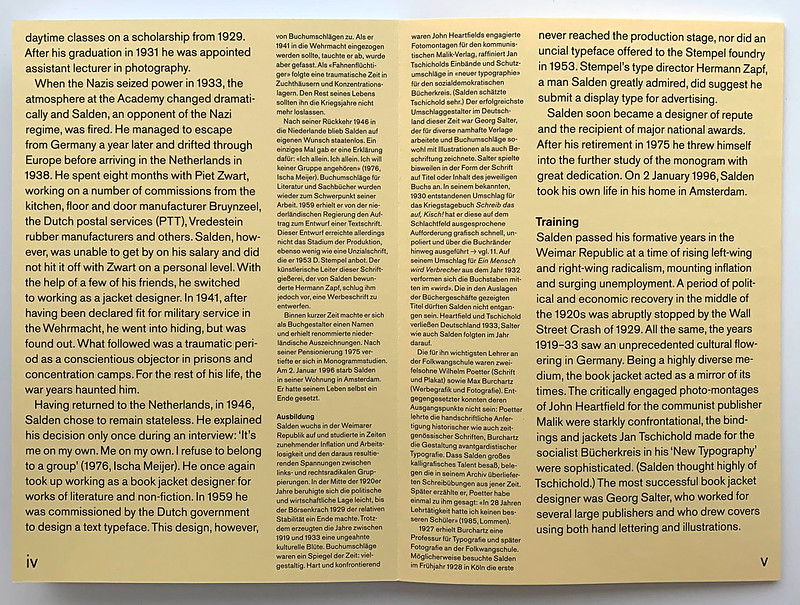 The heart of the book comprises 32 spreads with Salden’s sketches, reproduced ‘same size’, or one-to-one: hence the title. His range of lettering styles was huge – always drawn, never written – and the high image quality gives us a special insight into Salden’s gestures. While calligraphy-like, his lettering was painted in black and meticulously corrected with white ink. 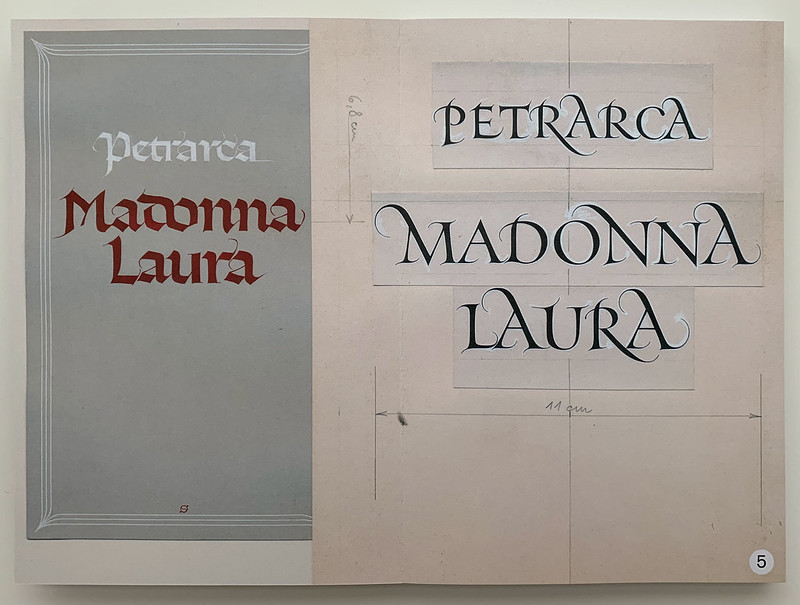 Designs for James Purdy’s Malcolm (1967), as well as unfinished work for books by Aldous Huxley and Ernest Hemingway. 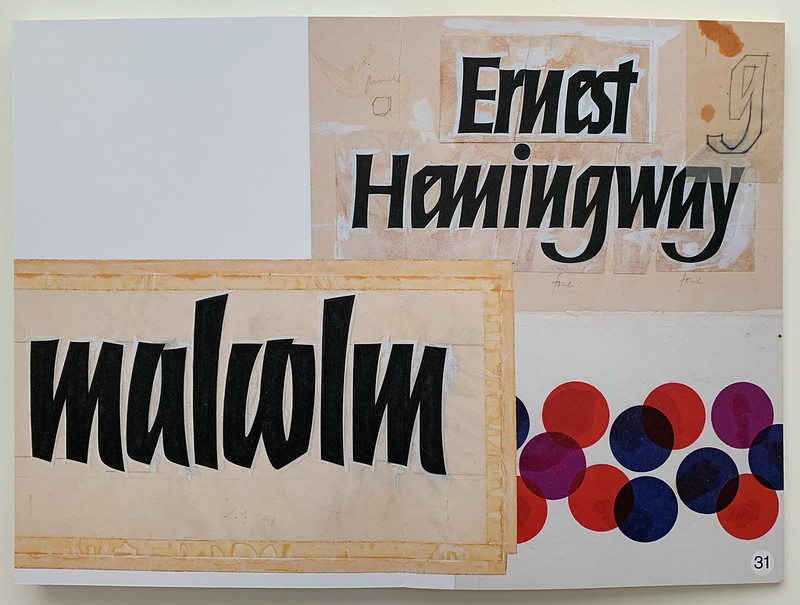 The book has no signatures. Each spread is on a separate, continuous leaf of thick paper folded in the middle, glued to the backs of the previous and next spread. Some double pages focus on one project and the explorative sketches of various solutions; on others a few related projects are overlapped. 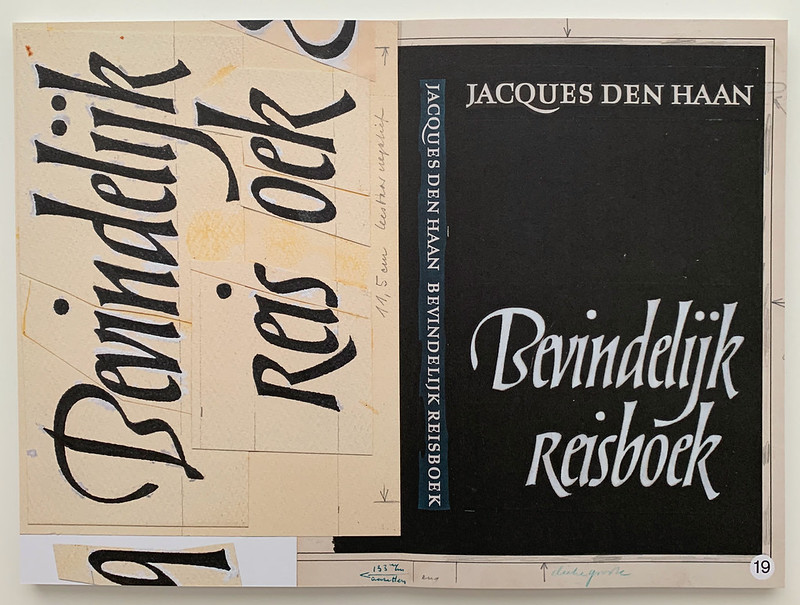 Helmut Salden 1:1 Uncovered presents a distinctive mix of historical research and contemporary design. Limited to 700 general sale copies and 50 special editions, the book pays tribute to the artistry of Salden’s hand-drawn work through tactility, attention to detail and a remarkable means of production. I am not sure if there is any book of this genre that has been produced in the same way.

Book details at karenpolder.nl
In the US, the book is available from Katherine Small Gallery in Somerville, MA
Graphic design and typography at Allard Pierson, where Mathieu Lommen is curator
Ellen Lupton’s review of Lommen’s The Book of Books in Eye 84