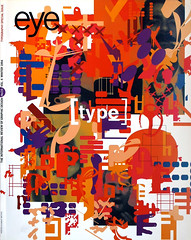 Editorial Eye 15
Graphic design, Editorial, Typography, Rick Poynor
In the three and a half years since Fuse, the interactive type magazine, was started by…
Design is a ghetto
Graphic design, Letter to the editor, Ian Goodyer

Letter from Ian Goodyer in Eye 15

What are we saying?
Graphic design, Letter to the editor, Andrew Howard

The instant, push-button excitements of the digital wonderland blind us to the imaginative challenge…

Ugliness is in the eye of the beholder

One of type design’s young stars talks about his new company and the pressures of early success.

Fuse’s talented team is on an inspired quest to ‘Make it new!’ But what is the project really about?

The producer as author
Will Novosedlik

For Bruce Mau, graphic design is a way of investigating ethical, cultural and philisophical issues

Through its publications and gallery, the Composing Room promoted the new American design