Design city in a hurry

Independence: A History of Graphic Design in Singapore since the 1960s 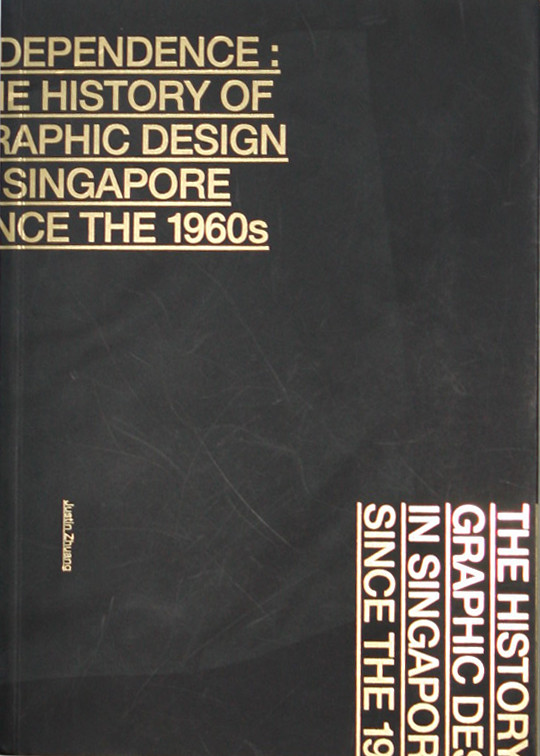 In the introduction to Independence: The History of Graphic Design in Singpore since the 1990s, author Justin Zhuang quotes Deyan Sudjic, ‘design is the language that a society uses to create objects that reflect its purposes and values’, writes Steve Rigley.

As Zhuang moved on to promise that the following pages would chronicle the evolution of graphic design as an independent industry and document the community of practitioners, it was fair to expect the book to be a kind of window into Singaporean society. Yet, those looking for something that might distinguish contemporary Singapore from other global design centres will be disappointed.

In the foreword Theseus Chan suggests that in a ‘blind experiment’ of contemporary works it would be difficult to tell which work had originated from Singapore. The question as to whether this is a cause to celebrate or lament hangs silently over this volume. 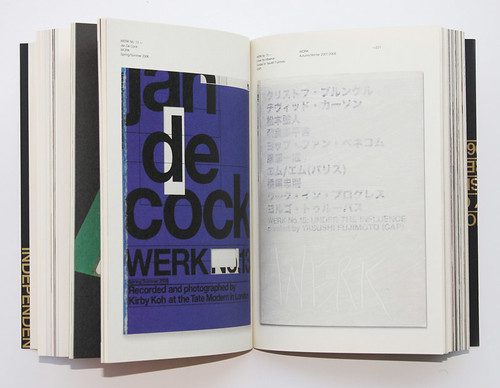 It took two years to produce Independence, which brings together observations, anecdotes and images from more than 100 contributors. For the swelling ranks of Singapore’s design students this should be both a valuable resource and a unique and timely genealogy.

Not surprisingly the story of graphic design runs concurrent with the city-state’s own dramatic narrative. The early years of independence are recalled through the heavy specs of expat ad-men and local commercial artists. A meticulous account of the struggle to break from the clutches of advertising is projected against the expanding backdrop of rapid industrialisation and economic growth. And woven within are details of both successive government initiatives to foster design education, and moves within the profession to build structures of accreditation.

As the story unfolds, the mushrooming of smaller, independent studios – partly in response to economic factors and the emergence of digital technologies – offers a familiar scenario: the birth of a host of single-named studios, that sound like a roll call of 1990s club venues, with attitude. ‘We didn’t give a shit and we could do whatever we wanted!’ boasted Little Ong of Furious, who cites David Carson as a particular influence.

Justin Zhuang’s Independence: The History of Graphic Design in Singapore since the 1960s, featuring an insert Q&A with Allein Moore (the first president of the Designers Association Singapore). 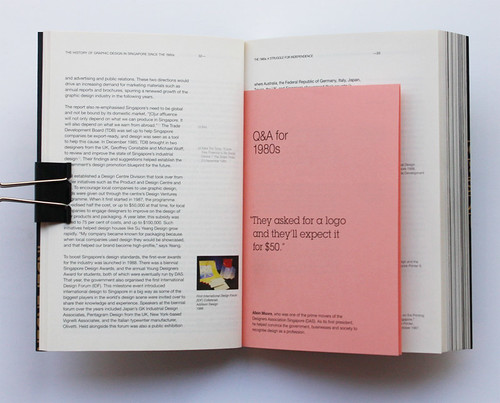 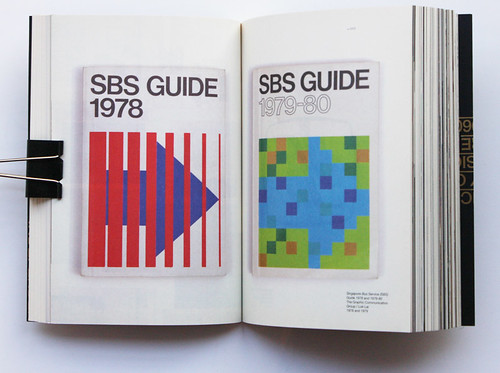 ‘Not giving a shit’ is, of course, de rigueur in certain design circles, providing both a defense from criticism and a reliable post-punk marketing strategy. Yet within this context, it is difficult to tell whether this is merely borrowed rhetoric or whether it is representative of a more significant cultural shift. This is surely the problem with writing a ‘history’ using recent material.

Zhuang made reference to Hugh Aldersley Williams’ observation that an emphasis upon material progress had created a ‘cultural vacuum’ within early 1990s Singapore, which consequently lacked ‘the fundamental spirit of enquiry needed to create good design’. Zhuang also suggests that institutionalised suspicion of the corrosive effects of hippy culture and Western music were factors. However the past two decades have witnessed a more relaxed attitude towards Western music and fashion and the heavy import of MTV with all its associated design-baggage. 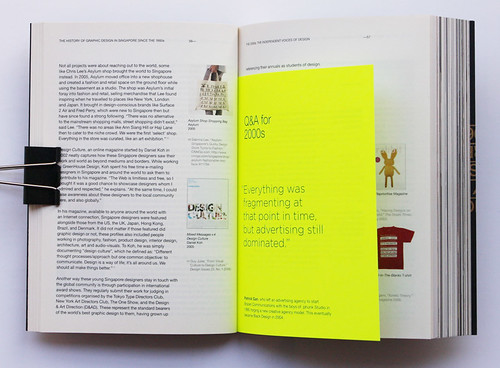 Within this breathless account, the reader is left in no doubt that Singapore is in a hurry. Yet the pace of change seems to have left little time to digest and reflect, and perhaps this is partly responsible for the distinct lack of critical evaluation within the text. The aim for ‘creative excellence’ is routinely stated yet rarely interrogated, deferring judgement to the various kingmakers and prize pushers of the professional dinner circuit. 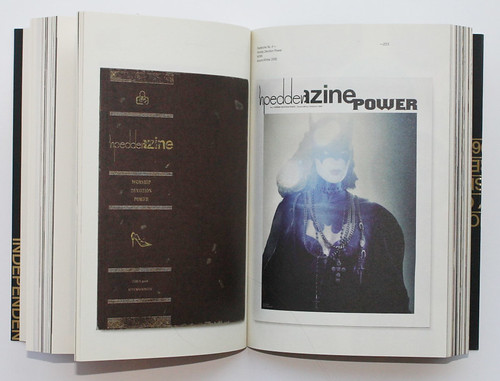 It is doubtful that the book itself would win any awards. The decision to separate the text from the images would be fine if some form of reference or index were provided to link the two. Consequently the 300 unbroken pages of company portfolios offer the critical reward of a long afternoon trawling Tumblr. And no doubt some of the contributors will be disappointed to find their images suffering from the choice of uncoated stock, or tragically sucked into the gutter.

Ultimately Independence confirms that design truly is ‘the language that a society uses to create objects that reflect its purposes and values’. And this may sadden as many as it excites.

Lasalle College of the Arts reivew book, LSD Corporation, 2008 (left) and the cover of Ogilvy & Mather’s The Eternal Pursuit of Unhappiness (right), 2009. 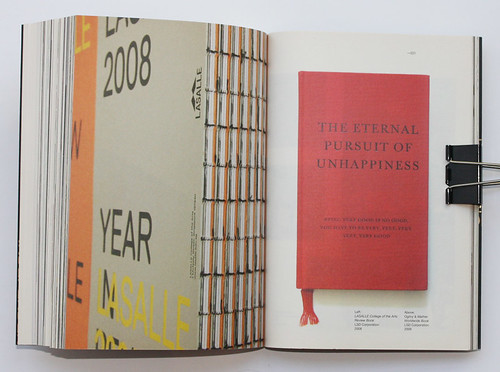 Other Articles By Steve Rigley