Portrait of a revolution 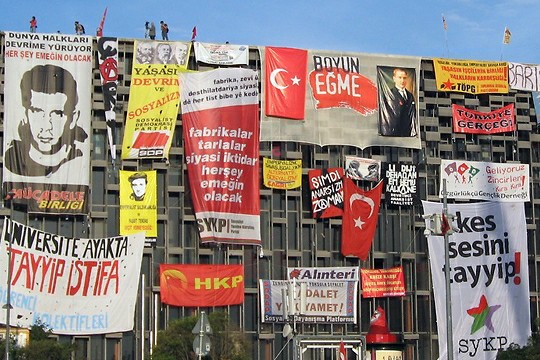 It is a tribute to the Turkish people that they responded to recent events – to violence, to tear gas and to water cannons – with the humorous ridicule that the regime richly deserves.

While Prime Minister Erdogan was mocked and the Turkish media remained silent, the people turned once more to the founder of the Republic of Turkey and father of their freedoms:

‘Oh, child of Turkey’s future, even in these circumstances it is your duty to save Turkey’s independence and the Turkish Republic’, M. K. Atatürk, 1927.

Turkish youth have awakened and responded. The following chronological photo-essay from Istanbul shows how a small protest – to protect a park – swelled into a national uprising against the tyranny of an arrogant government.

Anonymous photograph from Facebook showing the first attacks.
Top: detail from a photograph of Atatürk Cultural Centre (see below). 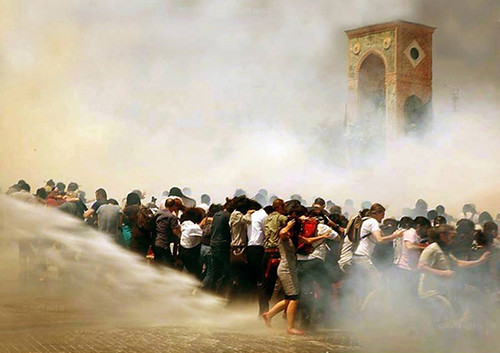 On 1 June 2013, this text was tweeted worldwide in order to call out for help. The media was silenced. CNN Turk broadcast a documentary on penguins as attacks were carried out on unarmed and innocent people. 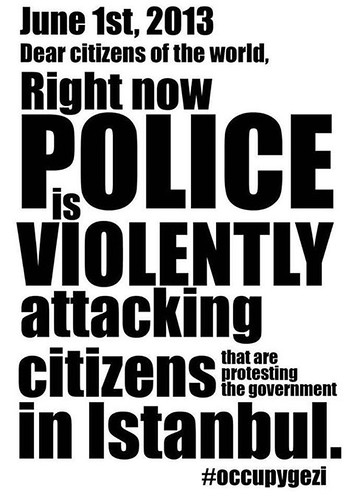 The police fired tear gas, then water cannons, and used their batons to beat protestors: the gas phase, the liquid phase and the solid phase of fascism. 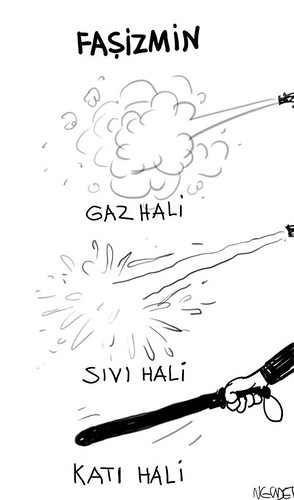 The image of a woman turning from the pepper spray has become the iconic image of Turkey’s protests. Images were widely shared on social media and have inspired cartoons and graffiti across the country and beyond. Photograph by Reuters / Osman Orsal, 28 May 2013, Gezi Park. 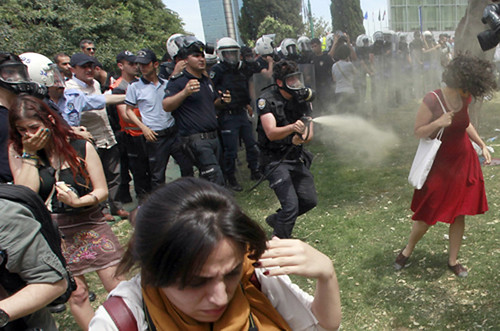 The fictional mafia ‘godfather’ is replaced by Erdogan’s likeness. This poster refers to his alleged manipulation of the media, while his pockets overflow with dollars earned from selling off landmarks to build shopping malls. With yet another mall planned for Gezi Park, and inspired by capitalist Islamic countries such as Saudi Arabia, Erdogan is accused of turning Istanbul into Disneyland. 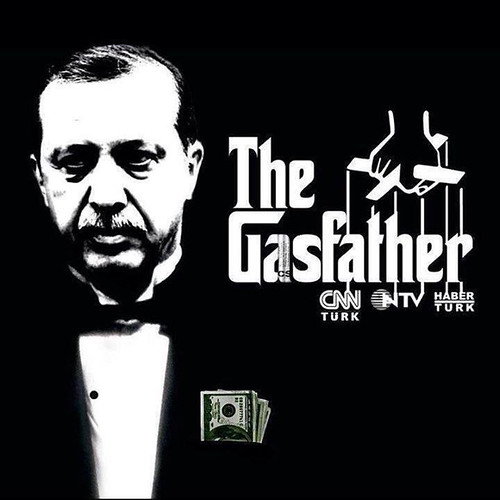 Chapulling is a newly coined word invented when Erdogan used the word çapulcu (looter) to describe the protesters. People on social media sites adapted this word to English and gave it a new meaning: ‘fighting for one’s rights.’ 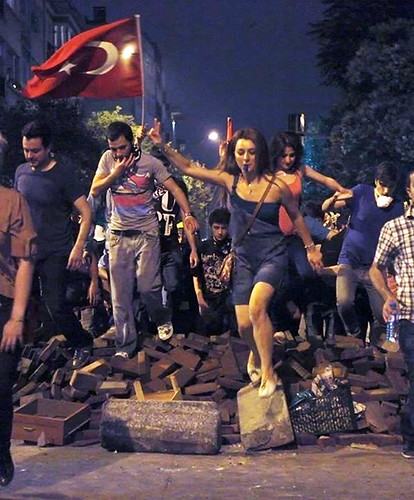 The Turkish Prime Minister said: ‘Now we have a menace called Twitter. To me, social media is the worst menace to society.’ A lawyer who was present at the Gezi Park protests since the beginning said: ‘We use social media because it is the only thing we can use to show people what is really happening.’ 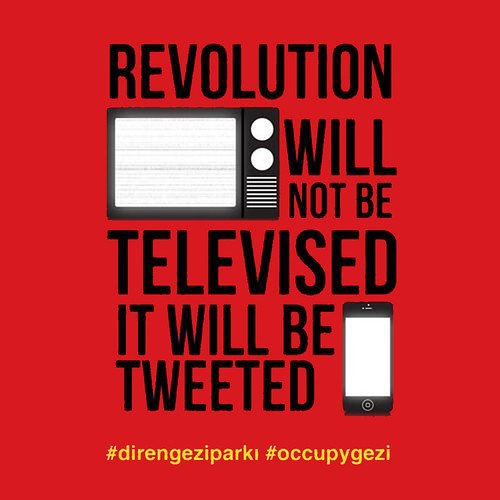 Turkish vernacular language shines through anti-government slogans covering the Atatürk Cultural Centre, announcing a revolution and a breakthrough in communication. 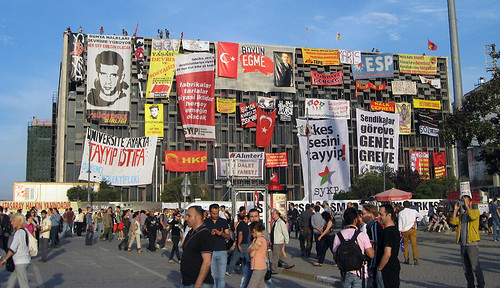 Erdem Gunduz stood in a silent, eight-hour vigil at Taksim Square on 17 June 2013. He inspired hundreds of others to follow his passive resistance all around Turkey and the world, including London followers.

Protestors with their slogans stand by the Republic monument in the middle of Taksim Square. 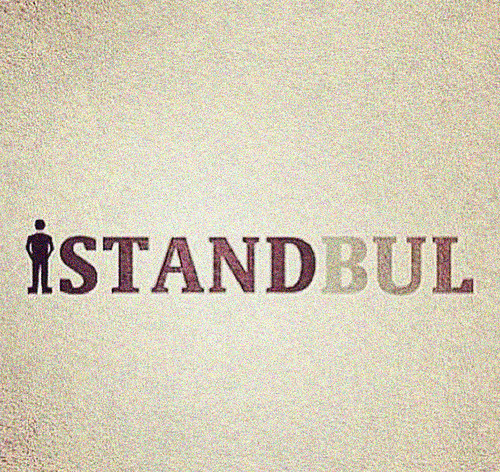 The woman in the dress became a hero during the Gezi Park protests after standing in front of a pressurised water cannon. Kate Mullen said her move was intended to show how the protests were truly peaceful. The image inspired a myriad of posters, this one showing the violent water turning into white doves of peace. The text on reads ‘Oh! Freedom’. 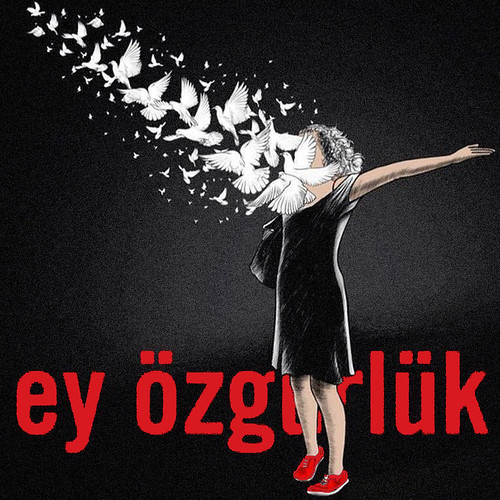 We have endeavoured to find credits and sources for the images shown in this article. If you can help with further information, please email [email protected]

M. K. Atatürk’s address to the youth, 1927
SMaPP: Social Media and Political Participation
‘Why the Turkish protests matter to the west’ in The Guardian
Occupy Gezi Architecture