Pride and posters in Eritrea

The graphic landscape of this East African country reveals decades of colonisation, war and dictatorship. Plus a campaign (in Comic Sans) to promote national pride. Steven McCarthy reports. 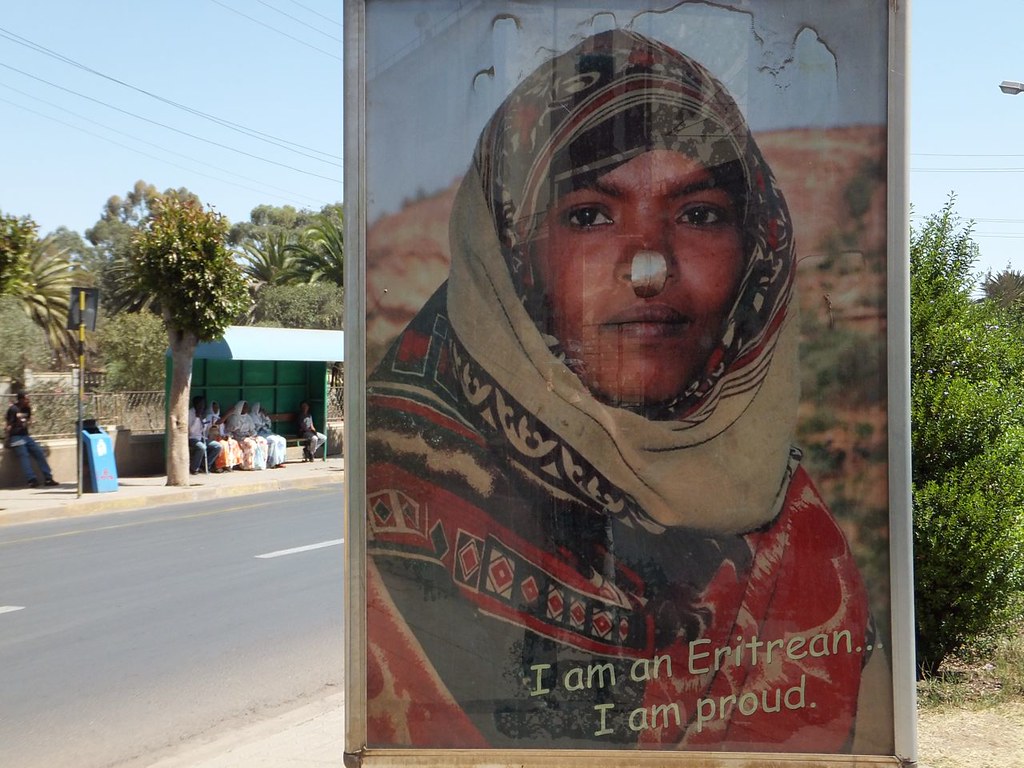 Designers might know of Asmara, Eritrea’s capital in east Africa, as home to some impressive Modernist architecture, writes Steven McCarthy. Eritrea was a former colony of Italy, spent a mid-century decade under British administration, and was eventually ceded to Ethiopia, the latter being under the spheres of influence of the US, and later, the Soviets.

The striking cinemas, government buildings, apartments and the futuristic, airplane-like Fiat Tagliero gas station, while built under Italy’s reign and slowly decaying now, herald a time when other nations could impose their vision and power on weaker and less developed countries with impunity.

Fiat Tagliero petrol station designed by Italian architect Giuseppe Pettazzi, 1938.
Top: ‘I am an Eritrean’ poster in the median of Sematat Avenue, Asmara, with type set in Comic Sans.
All photographs by Steven McCarthy, 2013. 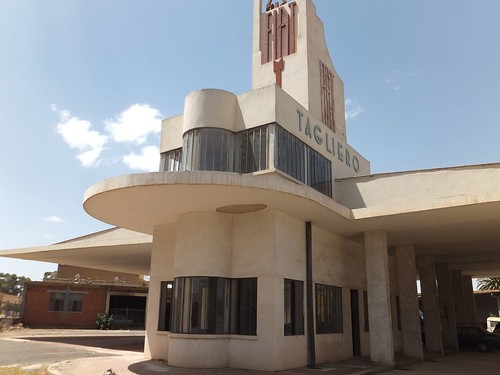 I recently spent a week in Asmara, after 44 years away, to work on a creative research project, which I’ll explain in a later post for the Eye blog. My family lived in Eritrea, then part of Ethiopia, between 1967 and 1969 (I was eight to ten years old at the time) because my father, a civilian school administrator, was posted to the US military base Kagnew Station. I even saw, and my father met, the Ethiopian emperor, Haile Selassie, on a couple of occasions. After Selassie (originally ‘Ras Tafari’) was overthrown in 1974 and the Americans hastily exited, Eritrea was increasingly oppressed by Soviet-armed Ethiopia.

Detail of mixed media artwork from the lobby of Asmara Palace Hotel. 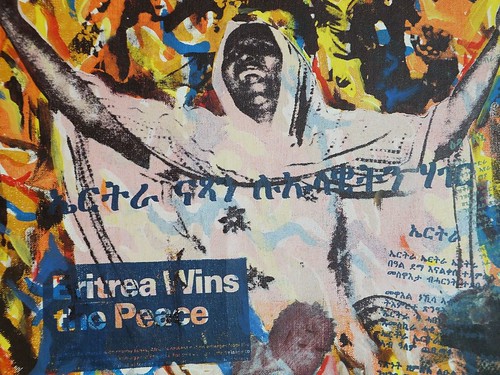 Unfortunately, oppression is now being imposed from within. Eritrea has been an independent nation since 1991, after it prevailed in a 30-year war against Ethiopia. Isaias Afewerki, war hero and former leader of the Eritrean People’s Liberation Front, is president, a job he has apparently liked so much these past twenty years that no elections have been held. Implementing the constitution has been indefinitely postponed, and any opposition to his rule is jailed. A free press does not exist, the economy is in shambles, and United Nations sanctions allege official ties to the Somali-based terrorist organization Al Shabaab. 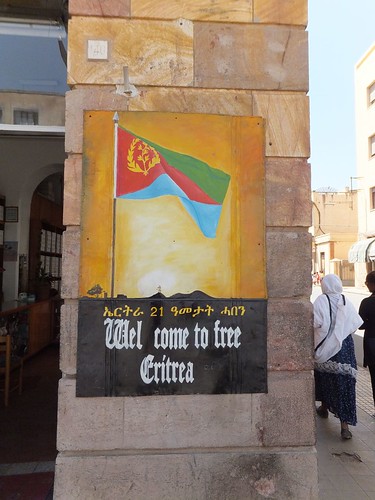 Two current graphic campaigns suggest, however, that Eritreans should have pride in their nation – as is. The campaigns try to promote a sense of national identity: one using painterly illustration techniques that typically depict heroic figures and the flag, and the other employing photographs of people from Eritrea’s nine ethnic groups and the words ‘I am an Eritrean. I am proud’ typeset in Comic Sans, apparently without irony.

Another ‘I am an Eritrean’ poster. 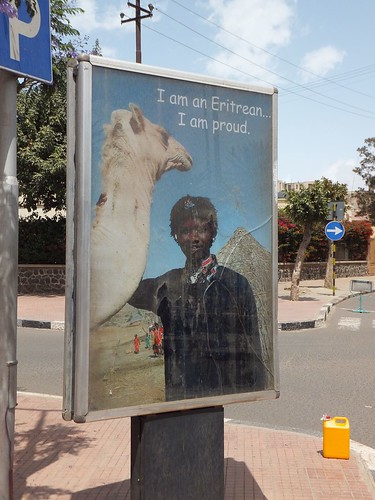 One ubiquitous illustrated image, of guerilla soldiers (‘Fighters’ is the term Asmarinos use) ascending a mountain and brandishing a flag, seems to re-enact the iconic Second World War photograph of American soldiers at Iwo Jima. Its triangular composition, view from below and rhetoric of collective action seems to suggest victory against overwhelming odds. The image is aspirational and idealistic, and of course, propagandistic.

‘Ascending Fighters’ icon with Laurel and Hardy statues in the lobby of Roma Cinema. 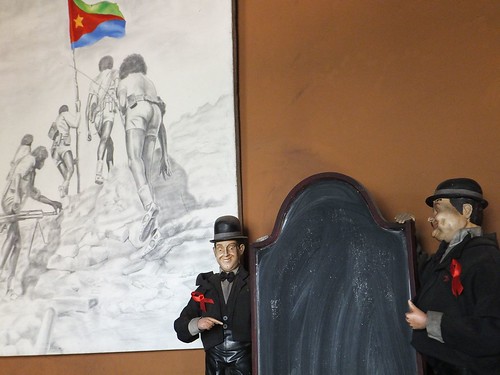 The photographic posters feature a variety of faces, as opposed to the singular mission of the anonymous Fighters, whose faces we do not see. Fit in standard street display furniture – often their metal frames are leaky or glass cracked – these posters depict a deadpan pluralism. With Eritrea’s multiple languages, cultures, histories, religions (primarily Muslim, Coptic Christian, Catholic and Animist), the posters attempt to show that ‘we’re all in the same boat now’. A dictator at the country’s helm is not a reassuring sign. 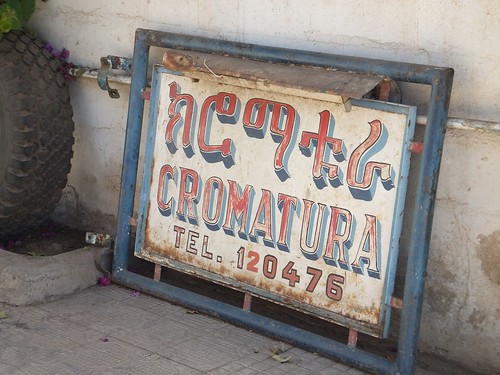 Asmara has an otherwise rich graphic landscape. Much commercial signage is simultaneously typeset in the Roman alphabet (typically English, a few still in Italian), in Arabic script and in Ge’ez, an ancient South Semitic language whose curvilinear characters resemble a less boxy Hebrew. Painted murals, large photographic propaganda posters and fly-posted obituaries share space with global brands such as Coca-Cola and Lufthansa. 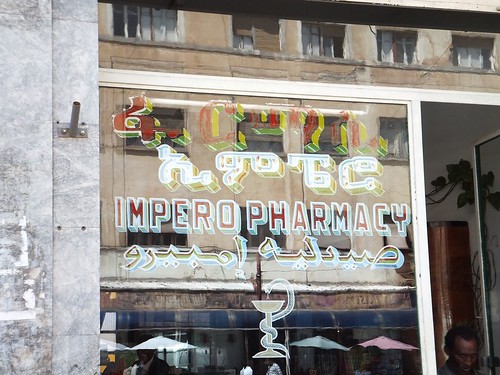 A national condom brand ‘Abusalama’ (meaning dolphin, a symbol of protection in Eritrea) is aggressively marketed. Besides billboards and posters throughout the city, and occasional empty packages on the street, the sole billboard on the road from the airport to town shows its brand image of a couple embracing and a dolphin frolicking, silhouetted against a sunset. More an illustration than a logo, it was apparently designed by Eritrean art students. While crude by Western design standards, the ‘frolicking dolphin at sunset’ image has supposedly increased condom use twenty per cent – even my hotel mini-bar had a pack. This represents a triumph of visual communication in the face of adversity. 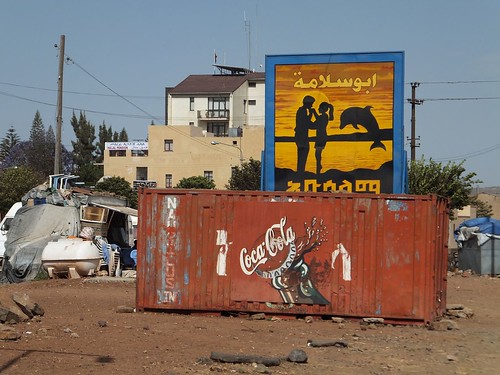 The Eritrean diaspora passionately voices its political opposition through numerous websites – the Eritrean Democratic Alliance site, for example, claims it ‘uses all the available means of struggle to topple the current Eritrean regime’ – and occasionally engages in direct action, as the February 2013 protest at the Eritrean embassy in London demonstrated. Rarer still was January’s brief take-over of the Ministry of Information in Asmara by dissenting soldiers, who are forced into military conscription until age 40.

I cannot say that I witnessed any graphic evidence of a political counter-culture while in Asmara. Until this happens, signaling a free press and tolerance of the democratic process towards Eritrean self-determination, the use of Comic Sans to build national identity is just a cruel joke.

As my project evolves, I’ll need to reconcile memories and experiences of the Asmara of 40-plus years ago with its current geo-political, economic and cultural condition – tempered by my own maturation and point of view. It will be a graphic mix of image-making, story-telling, mapping and perhaps through it all, the revelation of my inner Asmarino.

Photomontage billboard with the Eritrean flag. 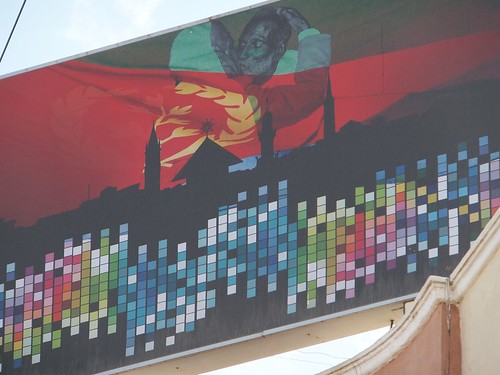