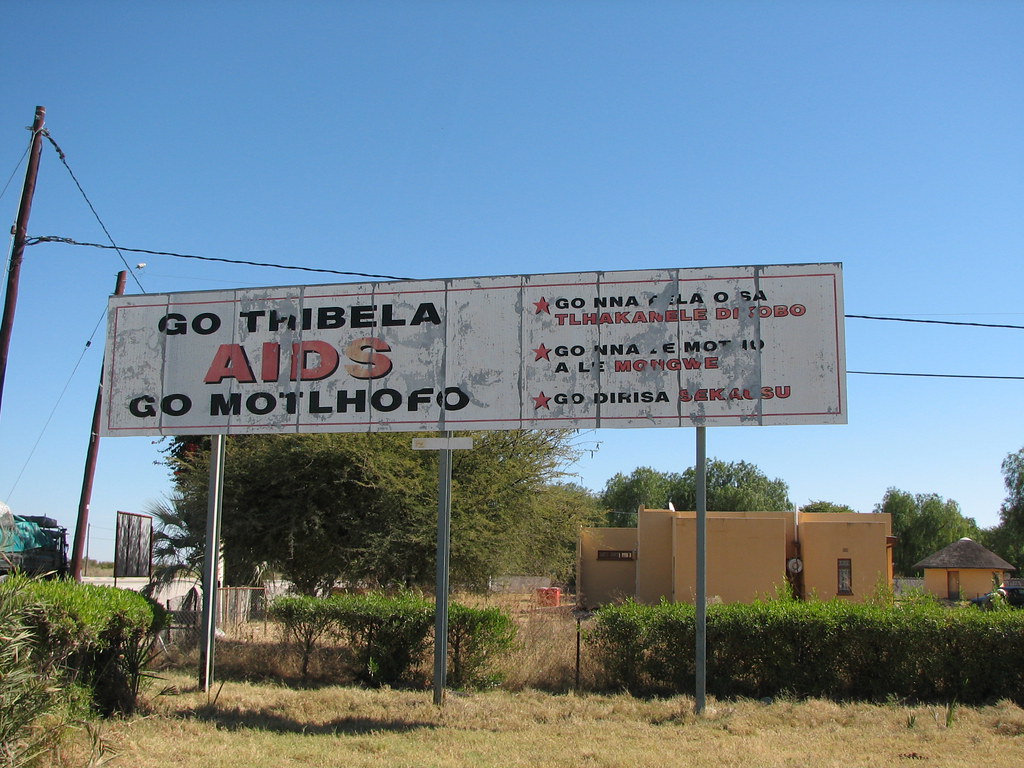 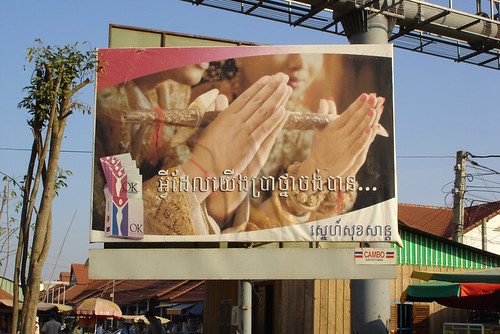 The problems of raising AIDS awareness and prevention has moved through a number of phases since the epidemic erupted in the 1980s. AIDS is a condition in which the immune system is attacked, making individuals susceptible to infections that often lead to death. The numbers of people with AIDS has risen from 8 million in 1990 to 34 million in 2010, split evenly between men and women. The numbers of people who have died from AIDS-related causes is 30 million. The steady growth of the epidemic has stabilised in recent years according to 2012 Worldwide HIV and AIDS statistics. 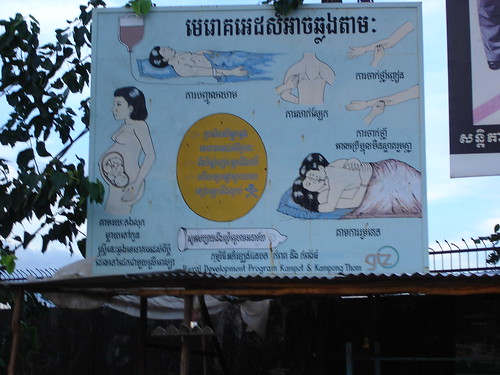 Above: Reads: ‘HIV can be transmitted through blood transfusion, scraped skin, injections using a shared syringe; from mother to child; and through sexual intercourse.’ Cambodia 2006. Below: Reads: ‘Beware of HIV transmission. Please use condoms.’ Cambodia 2006. 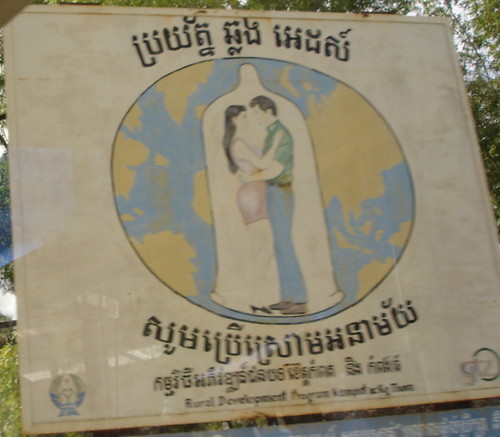 As more became known about causes and effects governments were spurred into implementing social awareness and educational AIDS prevention campaigns and programmes. Once it was established that a major method of transmission was sexual contact, governments were faced with the dilemma of developing marketing programmes that would address issues of prevention and avoidance in an area of culture that was embedded in traditional values systems – sexuality, religion and gender relations. It was an area steeped in denial. A further complicating factor was the different profiles in different regions: in the developed world it was homosexuals and drug users who tended to be most at risk; in the developing world, heterosexuals.

Tackling AIDS prevention with advertising campaigns is not an easy communication task for governments. In many countries sexual promiscuity is a taboo topic, and promotion of preventative behaviour can undermine deeply held values and assumptions. The issues of prostitution, sexual promiscuity and homosexuality are not always understood or even acknowledged.

In industrialised countries in the 1980s, when the epidemic first exploded and people were dying, governments gave the issue top priority, hiring big name advertising agencies, and launching major campaigns.

In developing countries, campaigns and prevention programmes were initiated by governments, aid organisations and NGOs. But due to structural readjustment programmes imposed on debtor nations in the developing world in the 1990s and 2000s, cuts in education and health sector meant that AIDS awareness programmes were badly affected: this is part of the reason for the high numbers of victims today in those areas. Communication of information about AIDS prevention has to deal with prejudices and denial about promiscuity, and deeply held beliefs about gender and sexuality. Religious beliefs are also important. In some countries homosexuality or adultery is punishable with death. 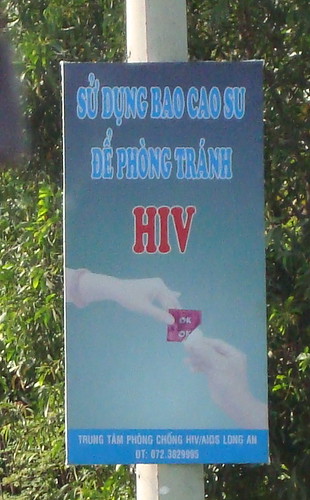 In recent decades, as medical advances in controlling the condition have improved, the death rate has become less dramatic. Government expenditure has declined, and major agencies moved on to other work. Much ongoing anti-AIDS advertising was taken on by non-government organisations (NGOs) such as AVERT. This lack of interest from Western countries has made it hard to fundraise for AIDS awareness projects.

The marketing manager for UNICEF New Zealand, Ellen McKeen, explains how difficult it can be to raise money for a project in Nepal to help women and children with HIV. Many of the women are widows who contracted HIV from their husbands who had returned from working in India. McKeen says: ‘If it was child soldiers it would be totally different. Child soldiers are high profile right now, and most of our projects are well funded. Raising money to support AIDS projects is difficult as people in developed countries do not understand the issues and hardships it causes for women and children.’

Key issues in AIDS awareness and prevention campaigns in developing countries include budget levels and the need to address illiterate parts of the population.

Last month (June 2012), in response to information from UNAids and WHO which demonstrated that circumcision could reduce the risk of AIDS among men by as much as 60 per cent, some Zimbabwean MPs were circumcised (in a clinic at Parliament grounds), as part of a campaign to publicise the information and inspire other people to follow suit. 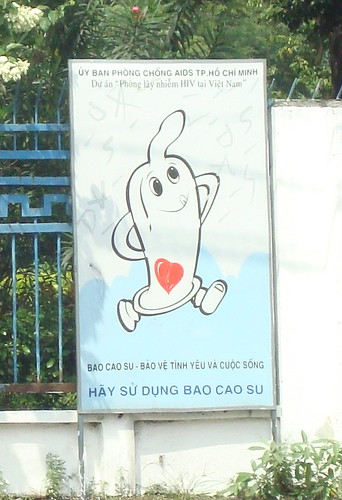 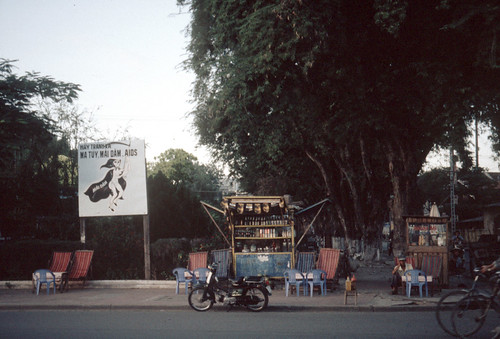 AIDS campaigns tend to reflect the level of development of the country, both in GDP and Human Development indicators. For example, Vietnam’s higher living standards are reflected in the greater range and sophistication of imagery in its campaigns – using photography, and daring to portray homosexual men.

In neighbouring Cambodia and Laos, two of the poorest countries in the world, campaigns use simplistic, mostly painted imagery, and focus on heterosexual sex. However the 1997 billboard from Vietnam (above) shows a much cruder ‘scare tactic’ approach, with its picture of the devil.

Eye is the world’s most beautiful and collectable graphic design journal, published quarterly for professional designers, students and anyone interested in critical, informed writing about graphic design and visual culture. It is available from all good design bookshops and online at the Eye shop, where you can buy subscriptions and single issues. Eye 83 is out now.